How to defeat The Dark Portal in Hearthstone’s Book of Heroes: Uther adventure 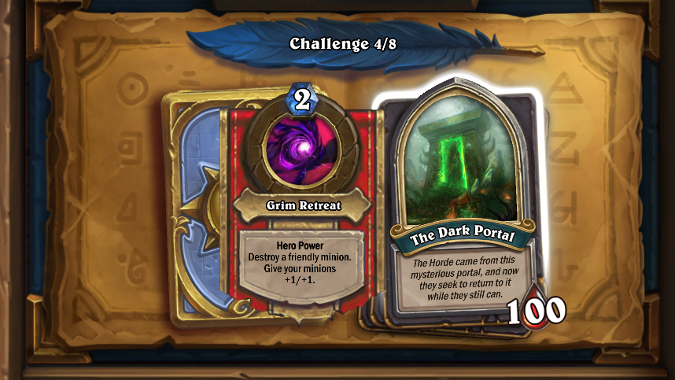 Struggling to destroy the Dark Portal, young Paladin? After the first three fights in Hearthstone’s Book of Heroes: Uther adventure, the Dark Portal is a step up in difficulty. On the surface, it seems like a simple fight. Use your one-mana Hero Power ten times and you win, but this is a case of easier said than done. The Dark Portal has an array of minions and surviving ten turns is a feat in an of itself. This fight is all about survival and making one big play to see you to victory.

With all of that said, let’s find out how to beat The Dark Portal as Uther in Hearthstone’s Book of Heroes! 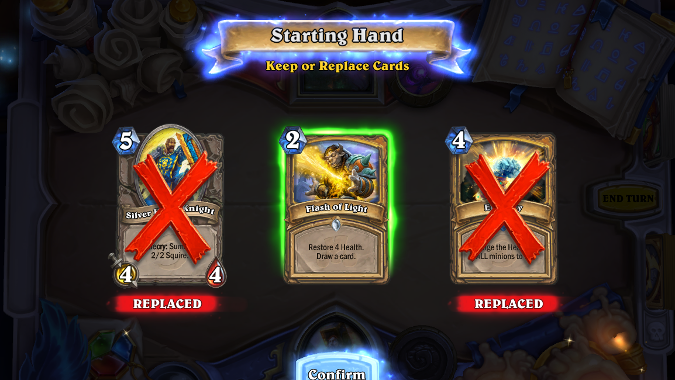 The early stages of the game

One of the annoying things with Book of Heroes: Uther is the AI gets a consistent mulligan. They have the same opening cards every single time you play the game: the Dark Portal always opens with a Void Walker.

You have no one mana cards in your deck, but you need to contest that early Void Walker, so getting Air Raid is a priority. Your deck has a metric ton of card draw, and you’ll need it because you have to find your two Time Out! cards, Equality. and Consecration. If you see one in the mulligan, it’s a keeper.

Survive and try to draw your combo

Since you don’t have any one mana cards, it would be nice if you could use your Hero Power on turn one to do damage to the Dark Portal, but without a minion on the board that isn’t happening. You’ll pass and the AI will play their Void Walker. Every. single. time.

Your turn two play is Air Raid to get two minions on the board. You won’t have enough mana to Hero Power, but at least you’ll have a board for next turn. Remember Air Raid is a Twinspell, so on turn three, use your Air Raid again and your Hero Power.

Alright, one down and nine to go. Continue to drop minions, but leave yourself one mana for you to use your Hero Power. 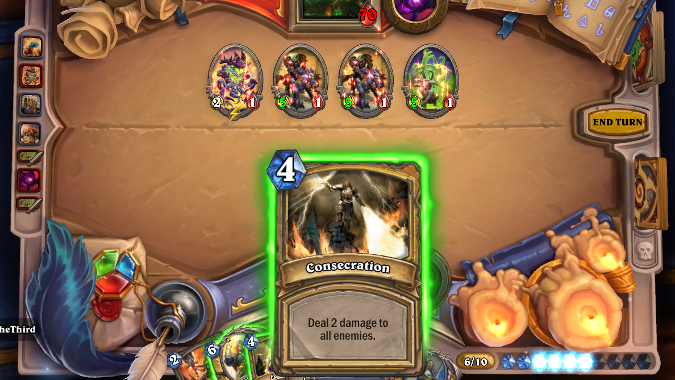 Going into the midgame, you should have the Dark Portal at around 70 hit points, but you’ll majorly behind on the board and out of taunts. Your goal now is to get to eight mana with both Equality and Consecration in hand so you can clear the board and close the game. You have two copies each card, and if you get both Consecrations in hand, you can use one to take some pressure off — but if you only have one, save it. Hopefully, you’ll also draw a Time Out! card or two. If The Dark Portal has lethal on the board, you have to use Time Out! to survive.

Flash of Light is a good heal and will draw cards to boot. Fight Trainer is a good target for Divert Forces, but you also might save those for your big heros like Tirion Fordring. Cards like Holy Wrath and Prismatic Lens are simply there for more card draw.

Try to give the AI something to hit besides your Hero. Throw down a Silver Hand Knight. The AI tries to keep your board clear and any damage on your minions isn’t damage to your Hero.

Keep in mind that The Dark Portal has an Bloodclaw Dragon and two Wolfriders. These Charge minions can put you into lethal range far sooner than you expect. It also has Wicked Whsipers (Discard your lowest card and give your minions +1/+1) and a Soulfire which can kill you. 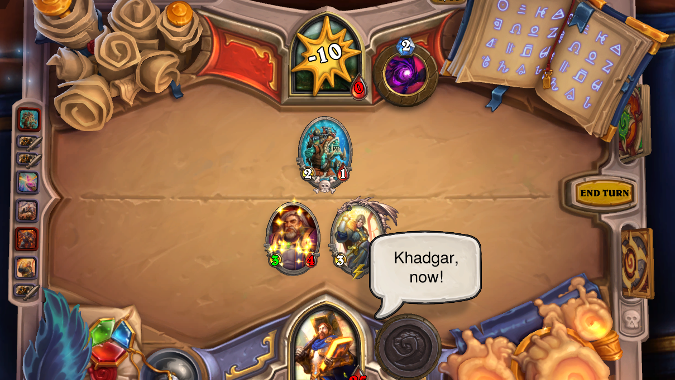 How to finish the game

You need one big board clear to win the game. Dark Portal has no card draw and will dump his hand. Once you pull off the combo, get Turalyon on the board and you’ll cruise to victory.

If have Equality but don’t have a Consecration, a Fight Trainer plus a Novice Engineer will do the same thing but for five mana instead of four making the whole combo cost nine mana. Getting to turn nine is a real challenge. Don’t try to set up two turn clear with the Fight Trainer where you use Equality one turn and the Fight Trainer/Novice Engineer combo the next. The Dark Portal will use Grim Retreat to buff its minions to two health and foil your combo.

There are several aspects to the design of this fight that make it frustrating, and I hope we don’t see these in future Adventures. By giving the AI the same opening hand each time, it makes each attempt feel repetitive. In addition, there’s one specific win condition. It reminds me of the Puzzle Lab mode from The Boomsday Project. Either you’ll get the combo pieces you need in time or you’ll lose, which can make for a frustrating fight.

The only silver (hand) lining is you only need to win once.

Blizzard Watch is made possible by people like you.
Please consider supporting our Patreon!
Filed Under: Hearthstone Book Of Heroes, Hearthstone Single-player Adventure, Hearthstone Uther, Uther The Lightbringer
Advertisement