The Queue: Nothing interesting happened today 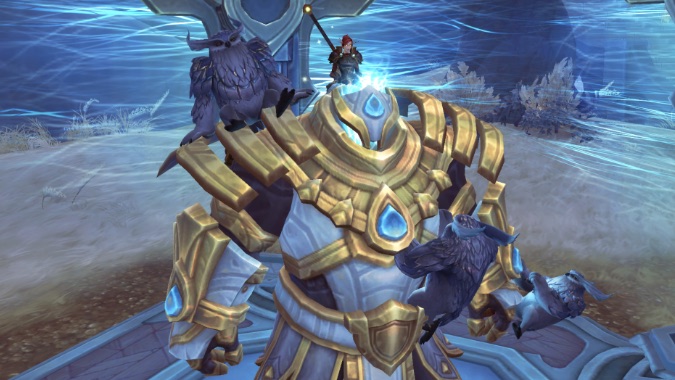 Other than going into the Maw and dying seven times because my Covenant commanded it.

I mean, I could say no, but the gear is so nice.

If a Venthyr bit you, would you turn into one?

Venthyrism is not a communicable disease, so you are safe. Venthyr mostly seem to drain anima from afar, without the need to get their hands dirty, so you probably don’t even have to worry about pesky bite marks.

However, draining someone’s anima without their consent really isn’t cool (whether it involves biting or not). If a Venthyr does this or attempts to do this, I suggest shining a flashlight in their eyes until they cower before you. I think one of those super bright LED flashlights would be perfect for this.

If you feared for your life, what WoW character would you trust most to protect you

Baine. He is the very definition of gentle protector. He will get in the way of anything that means his friends harm.

However, if I were on my Alliance characters, I would definitely go to Jaina. She would destroy anything that means her friends harm. Our resident Archmage has come a long way since Theramore.

And on the subject of Archmages, the one I definitely would not ask for help is Khadgar. Sure, he can stand up to any hazard the world throws at him, but there’s always the possibility that before he does, he’ll ask you to collect random crystals or severed body parts which he will immediately throw away. That would really slow down his response time.

Q4tQ: Is there any info on how flying will work between the SL zones? And if not, care to speculate wildly? Will we fly through those portals and then be automatically transported through the wormhole to Oribos and then back out to the next zone? Will this part be automatic (without us having to actively fly)?

Nothing official, but I strongly suspect Oribos will continue to be a hub and the zones will not be connected. Even with flying, that will mean it’s unfortunately slow to get around, which is frustrating — but I think that separation is what Blizzard was aiming for, aesthetically. Inconvenient, but it suits the concept of the zones well. YMMV.

MISTAH JAY [NOT A MOD] ASKED:

Druids have the neatest glyphs, that’s what dolphin form is. Some Druid forms, like travel form, can be modified with glyphs. This one turns you into a dolphin when you’re swimming, because, come on, haven’t you always wanted to be a dolphin? Secretly we all want to be a dolphin (at least sometimes).

Q4tQ: Liz, please give me all of your opinions on the Kyrian Covenant.

Whew. If you follow me on Twitter or keep up with the Blizzard Watch Discord, you know I am not a fan.

As an organization they are disturbingly cultish. They insist on obedience and servitude above all else, and require you to leave everything about your past life behind — in this case, literally. If you do not give up all memories of who you are and dedicate yourself to the service of Bastion and the will of the Archon, you will never ascend to being a true Kyrian, and you are seemingly not allowed to go anywhere else. You will simply spend your afterlife with the Kyrian lecturing you about the value of service and leaving your past life behind until you give in.

You are not allowed to doubt, which will send you off to Kyrian re-education camps, or result in physical punishment. There is a world quest in Bastion where you kill doubting aspirants to restore order. When Devos had questions about their actions, wanting them to investigate the Maw runes on Frostmourne, she was told to stop. There was no allowance to even discuss the matter.

As Eleanor once said, this is the Bad Place.

So the Kyrian have some… shall we say… structural problems. What are they doing about it? There’s a whole Covenant campaign to play through, so surely they are doing something!

No. They do not recognize that there are any problems with the Covenant and they are still entirely uninterested in investigating or confronting the Jailer. We have instead been working to rebuild our crest of ascension, which will allow us to make more ascended who can ferry souls to the Shadowlands. You know. The souls that we are throwing directly into the Maw without any concern whatsoever. We don’t talk about that or act on it in any way.

It feels like we are either incompetent, wholly devoid of empathy, or actively helping the Jailer. We’re the bad guys. We’re part of the problem. And the only ones who seem to see that are the Mawsworn who are, you know, the Mawsworn and serving the Jailer.

TLDR: The Kyrian are the worst faction and I have regrets.

Why don’t you go Venthyr if you dislike the Kyrian so much.

The main reason is Divine Toll, the Kyrian Covenant ability for Holy Paladins. This is a tremendously strong ability that shores up Holydin’s weak AOE healing with a 1-minute cooldown AOE Holy Shock. It feels really good to cast, is useful whether you’re trying to help someone or hurt them, it has an immediate impact on health bars, and it instantly gives you five Holy Power. It also has incredible synergy with our other abilities, like Glimmer of Light, a talented buff that heals whenever you cast Holy Shock on anyone, and Shock Barrier, a Legendary that puts a shield on anyone you cast Holy Shock on. Shock Barrier accounts for 10-15% of my healing in raids, depending on the fight.

And while the theorycrafters consider this the “best” option, it honestly just feels awesome. You feel powerful when you cast it. It feels really good to press that button and send sparkles of holy energy in every direction. I’d decided I was going to pick up the ability before there was theorycrafting to look at. It fits the “holy warrior” fantasy really well.

The other Covenants lack the same feel. Necrolords have a damage-dealing ability that powers up your heals after you cast it, and it’s fun for soloing but slots oddly into a healing rotation and really just encourages you to play like you always would. Night Fae have a buff that cycles between different buffs, and quite frankly when I tried to use it, I never knew what it was doing or why I was casting it — I’d just cast it and hope it did something beneficial. Venthyr are actually considered a viable option for Paladins, with a Consecration-like ability called Ashen Hallow that damages enemies and heals allies in it. It lets Pallies into the club of healers who cast stuff on the ground that the raid doesn’t stand in — and it is also red, so it definitely looks like a negative effect. Limit’s Holydins ran with this in the world first race, and it can contribute significant damage. I just thought it felt awkward to cast with the cast time.

So honestly it’s practicality here. They have the most useful and most fun ability for my spec, so here I am.

Also they gave me a wing transmog. Wings! I have wings now!

Hmm how about top 5 reasons a retired wow player should come back for a shadowlands?

I complain a lot, but I have been having fun. (Mostly.) So here goes:

So give it a go. WoW is always good to check out at the beginning of an expansion.

That is all today, my friends. Be kind, pet your dogs, and tell your loved ones you love them. I’ll see you back here tomorrow!