The Queue: Guess what’s about to happen 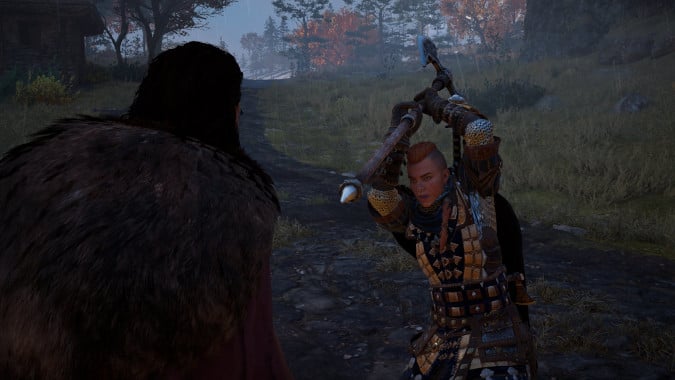 “Hey, have you met my friend Dane? No? Let me introduce you.”

CASSIE SAVED MY BUTT WITH A QUESTION

What is your favourite covenant cosmetic, and do you use any of them in your current look?

You know, I really don’t use any of them, and it’s a little surprising because I expected to, but to be honest I’ve ended up really liking the weird mashup of the Battle for Azeroth plate armor and going topless to mimic the original World of Warcraft cinematic vibe I have going on nowadays. 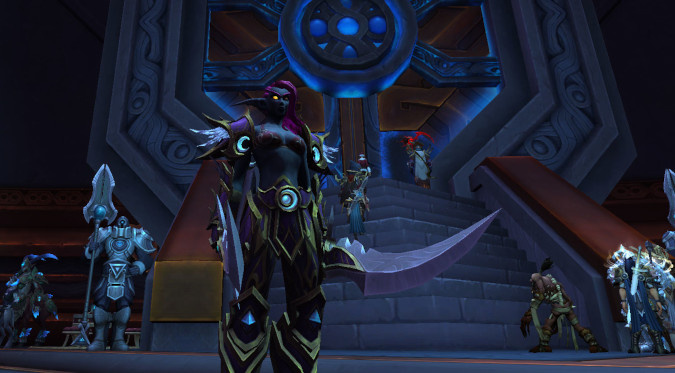 I go back to this look a lot and I’m really happy with it, and my Human just isn’t getting nearly as much love yet.

After several attempts at Mythic keys, I have decided that bear tank is for guild groups only.

See, even with my blindness, I’m an above average tank. I have enough spatial awareness and knowledge of how to mitigate incoming damage, I don’t stand in bad, I know how to generate and hold threat given a chance. But I won’t tank for people who aren’t friends/guildmates because it was simply too much like an extended multi-year experience in Aversion Therapy — every time I would decide to tank for a pick up group, that group was astonishing.

There were racist groups, there was the group where literally everyone including the healer ran ahead and pulled and blamed me when they died, there were groups that had that one guy who AFK’d at the entrance and everyone else seemed okay with it. There was the one group that kept insisting we skip the trash and then butt pulling it. There were the hurry go go go groups and the groups that wandered off in odd directions.

After literally sixteen years of this, I am well and truly unable to just queue up and tank things. I start twitching thinking about it. I even tried tanking in other MMO’s to see if it was just WoW, but no, it was the same in other MMO’s. Tanking is a thankless task, and I’m not doing it for people I don’t know anymore.

CAPTAIN CAKEWALK GOT ME THINKING ABOUT BIG PUBLISHERS

I’m surprised Ubisoft of all developers got this game (Immortals) running as well as it does on the Switch! It looks pretty neat too and holds a decent framerate. Plus it’s humour is right up my alley. :D

Keep in mind that Ubisoft is a massive company, with many studios — Immortals Fenyx Rising is made by Ubisoft Quebec, for example. It would be like saying I’m surprised that Activision-Blizzard got Call of Duty running so well after Warcraft 3 Reforged because almost no one who worked on the one game had much of anything to do with the other. So too with Ubisoft — the success or failure of one Ubisoft game is sometimes utterly unrelated to another.

This is complicated, of course, by those times that other Ubisoft studios do work on the same game. For example, Assassin’s Creed Valhalla had people from Ubisoft Singapore and Ubisoft Sofia work on it as well as the main studio in Montreal.

Each big game company has a different way of working this balance out. EA/Electronic Arts does not approach its studios the same way that Actiblizz or Ubisoft do, for example. When Microsoft bought Obsidian, it was under a different set of rules than when Sony manages its many studios. It’s one of the fascinating and sometimes demoralizing things about the video game industry, navigating how these entities operate.

Oh, and unrelated, but yeah, Immortals is great and feels at home on the Switch. Then again, it’s basically BotW meets Odyssey so it’s kind of expected.

Also, I’m not qualified to field all these questions about Druid Travel form, but I would like it if Warriors got to roll up into an armored ball and roll around like Samus Aran.

CORY ASKED ME A ODYSSEY VS. VALHALLA QUESTION

Am I wrong or is the Parkour and climbing not as good in Valhalla as it was in Odyssey?

I think it’s very deliberate that Eivor isn’t as nimble as Kassandra. Eivor is a brute force kind of person — even if you play the game as stealth oriented as possible, Eivor’s personality is a lot more blunt than Kassandra. Kassandra feels more like a blade in the ribs, whereas Eivor is, well, you saw the screenshot I opened this post with. Hey, have you met Dane?

That being said, I really miss Kassandra’s ability to just jump off of anything and superhero land without taking damage. Eivor just can’t hack it, and it makes me sad when I die because I mistimed a jump and didn’t quite aim for that hay wagon.

If a soul falls in The Maw and there’s no one to hear it does it make a sound?

The egg came first. Well before we had chordates there were likely egg laying creatures out there, ancestors to both fish and arthropods, just laying their eggs everywhere.

Yes. The sound of a soul falling in the Maw was created by Blizzard’s sound design team and is a stored file in the game files, it exists independently of anyone hearing it.

SIBYLLE ASKS ABOUT BLIZZCONLINE AND EXCITEMENT

Q4tQ: I really want to get hyped for BlizzCon, online or no (I’ve only ever had a virtual ticket anyway), but I haven’t even seen a schedule yet, and it feels a little weird. Is there anything I’ve missed? Alternatively, what are you looking forward to the most?

I don’t think there’s a schedule, but every time I think about the fact that we didn’t get a BlizzCon in November, and thus, we’re months overdue for Blizzard to make some big announcements I get really excited wondering what they have to tell us about Diablo 4 or Overwatch 2 or Diablo Immortal or any upcoming news for Shadowlands and any projects they’re working on now and I just am so, so dying to know.

Okay, that’s the Queue for this Wednesday. By the time you read this, I will hopefully have gotten some sleep.

Blizzard Watch is made possible by people like you.
Please consider supporting our Patreon!
Filed Under: Axe, Meet Head
Advertisement