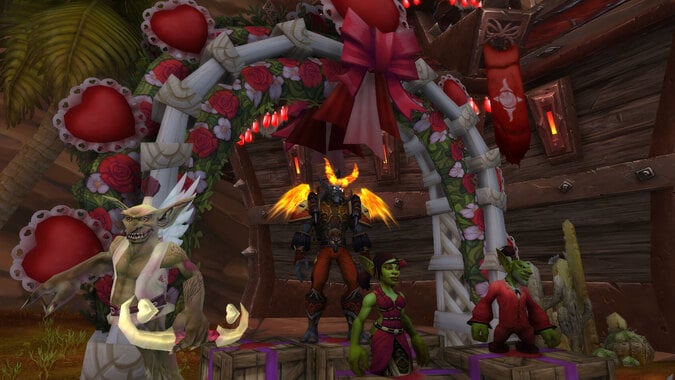 It’s a holiday! Right after a holiday. Who planned that?

While I get to the bottom of this mystery, it’s time for — The Queue.

I KNOW THERE’S NO ROXXII THE BELOVED

Is there President’s Day in Canada or is that why you’re still doing Mondays Queue?

We don’t have presidents soooooooo…

There is Family Day on the 15th, so we do have the day off. Yay! But, and I’m letting you in on a big secret here, I don’t actually write the Queue on Monday, I actually write it on Sunday. Don’t tell Liz.

AND NO LEFTY TO PUT ON

This QftQ is a two-for-one:

1) What SL zone will you be most happy (relieved?) to navigate when when we get flying?

2) Any (reasonably priced) recommendations for headphone/mics? Preferably wired, but that’s not a deal-breaker.

Ardenweald probably. I’ve spent the least amount of time there since Shadowlands dropped, and it’s mostly because it feels like such a large zone to get around. I really miss the speed benefits of flight there.

I like these— Good battery life, and solid sound quality. I’m not sure how reasonably priced you wanted, but if you’re planning on wearing them a lot, it’s not a bad idea to splurge a little more. It sucks to get pair of headphones and have them be something you hate wearing for long stretches.

I’m not paid by Corsair to recommend those either, but if someone from Corsair saw this and wanted to hook me up with a new pair, I wouldn’t say no…

TO THIS RED WE KEEP

Q4TQ: how many tabs do you have opened in your browser right now?

The Queue, and The Songs of Supergiant Games. Of the 83k views that video has, I’m easily 5,ooo.

Even at my wildest, I don’t usually go above ten tabs — and that’s when I’m grabbing item links and such forth from Wowhead. I know I find it pretty satisfying to finish something and close all of the tabs that I was researching from.  I don’t know how people with 30+ find anything! Doesn’t it feel cluttered to have so many things open?

For Blizzard Watch and/or the Queue – If Blizzard were to announce a new IP what type of game would you like to see? At first I was leaning towards a single-player RPG, but then a mashup of Civ III and Warcraft came to mind.  Instead of countries, you’d have Warcraft races with their own tech speciality (Night Elf Glaive throwers, etc). What would you pick?

Single-player ARPG like Assassins Creed: Odyssey/Valhalla. Azeroth is large enough to handle gameplay on that kind of scale, there’s plenty of talent/upgrade choices that you could build skill trees out of, and it’d let them tell a story with an end — barring the eventual sequels. If not that, I’d really like a Mario Kart, but with Blizzard characters.

Racers of the Storm!

AND THE RED’S, THEY GLOW

Q4Cory: who would be your WoW valentine?

Or do you mean who would I be getting a Valentine from? Probably my guildies who are like “come tank for us, it’s late and we don’t want to pug a tank.” At least I hope that I at least merit a Valentine from them!

Do you still think the jailer will be the final boss of the expansion?

In the early Shadowlands hype, they were talking about him like he would be. However, in more recent interviews Blizzard seems to have been hedging their bets a little more. He would make for a good final boss, but I’m leaning more that he’s something we’ll deal with in the 9.2 patch — like Queen Azshara. We’ll beat him up only to realize that the Stewards were the true threat the whole time and we’ve played right into their hands. Have you seen those Stewards in Torghast, we always thought the Jailer had captured them, maybe they’d actually been running the place!

More likely it’ll be Anduin or the Arbiter who get jammed full of the Jailers energies as we defeat him. Imagine fighting a planet-sized Anduin while the universe hangs in the balance. It’s a little absurd, but I bet the loot would be out of this world.

AND THE ROXXII THE BELOVED SLIPS AWAY

How goes prog with raid and KSM?

We just had our best attempt on Heroic Sire — 9%. What a fight! We’ve put more pulls into him than the first two bosses on Mythic combined and I’m super ready for him to die. He’s super well made, we’re just being slow to handle his mechanics properly and it’s costing us. We’ve only had a handful of attempts last into his final phase, so it’s pretty nice to see that we’ve already gotten below ten percent.

KSM is a little tougher, I used to have a really solid crew of people to run keys with, but we’re all busy with the real world and our own guilds right now. So I’m not as far along with that as I’d like. Too many pugs, not enough hugs. I do have one +15 timed, and some others, but I still don’t have +10s in De Other Side, Necrotic Wake, and Sanguine Depths. I’ve only run one M+ Sanguine Depths this entire expansion — people just don’t want to go there.

Happy Belated birthday to Sibylle! Hope it was great!!

For the rest of you — stay warm, dress in layers, and leave Anna some questions for tomorrow!