The Queue: In the long dark night of the soul it is always Mythic Tomb of Sargeras 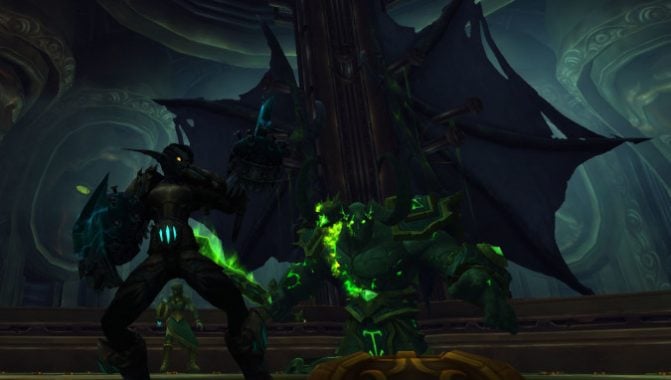 Couldn’t sleep, head full of bad thoughts, and so it was time to run Tomb of Sargeras on Mythic, and it went better than I expected. Died a bunch but managed to clear it and kill Kil’jaeden, so that’s good.

SIBYLLE ASKS A QUESTION ABOUT QUANTITIES

Q4tQ: Complete the sentence “In WoW, you can never have too many…” Elaborate :-)

I mean, here I am, awake at 3 am running Mythic Tomb of Sargeras by myself. Clearly I need more friends.

TETSEMI ASKS ABOUT WHAT GAMES I WANT BLIZZARD TO MAKE

If Blizzard were to announce a new IP what type of game would you like to see? At first I was leaning towards a single-player RPG, but then a mashup of Civ III and Warcraft came to mind. Instead of countries, you’d have Warcraft races with their own tech speciality (Night Elf Glaive throwers, etc). What would you pick?

I want them to unironically make Vengeance of the Vanquished. I want a big Blizzard brawler, a straight up Street Fighter or Mortal Kombat inspired beat ’em up starring all of their now-deceased bosses from their various franchises.

I am absolutely not kidding about this.

I also want them to make a tabletop RPG division and start making RPG’s. Not computer games, actual pen and paper RPG products, like an Overwatch game using the Mutants and Masterminds system.

QftQ: do you double-dip and post in the BlizzardWatch discord too? Or are you strictly a Queuvian?

I browse the discord myself, but I don’t post.

I don’t really post much to either, aside from occasionally writing the Queue.

I don’t know if it comes across — when I write, I tend to be a fairly loud and if not aggressive than certainly a large personality, but I’m actually quite shy and reticent to interact with other people. It always feels like I end up doing or saying the wrong thing, and so, I often avoid interpersonal conversations. Hence why I’m not a very prolific poster to our Discord or here in the Queue.

I’m very much an introvert.

so, i tried to do the next section of floors for Torghast last night (full disclosure, it’s the second set, so i know it’s old news for almost everyone but me). let’s just say it went… badly. very very badly. who’s that big guy that comes stomping in and kills you if you run out of deaths? yeah, met him last night. didn’t realize that was even a thing, and it was so ludicrous all i could do was scream in terror and laugh at the same time. good times. Torghast is… quite a ride. lol

You know, I have had some of the weirdest experiences in Torghast. Some times it’s very easy, almost a breeze, others it’s ludicrously hard. And it’s not just because it’s a specifically hard wing, I can have two back to back experiences in the same wing and just no idea why it was a grueling nightmare one night and fairly easy and breezy the next.

I feel like Torghast is all over the place. Fun at times, but really not consistent.

MALKIL, THE DARK FIRE WENT WITH AN EASILY ANSWERED ONE

On the subject of bread, what’s y’all’s favorite sandwich bread?

Q4tQ: when do you think it’s okay for a company to let a franchise go?

Asking because I’ve been thinking about the lack of Starcraft at BlizzConline. It’s the only major Blizzard franchise that doesn’t have anything going on these days. Would it be better for Blizzard to try to keep Starcraft around one way or another, or should they just let it sit unused until they have something really good that can bring it back?

(sorry if the wording on this isn’t great, I’m also not great right now)

I mean, StarCraft came out in 1998 and StarCraft 2 came out in 2010. That’s a solid 12 years between releases. So it’s safe to say that Blizzard seems to feel okay letting their franchises sit fallow if they don’t have any ideas for them that feel like a compelling release candidate. StarCraft 2 also saw years and years of releases, with Legacy of the Void coming out in 2016, so maybe it’s okay to let the game cool down for a bit.

Honestly, I think letting StarCraft sit for a bit might not be a bad move, what with both Warcraft and Diablo currently rolling and Overwatch going strong, it doesn’t feel like Blizzard needs to push the franchise to produce. That being said, I’d love to see something that did a fresh new take on the lore of that game. And I still love the Legacy of the Void cinematic.

The Swarm brought ruin to our world, so I’m gonna go try and get some sleep now.

Blizzard Watch is made possible by people like you.
Please consider supporting our Patreon!
Filed Under: The Kalah
Advertisement