The Queue: Anything she wants 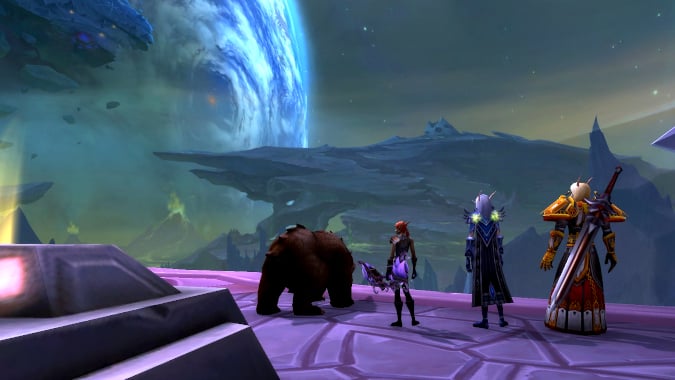 You ever go back to old content and are kinda struck by some of the things we either left unfinished, or just washed our hands of without thinking about the potential ramifications of the people and creatures which were thriving — or at least surviving — up until our intervention, after which they are all but certainly doomed without further help from us? I feel like this could be a metaphor for something. Maybe an allegory, even.

This is The Queue, where you ask us questions and we swear we’ll stick around long enough to answer this time. Probably.

Q4tQ: What do you consider to be the most iconic music in World of Warcraft?

I know that at least half the playerbase will disagree with me but for me the Stormwind theme is just so instantly recognisable.

To me, iconic means it can be recognized by people who aren’t the diehards. As much as I just adore the Arthas, My Son theme, and as much as I’m just dying for somebody on TikTok to do the whole sea shanty thing with Daughter of the Sea, I think the one song that qualifies is the original opening theme.


For me, this theme is iconic for two reasons. The theme itself is a big one. The combination of the victorious, slightly menacing longer, low brass notes combined with the quick notes from the strings and high woodwinds give the effect of running into battle, and it’s a really good hype track as a result. The other thing that makes it iconic is tied into those two aspects: It’s mostly in a 7/4 time signature, which is used super rarely, but it really contributes to that strident running forward feeling of the whole piece. Plus, like I said, this is one of the few tracks from WoW which is instantly identifiable as WoW.

Q4TQ: I am trying to farm the Rhinestone Sunglasses recipe off the Cata world bosses but didn’t play back then? How frequently can they be looted? Every kill? Once a day? Once a week?

I’m pretty sure these are rare elites and not technically World Bosses in the same way as, say, Mortanis is the World Boss for this week, so you should be able to loot them every time they’re up (so, every four hours or so).

That said, it seems like a better idea just now to pursue the mats, as opposed to the actual item, especially if you’re going the Goblin route of profit-seeking. If you’re just determined to get the pattern, I get that, but those Dream Emeralds in particular are zooming to the moon.

Pick any WoW character you’d like. What would be their Earworm? For example,

Okay so, first of all, Rossi, I’m so sorry for how hard this is going to derail the comments section (but also not sorry).

Now, here’s the thing. While I’m flattered that you think “Nothin But A Good Time” is somehow representative of me, uh. No. And also, an earworm is just a song that gets stuck in your head — it doesn’t matter who you are, your personal music tastes, once you hear LOVE me LOVE me, you’re done, that song is in your head for the rest of the day.

That said, What Ever Happened To My Part from Spamalot is Wrathion’s Theme, both from the fact that he drops in and gives huge chunks of explication and then goes missing for a couple expansions, and because it’s scenery chewing drama.

As we’re rounding the corner on the anniversary of March, right now, for me, the point is Bagel Sunday.

If you’re in our Discord (and if not I’d suggest it), we have a channel all about food, #Lavish-Suramar-Feast. Every Sunday for the past few weeks, I’ve been making a batch of homemade bagels from scratch, with the water and everything, and sharing pics so you can all feast your eyes.

After the bagels cool, I make myself little breakfast packets for the week. I usually slice some cucumbers and shred up some carrots, because I like them on my bagels and they keep well, though I keep them separate because I really like my bagels toasted. I’ve been on the search for sprouts because I feel like that would be excellent too, but I’m having a tough time tracking them down. I also cut up some fruit or just wash some grapes, which is something I typically don’t have the energy for in the morning. With all that fruit, I don’t need a full bagel, so I cut them in half — this also helps them last longer, and helps me control my portion sizes, because the Quarantine 15 is real.

The thing is, making up these stupid little breakfasts give me something to look forward to. I like food, but my breakfast was usually boring and not all that healthy. Cereal. A pot of coffee. Meh. But just thinking about my silly bagel, I’m excited for tomorrow morning because I get to have a really good breakfast to get me going.

And hey, maybe Bagel Sunday isn’t your point. Maybe your point is air guitar to conclude your zoom workday, or a shower beer, or carving out time to write, or even just the fact that baby ducks are. There are little things that just make it completely worth it to get out of bed, maybe even put on real pants — unless, of course, your point is Naked Tuesday. I also started a YouTube channel to read books, and joined a makeup group with some friends on Facebook to further that sense of purpose and give myself goal for the day after my bagel. I know it’s an artificial thing, but at the same time, I’m finding that doesn’t really matter all that much.

As we’re entering Year Two, I’m finding it important to affirm this kind of thing for myself, and I just kinda hope that my doing so can help you find yours, too.