The Queue: I can’t wait for my BC clownsuit 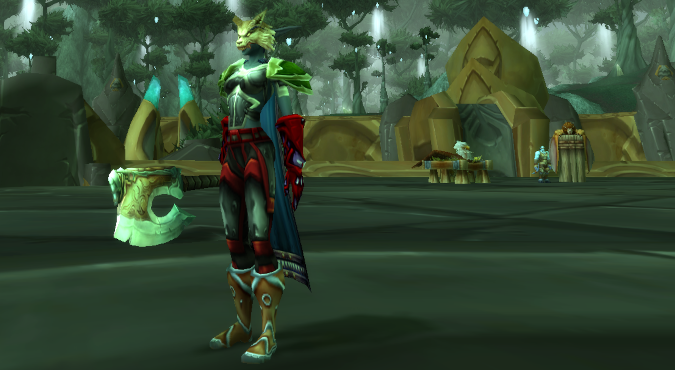 What you are looking at in the header image is an accurate recreation of what a leveling Warrior (or Paladin) would likely have been wearing by about level 67 or so during The Burning Crusade.

Most of it is quest gear, although the weapon is a dungeon drop. And yes, it really did look that bad.

I’ve seen less gear complaints lately, is it that enough time has passed that everybody got the gear they needed or have we come to equilibrium with the difficulty of loot drops in SL?

I can’t speak for anyone else (which is made clear by the big book discussion thread, where several of my favorite novels get clowned on by you all) but for me, I’ve stopped caring about my gear entirely. It’s never going to drop, there’s no point in getting upset about it.

And seriously Gravity’s Rainbow is a work of genius just short of Samuel R. Delany’s Dhalgren.

I mean, all jokes aside, it’s pretty fascinating that we can seemingly convince ourselves that the Berenstain Bears were actually the Berenstein Bears all along, or that Sinbad made a movie named Shazaam about a genie, or that Nelson Mandela died in prison in the 1980’s when he was alive and even became President of South Africa after he was released. I think we do this for a variety of reasons involving how we form memory and how we can be made to edit our own thoughts by group pressure, but it’s fascinating nonetheless.

Wonder how metzen felt when he hears about Oribos. As weve discussed its inevitable since most fantasy is at least losely based on similar inspiration, but he was prob like “awww man, cmon :/”

Both Oribos and Auroboros are based off of the Ouroboros, an Egyptian symbol that entered Greek Mythology due to cultural contact between the two civilizations. It’s a fundamental mythological concept that appears in many world myth cycles, with beings such as Vritra, Jormungandr and it’s even been used to explain the chemical structure of Benzene, as well as featuring in E.R. Eddison’s novels.

I’m fairly sure Chris knows that he didn’t come up with it and wouldn’t mind seeing it used somewhere else.

I found a Pitchfork in the bank of an old Horde character when I was going through her stuff before I deleted her. I have no idea why I saved it, but I remember leveling in that area during BC. She was a rogue and couldn’t even use it, so I was just thinking… why did I save that?

My old Paladin who has been sitting in Darnassus since TBC and who I guess is on fire now has a stack of Symbols of Divinity in her bags. That’s the weirdest thing I’ve held onto, I think.

I deserve a prize for resisting the urge to make this entire Queue about the books y’all listed as bad that are, in fact, good. I nearly had an aneurysm here. I don’t personally enjoy Salinger’s The Catcher In the Rye, but Pynchon’s Gravity’s Rainbow is one of my favorite books of all time, as is The Grapes of Wrath and Heart of Darkness is up there, too. Taste is subjective, but it was physically painful to see these books listen in that thread. I was just relieved nobody mentioned The Sound and The Fury or I’d probably have fainted dead away.

Taste is subjective. Anyway, Dhalgren is a masterpiece.

Blizzard Watch is made possible by people like you.
Please consider supporting our Patreon!
Filed Under: Dhalgren Is A Masterpiece
Advertisement