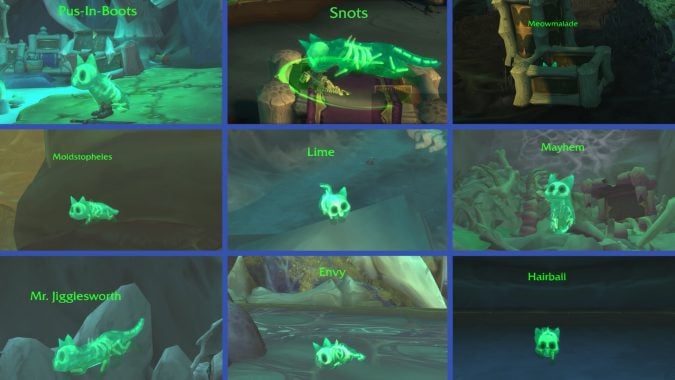 Ever since they were first datamined, jelly cats have been an instant hit with the WoW community. You can obtain one, Jiggles, as a pet from the Necrolords Renown reward system, but there is also an Achievement associated with nine of them scattered throughout Maldraxxus and the Plaguefall dungeon. If you pet all of them you will be rewarded with the Nine Afterlives achievement and the Jiggles Favorite Toy laser pointer.

Below is a map with the locations of all the jelly cats and how to get to their locations — some of them require a bit of parkour. But if you want a more in-depth guide, check out this short video we made that covers them all. It also shows you how to complete the tricky jumping puzzle required to get to Moldstopheles.

If you have an addon that tracks your waypoint location like TomTom, you can follow the coordinates below. If not, the video above will walk you through all of the locations. First here is the overview of all the locations of jelly cats to pet. 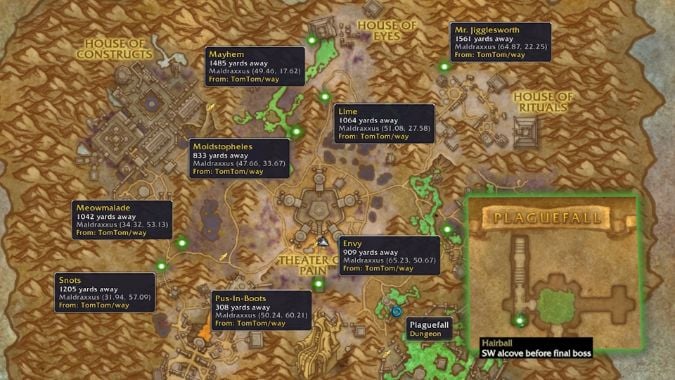 Here is my suggested route. Start from the flight point in the Theater of Pain, head south towards the bridge then under the bridge where you’ll find Pus-in-boots. 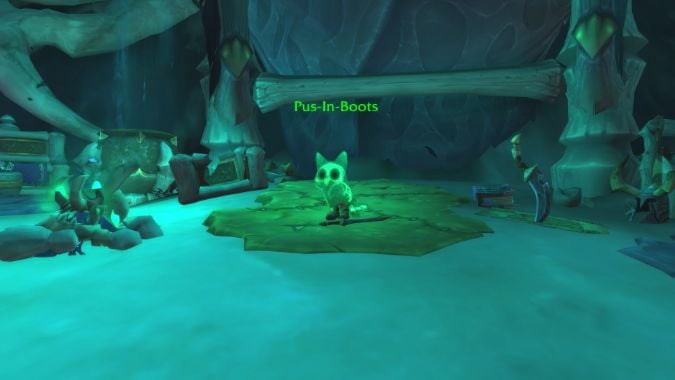 From there, head west to Snots who is sitting just off the road eating some fishbones. He is very easy to spot. 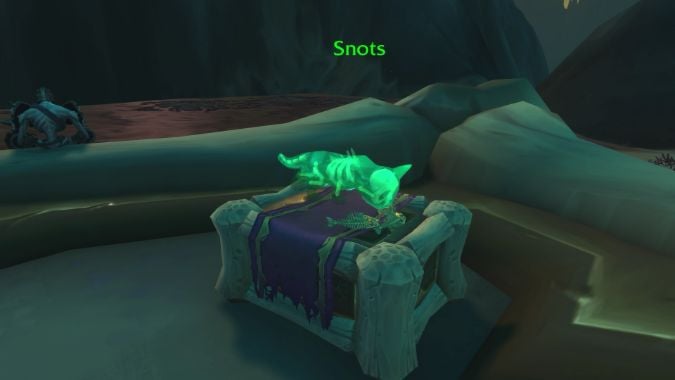 For Meowmalade, head a short distance north east. He is sitting in a crate behind the wyvern. 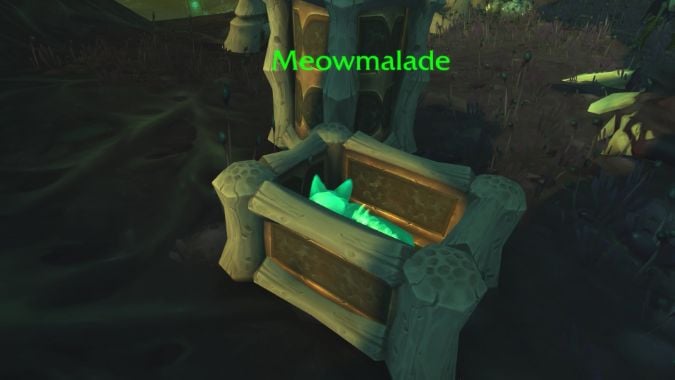 For Moldstopheles, head back to the Theater of Pain, then north on the road. You will see a tunnel on your left almost immediately. Go through it and as you come out the other side, look up and to your right. Moldstopheles is sitting up in a tree. Getting to him requires a tricky jumping sequence. Check out the video for tips on how to get to him. 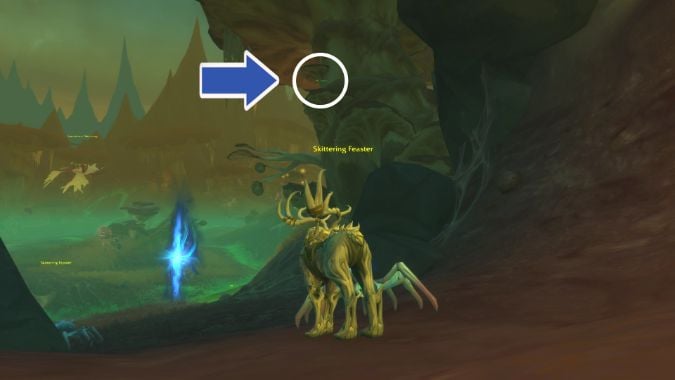 The short version: head around to the back of the tree and jump up to the first two mushroom outcroppings you see. The third jump requires you to land right on the edge of the mushroom Moldstopheles is sitting on. If you are having trouble hitting that very exact point, the Venthyr Covenant ability Door of Shadows will allow you to bypass the jump. 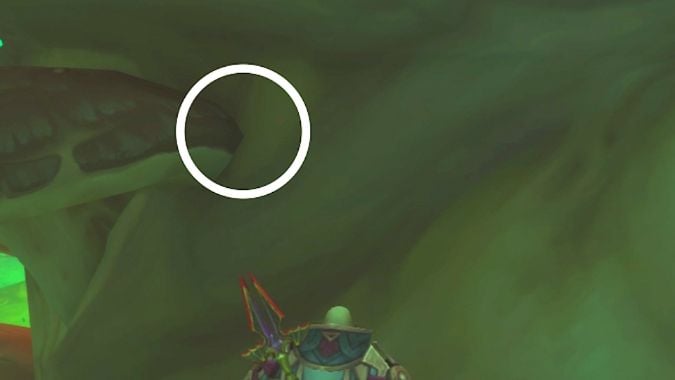 For Lime, head back through the tunnel and then north. You will see two bone archways over the road. Lime is sitting at the top of the second one. Head to the base of the archway on the left and it is easy to then walk up to the top and give it a pet. 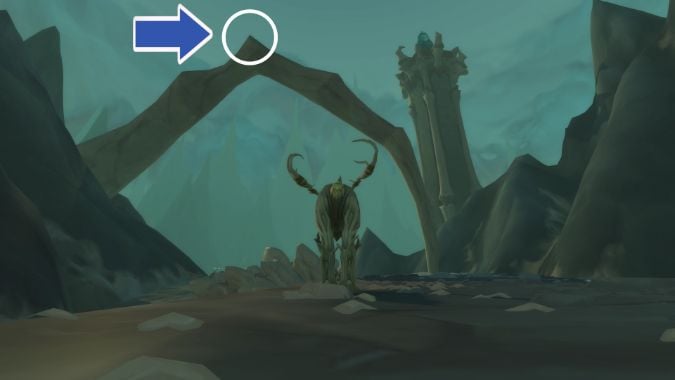 For Mayhem, continue north to the House of Eyes. Though the waypoint shows Mayhem on the right side of the building, to get to him you must enter the courtyard on the left side then turn right and jump up the rubble. 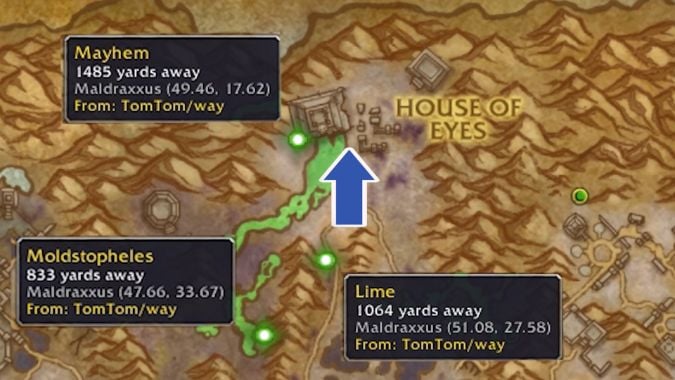 For Mr. Jigglesworth, head south east and loop up to the north west section of the House of Rituals. 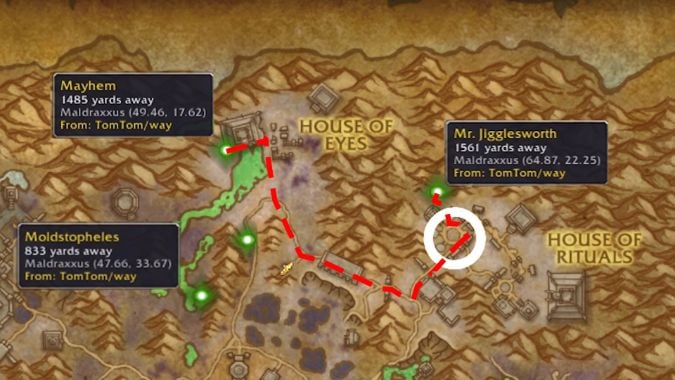 Once in the circular courtyard, face north west and you will see a path leading up the mountain. He is at the end of that path. 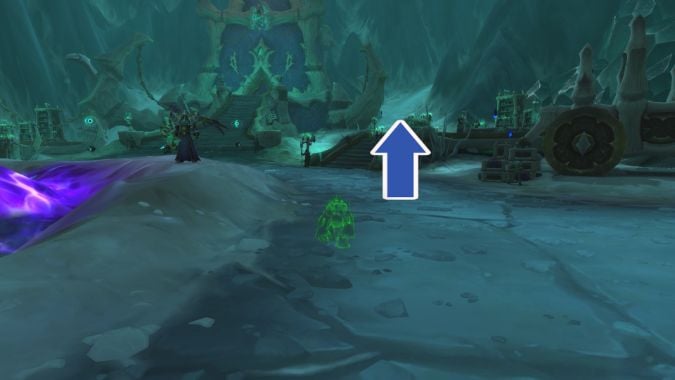 For Envy, head south to the swampland where you will find him chilling in a pentagram, like cats do. 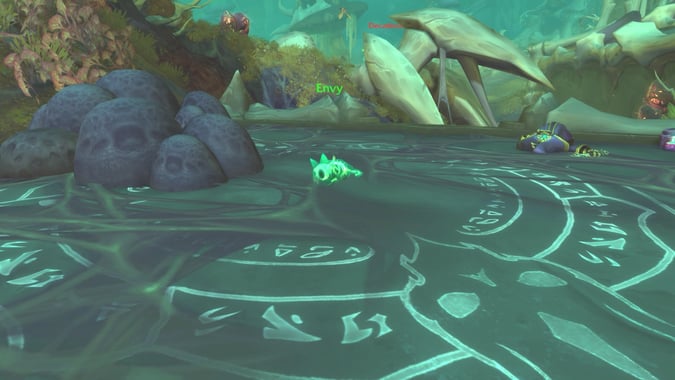 The last jelly cat, Hairball, is at the end of the Plaguefall dungeon in Maldraxxus. Gather a team and fight your way to the end. When you jump down into the sewer to face the final boss, you’ll find Hairball in an alcove  to the west. You can easily backtrack after the boss kill to pet him. 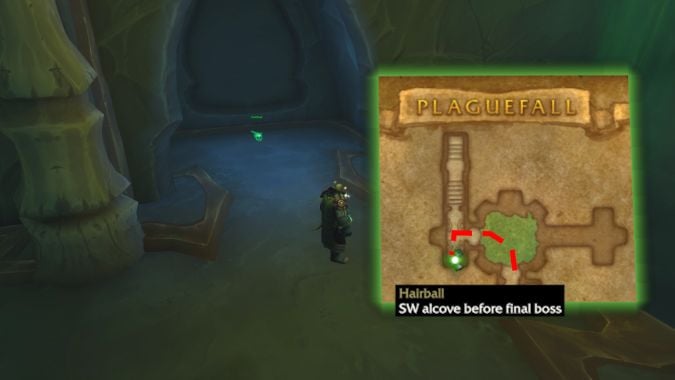 That’s it! You are now the proud owner of laser pointer. Also, here is a list of all the waypoints mentioned: