The Queue: Nobody here but us chickens 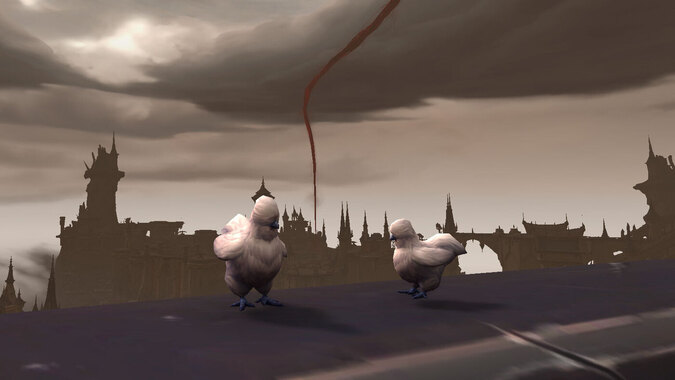 Q4tQ: do you think hunters on Azeroth ever have trouble with their pets in cities? I’m sure that working animals are common enough that most of them aren’t a problem, but then someone strolls in with, say, a wind serpent, or a wolf with glowing eyes, or an entire mammoth, and you just have to take their word that the animal won’t kill anyone or start a stampede or eat the entire market or whatever else. I feel like there have to be times when the city guards flip a coin to see who gets to tell the heavily armed outdoors-person that they can’t bring their devilsaur into the city.

Stampedes and all of the orphans mysteriously disappearing after Dinosaur Tamer Johnny visited town are definite problems, but I think there’s a more omnipresent one that isn’t being considered. Where are all of these animals pooping.

Cities like Suramar and Silvermoon don’t have to worry about it so much, there are plenty of robo-street sweepers and enchanted brooms to clean up any messes. But I have to imagine that people are up to their wastes in leavings in Orgrimmar and Stormwind. A bunch of Tauren just rode their Kodo’s over from Thunder Bluff, and boy can those things pack away the food. Hope you didn’t just buy new shoes.

It probably isn’t as big of a problem in Ironforge, since there’s all that open lava all over the place. Hopefully, the Lord Commanders prize battle-hippo doesn’t introduce any extra impurities into the mix though.

I do have to wonder about some of the Old God things we’ve been riding too. I assume that generally, something like the Ny’alothan Allseer or any number of the N’zoth worms are just leaving low-grade nightmares behind them. What do they eat, and what comes out the other side? I pity the janitor that has to clean up the residue of a multi-dimensional beings last meal.

Q4tQ Do you think Garithos will show up in Shadowlands?

There are a few people like Garithos that we all just assumed we’d see in Revendreth and we still haven’t bumped into them. That we haven’t by now I’m leaning pretty heavily into the no section. His story was told as much as we needed it to be back in Warcraft 3: The Frozen Throne, and of the slate of dead character cameos that they could still slide into the different areas of the Shadowlands, I think there are better choices — like General Nazgrim, Admiral Taylor, or some of the more famous dungeon bosses we’ve beaten over the years. Although Wowhead did just find a Vanilla boss in patch 9.1 that has been reincarnated as a battle-pet in the Jailers service.

There should be nothing preventing you from using any of the three Shadehound mounts that can be ridden in the Maw for your fresh characters taking their first trip through there. You earned them, now it’s time to flaunt them to all of your friends!

HELPLESS PEOPLE ON SUBWAY TRAINS SCREAM, BUG-EYED, AS SIBYLLE LOOKS IN ON THEM

Price of the rank 4 legendary base (head) my shaman needs: 124k

Price of the rank 4 legendary base (cloak) my druid can make and sell: 5.5k

Blame the ease of farming any kind of cloth, with how many skins it can take to make just any one of the Leatherworking items. That there are two full sets of armor that come from the same source just compounds how annoyingly expensive it is to make any of those base items.

If you’re looking to make some gold at the launch of patch 9.1 you might want to have a pile of Calloused Hides ready to list on the auction house. Between new ranks of legendaries and new legendary powers — you could make a tidy sum.

HISTORY SHOWS AGAIN AND AGAIN, HOW NATURE POINTS OUT THE FOLLY OF RED

For example, imagine that after completing the Venthyr campaign, your character can talk to a friendly Bronze Dragon (or something) and gain access to a timey-wimey version of the other three Covenant campaigns, completing them as well.

You would experience the story and gain any rewards that aren’t Covenant-specific. So if you wanted the “ideal” experience where you got to reap all the rewards, you’d still want to do it on alts. But if you don’t care about that and just want to see the full story, you could do it all on a single character.

Same thing could be done for Alliance/Horde-specific questlines, and maybe even for class-specific content (your Rogue gets to see the Ashbringer questline without getting the actual Ashbringer in the end).

Yeah, that would be nice. I always have such lofty plans to see all of the content and level multiple characters between the Horde and Alliance, but then I get sucked into gearing my main or stabbing butts in Odyssey and Valhalla, or taking another trip around the Milky Way when Mass Effect Legendary comes out later this spring. I’d love to be able to just run through the other Covenants stories without having to worry about what my Renown is, or getting the gear that makes the quests easier.

It could be a little tricky to hold multiple quest chains bookmarked for your character on the Blizzard side of things. Not to mention just personally remembering where you left off or where you’re going can be a little daunting sometimes. But those are both problems that I’m sure they could solve.

I’ll see you all Monday, Have a safe and happy weekend everyone!