The Queue: It’s our time in the sun 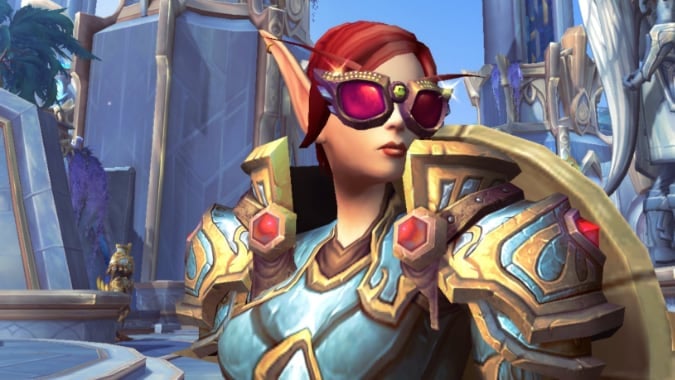 Which is, obviously, why we need to wear sunglasses.

Q4tQ:
Do you think that the announced date of June 1st for the release of BCC indicates that it’s unlikely we’ll have a June release for patch 9.1?

I genuinely don’t think they have any relation. I feel like we’re on a “when it’s ready” schedule for patch 9.1… which could mean June. Or July. Or something else entirely.

While I can imagine Blizzard planning big release schedules so as not to stack things, I just doubt that patches fall under that same kind of consideration — particularly 9.1, which is already one of the slowest first patches the game has ever had. In a recent interview, Ion Hazzikostas mentioned that Covid had caused delays, and I don’t think they’re going to hold the patch any longer than they have to. It will be ready when it’s ready.

QftQ: If we are going to move away from borrowed power in future expansions, do you prefer a return to the pre-Legion status quo, or the creation of a “borrowed” power system that carries over from expansion to expansion?

I think both options have their merits, but I’d probably lean a bit more towards the latter since I do like the idea of going out into the new land and acquiring new powers/techniques from the allies and enemies we find there. There are a lot of potential pitfalls, but I think they are mostly solvable or aren’t dealbreakers.

I’m not so sure we necessarily need to choose one way or another. Couldn’t we walk into the next expansion, learn some new tricks from the locals, and then those tricks become part of our base kit moving forward? Not everything needs to be a full-blown system.

I do think these themed ways we pick up things each expansion is kind of neat. But it could just as easily be a new tier of talents or abilities, that are just X expansion their. At some point adding these whole new systems will make things excessively complicated and cumbersome, so there has to be some sort of balance that lets new things neatly fold into our toolkit when the next expansion starts.

Of course, I’m also really fond of old school talent trees, and the way they let us customize our playstyle, so new tiers of talents would make me pretty happy; YMMV.

Q4tQ (as I desperately try to find groups for M+)

Do you think it would break the wheel if they started setting up dungeons for six people? Tank/Heal/DPSx4? I think it would solve a lot of frustration for those of us with the need to go BRRRRR and RAWWWWR and BOOOOOOM

I think this would both cause and solve problems. Adding more DPS to dungeons would mean they’d all need to be rebalanced. More DPS = things die quicker = things need more health or new abilities to maintain the challenge. Sure, the difficulty of dungeons already scales up for M+ and raids scale for the number of people, but it’s still a big change that would need plenty of testing.

On the flip side, as you say, it might significantly decrease the time it takes for melee to queue up. One more player across all dungeon runs in the game is a lot of extra players. But I think it’s possible it might have the opposite effect as well — tanks and healers might be waiting a little longer while searching for that final DPS player. And maybe that’s not a bad thing, evening out the wait times for all roles.

This is something worth thinking about for the next expansion, but I feel like it’s too late to apply a fix like this to live content.

What’s a video game decision that you’ve truly regretted? Getting a character killed or accidentally letting one die, breaking someone’s heart, that sort of thing.

All I’m going to say is that getting a bad ending in Persona 4 Golden hit me so hard I couldn’t play the game for three days. >_<

This is what reloading from save files is for!! Wipe those bad memories from your brain, load from an earlier save, and fix everything so it never happened. All good!

Granted, this does not work for everything. Some characters are always going to die. Some hearts will always be broken. But save files can do a lot.

Q4tQ Are you picking up Resident Evil Village?

Nah. I just get freaked out by jump scares. Bioshock is about the most I can handle in that regard. (And it definitely freaks me out.)

That is all for today my friends. I hope you have had a good week and are heading into a nice relaxing weekend. Be sure to pet your dogs for me — they deserve it.