The Queue: Get swole 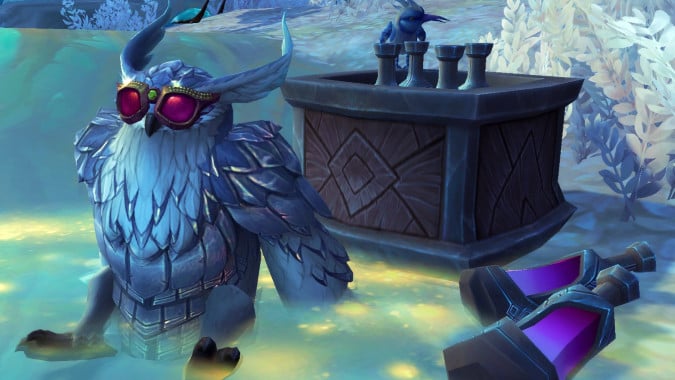 “Swole” may mean different things to different Stewards. I think I could maintain a Chaddius level of swole, though.

What class should added to WoW? What game mechanic should be removed from WoW?
And what’s up with Mitch’s hair?

I think an artificer or tinker type class would be great, a blend of magic and technology. They’d be spellcasters wearing heavier armor — mail, maybe, because we don’t have a lot of mail-wearing classes — that focus on buffing and debuffing with a technological flair. A class that stretches a little beyond the average fantasy trope to give us something a little different than anything we have in WoW today.

So there you have it, right from the source.

Q4tL: what fight are you happiest about leaving behind you in Nathria as a healer?

As a healer, it’s Sludgefist. There’s so much movement in that fight, particularly in heroic, that it feels like I hardly have enough time to stand still and heal (at least beyond casting Holy Shock every nine seconds). I feel completely useless in that fight because I spend two-thirds of my time dodging, and when I’m dodging I’m doing very little healing.

I have talked before about my dislike for the Denathrius fight, but even though it was long, complicated, and generally difficult, it never felt impossible. Healing on Denathrius never felt like the healing crew couldn’t handle things — it just felt like we needed practice and the entire raid needed to coordinate and get better at dodging avoidable damage. I never felt like I wasn’t contributing and I never felt like my guild wouldn’t be able to do it.

Sludgefist, though… never in past 16 years have I felt more useless and more disheartened in this game as when we worked on heroic Sludgefist. It took my guild far longer to kill Denathrius than it did to kill Sludgefist, but healing on Sludgefist is the worst I have ever felt while playing this game. I just felt like I was a lead weight on the rest of the guild every pull.  It was an awful feeling, a terrible feeling every pull.

I’m quite glad to never go back to that place.

Q4tQ Who is less deserving of redemption, Denathrius or Sylvanas?

Denathrius. I mean, sure, Sylvanas committed genocide and that’s really bad, but I had to listen to Denathrius demand that I crawl to him on my knees (and a number of other equally insulting and demeaning things) 260 times and I am so done with that guy. If I never see him again or hear his oily, smarmy voice it will be too soon.

Q4tQ: What do you think about the big legendary changes?

I think there are some missteps that are making the transition to 9.1 feel bad with regards to legendaries. The introduction of Shards of Domination, which are you’ll only be able to socket in certain gear slots, presents a big problem for anyone who’s already crafted a legendary. If your current legendary sits in a slot that can have a socket, you probably want to re-craft your legendary to put it in a different slot — which is expensive, time-consuming, and frustrating.

Then there’s the fact that some legendaries in 9.1 will have socket — right now you can add a socket to certain items by buying a Spatial Realignment Apparatus from Ve’nari. In patch 9.1, you won’t be able to buy this and instead legendaries that could get a socket in this way now simply have a socket. That’s a pretty great upgrade, but it also feels bad if you just crafted a legendary this week. (Which isn’t an unlikely scenario, as a lot of raiders right now are working on getting legenaries that don’t occupy Shard slots.)

Things like this won’t affect everyone, but they’ll feel bad if they do affect you. They seem (at least to me) like unintended side effects of trying to build something new and cool, like maybe Blizzard didn’t realize we would be so eager to jump on these new systems, or consider the consequences for doing so. But players always jump on what they see as new paths to power, so the fact that we’re talking about throwing our legendaries in the trash and starting over shouldn’t be surprising.

As to new legendary powers showing up, well, none of them particularly interest me, and it doesn’t seem like BiS legendaries are likely to change for most players. If I could equip a second legendary, the new Kyrian legendary might be interesting. But I can’t, and I already have my BiS legendary crafted at rank 4, so there’s no drive to pay attention to new legendaries, so it feels really unimapctful.

And for me, in particular…. well, I already have a BiS rank 4 legendary that’s crafted in a non-Shard slot. That means none of this will change anything for me, but I think at best it would have been an inconvenience. These legendary changes feel like a lot of work for very little impact and that’s gotta feel lousy both for players and for devs.

Because I don’t think devs are trying to make systems people don’t like. In fact, I’m positive they’re trying to make cool new ways for us to have fun. So when their changes don’t wind up working out the way they were meant, or have negative side consequences like this, it probably feels terrible to the developers. These are people who love the game and want to make it better for all of us, but sometimes things don’t work out.

If you had the power to change one thing in WoW, what would be the one thing that you’d want to change that has the least significance? E.g. Maybe it’s a particular sound effect that just makes you cringe, or the particular shade of gold on an otherwise awesome piece of armor that just doesn’t match properly with anything else. Something that really isn’t going to affect gameplay at all, but would increase your satisfaction beyond what someone would reasonably assume.

This was discussed in the comments, but I want a way to make all of the different shades of gold on my armor to match. There are a dozen shades of gold on armor — at least a dozen. There’s the bright yellow gold on Blood Elf armor. There’s the white-ish gold favored by the Army of the Light. There are tarnished golds and bronzy golds and brassy golds. You nearly never find colors that match outside of sets. There are dozens of different blues, greens, reds, and purples. And even if you match a primary shade, the accents — such as those ever-trying shades of gold — almost never match.

It is unimportant, but also a source of endless frustration. I will sometimes spend hours searching through my armor collection to find pieces that match, and searching Wowhead for pieces that go together. Sometimes I’ll spend hours on transmog sets that I never even use because I can’t get the perfect match. Hours and hours and hours go into this effort.

And even though you can find plenty of close enough matches — close enough that no one is ever going to notice — I know it doesn’t match and I can’t do it.

How would you feel about an expansion that had no new systems and no big raids (maybe just a big boss or two) but instead had a whole bunch of new zones to explore and quest in? What if Blizzard took all that time used for systems and raids and poured it into 10 zones with local stories, mobs, and quests that you could explore at will?

I’ve said for a while that I’d enjoy an expansion where we didn’t have another world-ending catastrophe to avert, but instead focused on fixing the damage left in the wake of those many catastrophes. Go back to Azeroth and start repairing things we’ve broken.

What you’re describing might fit into an expansion like this, perhaps adding new sub-zones to existing spaces that allowed us to go deeper into the stories of Azeroth.

But for all my complaints, I do think I would miss raiding. I enjoy grouping up with 20 people and accomplishing things together. I enjoy hanging out with my guildmates, and even when we’re having a rough night, I enjoy chatting with them. (Okay. Maybe except for Sludgefist when I was too busy feeling completely miserable to enjoy anything.) I’m not sure how you would replace that in an expansion like this.

Q4tQ: Why does nobody love hyenas as much as I do?

I have no idea what or why this is being debated, but I’m staying out of it for my own sanity.

Q4TLiz: Can you write a 100 word ode to Swolekin and how they will lead us to Shadowlands victory?

The Stewards are helpers. They’re here to help. They’re here to solve problems that are too complicated (or maybe just too tedious) for the rest of us. Maybe they’re working right now, quietly, behind the scenes, on a solution to all of the Shadowlands’ problems.

Okay. Except Chaddius. He’s chilling and enjoying the afternoon sun by the lakeside with a few bottles of wine.

Which I suppose is one way to solve our problems. Maybe we should be more like Chaddius. Skip getting swole. Forget our problems. Sit in the afternoon sun. Enjoy life.

And that, my friends, is all for now. I hope you have a lovely weekend, just like Chaddius is having.