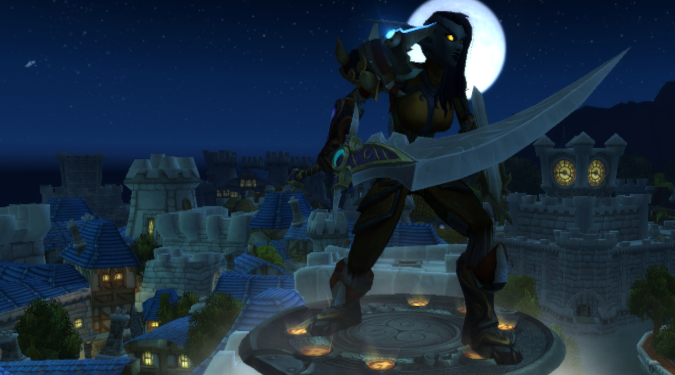 Look, I’m totally down with you feeling however you feel about World of Warcraft‘s story. But for the love of all that’s holy, don’t make death threats. Seriously, if this site didn’t strive for PG-13 style clean language I would be barfing expletives all over this Queue. The negativity in the WoW discourse has gotten way out of hand.

I straight up do not understand how I ended up even having to type a sentence like Don’t threaten to kill people because you don’t like the story of a video game but here we are.

Q4tQ: is the Jailor stronger than Family?

Well, I liked the cinematic. The only downside for me was it was a bit predictable. I’m interested in seeing where it goes from here.

Avoiding spoilers as hard as I can, but I feel safe in saying I called something like this back in Battle for Azeroth. Not exactly the same, but a similar fate.

As many people, including my podcast buddy Lodur, have pointed out this is the first patch of an expansion, roughly the point where we were at when we killed Gul’dan in Nighthold or cleared Dazar’alor in BFA. There’s significantly more expansion to go.

Well, I don’t agree with your assessment of the story so far, but I will say this — if you legitimately think you could do a better job than the narrative team on WoW during a global pandemic where they were attempting to keep the elaborate multi-year narrative arc progressing towards its final denouement and balancing this many plot threads, at this early stage of the expansion’s story, then you should apply. They’re hiring narrative designers. It’s always worth trying if you really, honestly think I could do better, to go and do exactly that.

Speaking as someone who has been waiting to see what happens since the opening of BFA and has made no bones about how serious I take the narrative, especially the burning of Teldrassil, I feel like I can say unequivocally that I’m interested to see what happens next. The potential Drust connection just has me more interested.

If the next time we get a patch we see a certain character is now giving us quests, I’ll probably be pretty incensed. Right now I simply think it’s too early to be declaring you know where this is going. I acknowledge that it could happen in a certain way and if it did I wouldn’t be particularly excited, but right now I’m really interested in watching how all of this comes together in 9.2 and 9.3.

And to be absolutely clear, I am completely serious when I say you should apply for a job there. That’s not sarcasm. I only got the original WoW Insider job by saying I could write a better column than that and applying.

Q4tQ: With the introduction of planes of existence, what would you think about playing a class that belonged one of them instead of a faction?

I’m not really sure what you mean. One could argue that Death Knights are powered, ultimately, by the Maw. That’s where the Lich King got his power from, after all. So we have a class that belongs to another plane of existence already. Similarly, Druids draw much of their ability from the Emerald Dream, so they would be a good candidate for a second class you could say belongs to another plane of existence.

If you mean trying to backdoor a third faction into WoW, I don’t expect that to happen.

Q4tQ: What would you think of a mid expansion class/spec introduction? Maybe a magic wielding Elune Nigh Warrior class or a Sylvanas magic wielding banshee class?

IMO Blizzard brings back a lot of players at the beginning of every expansion. But if they released a new class or spec at the middle it could give them a huge spike in the middle as well.

I don’t want a Sylvanas based class for personal reasons, in that I don’t think Sylvanas should become someone who has an entire class based around her.

I’d be down for Night Warriors although I still think that would be best served by making Night Elf Paladins who draw upon the Night Warrior power and call themselves Night Warriors, similar to the Blood Elven Blood Knights or the Tauren Sunwalkers. If you want to avoid having the word ‘Warrior’ in the name, call them Champions of the Night or Elune’s Chosen.

And I’d be down with a new class or new class combination in mid-patch.

If you’re unhappy with the story, I get it. I’ve been unhappy with it a few times in my life and I expect I will be again. You’re perfectly within your rights to feel however you do about it. An honest critique or even just saying ‘that’s it, I’m out’ — all good. An expletive filled rant? Borderline, but up to you.

But wishing death on or making actual death threats to people who make the game? No. That’s completely unwarranted and well, well beyond the pale. Love it, hate it, whatever you like. But focus on the game, not the people who make it.

I’m honestly sickened and saddened right now. I believe none of the folks who are part of our community here would ever do something like this, and I hope desperately I’m never proved wrong.

Blizzard Watch is made possible by people like you.
Please consider supporting our Patreon!
Filed Under: Moon
Advertisement