How to make the most of the very random The Duelist Burndown! Tavern Brawl in Hearthstone 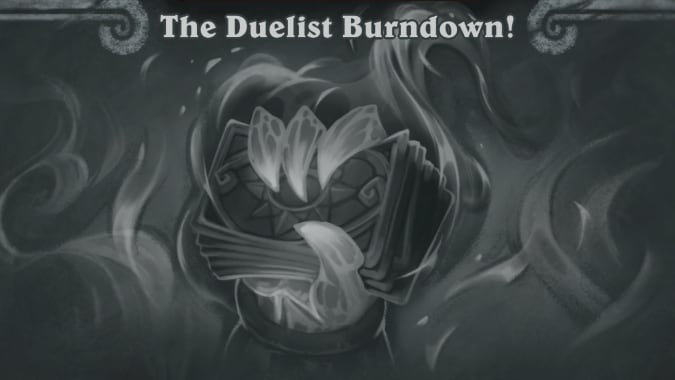 I hope you like RNG, because this week’s Hearthstone Tavern Brawl is as random as it gets. We’ve seen several Burndown Brawls in the past, where players are assigned random decks and pitted against each other. When a player wins, their random deck continues onward in the RNG melee, and when they lose, it’s knocked out. This means as the week progresses we’ll find an increasingly small pool of powerful decks in play.

The good news is there’s zero barrier to entry for this Tavern Brawl: just click Brawl and you’re headed right into a match. The bad news is that each match hands you a highly random deck — and not all of them are good (or fun).

Let’s take a look at how to win The Duelist Burndown! Tavern Brawl.

This Brawl adds mechanics from Duels to the Burndown Brawl style. While Burndown Brawls typically give you a random deck, this gives you a random deck, a random Duel hero power, and random Duel treasures. When you click that “Brawl” button, you don’t know what you’ll get — you could be playing any hero with any hero power with any deck. The fact that it’s a Wild Brawl means the pool of cards you could draw from is massive.

Burndown means that all of these random decks are locked in a fight to the death. When a deck gets a win, it stays in. When a deck gets a loss, it’s out. For players, that means that when you win, your next game will be with the same deck. But if you lose, your next game will be with your opponent’s deck. Winning combinations will come to the surface quickly, and eventually this random Brawl might be a lot less random as weaker decks are knocked out.

How to win The Duelist Burndown! Tavern Brawl

There’s no single strategy to help you win such a random encounter, but I do have a few tips that may help you get a win. The first and most important tip is this, which I will put in bold so you don’t miss it:

I’ve played a number of Brawls where my opponent clearly wasn’t sure how their hero power or treasures worked, and missed opportunities because of it. Before you play a single card, check out what you’re working with. I’ve run into a lot of decks that have zero-cost hero powers you can use twice a turn — in which case you want to be using that hero power as much as possible. Take a second to read up on your abilities so you know what you’re doing.

Beyond that, you just want to play a standard game. Mulligan for cards you can play on tempo, so you have something to put on the board every turn. Don’t hold on to cards in hope for killer combo, because it probably won’t be there. Try to keep your opponent’s board clear, and be willing make smart trades to keep potential threats off the board. I’ve seen a lot of buff spells in the mix, which means it’s best to take minions out before they can become massive threats. I haven’t seen many board clears or damaging spells so far, but the meta could swing at any time.

Most games are won or lost pretty quickly, and if you keep queuing up for games you’ll eventually get that win. If it doesn’t look like you’re going to win, concede. You’ll wind up with a stronger deck and a better chance next time.

Good luck and enjoy your pack this week!