The Queue: Transmog madness is no excuse for transmog rudeness 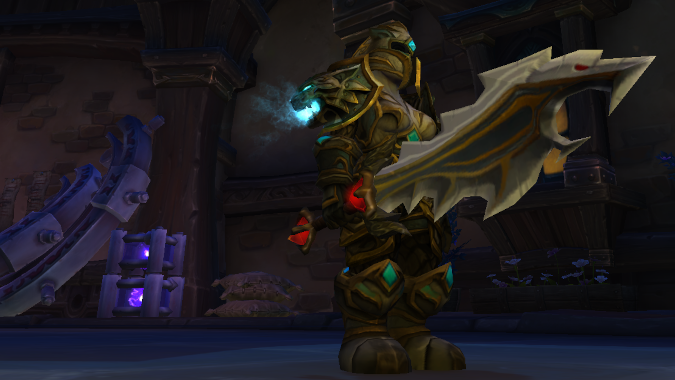 I really miss my little Dark Iron Dwarf Pally. I should level her up. What Covenant works with Pallies?

Poop. I still can’t mog Ret Cow’s shoulders to Sunsoul Pauldrons. I’ve been using them for xmog on her for ages. I can mog ’em to most anything else, just not the Sunsoul ones. :(

It’s not just the Pauldrons. I went on and tried to put every piece of Sunsoul on, and no dice — I could only manage to get one of the Sunsoul Pauldrons to work by splitting the two shoulders and only mogging one, and trying to mog to any other piece of the Sunsoul just didn’t work. It didn’t take my money, it didn’t go through at all. I don’t know what’s going on, but I reported it as a bug.

In the Undershadowlands, you encounter Jailsage Nola. After an eternity of getting turtles to the water, you are reincarnated in the mortal plane because, as we all know, the cycle of life can be cruel.

I admit it, I laughed.

9.1.5: we find out that Sylvanas’ biggest fear is being trapped alone in a room. Not that she can’t get out of it, but because she would have no one to be smugly condescending too while running away from and she gets anxiety when she’s out of her comfort zone.
Discuss.

Honestly, one of the things Patty Matson does exceedingly well when she voices Sylvanas is go from glib and sarcastic to smug and sardonic to genuinely concerned. Watch the Sylvanas/Tyrande cinematic again, the way all that condescension and arrogance falls away for one moment when Tyrande talks about killing Nathanos.

I’m extremely interested in seeing what Sylvanas is like with a complete soul. So if there’s a scene with her in patch 9.1.5, I’d definitely hope to see how Patty plays it.

It is the Queue. You are likely to be eaten by the Tarragrue.

Mini rant about stygia.
I hate stygia and hate is by far too light of a word to describe how pissed I am right now. Killing elites to reach my body and server goes “lol despawn everything then respawn everything.” so my corpse I’m meant to loot to get my 1.8k Stygia is GONE.

Don’t make me drop stygia if your not going to let me even loot my corpse. This isn’t the first time I’ve seen everything vanish then respawn. This patch is just buggy mess.

Mildly calmed down looking at the vendor at Korthia and the transmog set is now 6k, could of sworn it cost 10k stygia. So I can still afford the transmog set once I eventually hit renown 60 in the future. Worst currency ever.

edit: Might of overstated how annoyed I was but stygia just is so infuriating since 9.1

Any mechanic that involves me having to run back to my corpse to loot my own stuff or lose it is a mechanic I hate with the fury and intensity of a thousand suns.

Q4tQ: Have you ever bought a game and deliberately held off on playing it? I picked up a horror themed visual novel last month when it was on sale, and I’m trying to resist playing it until we get closer to Halloween.

I did this with Tyranny, I bought it on sale and then didn’t play it for like four months because I was playing Pillars of Eternity and then I played, I want to say Greedfall before I got around to it. I generally don’t do this, instead, I hold off on buying a game if I know I’m not going to play it unless it’s on sale for dirt cheap.

I know it’s a joke and I hate to sound like your dad, especially since I don’t know your dad and doubt I could do a convincing impression of him even if I did, but I have to say that I don’t like that ‘Master Race’ joke thing.

Just not really funny to me.

As for why they’re switching to Goblin, it feels more like they’re spending money to cheese one encounter and they will likely switch back as soon as they don’t need Rocket Jump anymore, which is fine I guess but feels kind of… I don’t know, weird? I get that these are people who are literally paid to kill raid bosses first, but it still takes away from the gameplay aspect in my eyes. But it’s not really any of my business.

Okay, that’s the Queue for today. Wish Mitch a belated happy birthday, leave lots of questions for Liz, and be kind to each other.

Blizzard Watch is made possible by people like you.
Please consider supporting our Patreon!
Filed Under: Weird Transmog Bugs
Advertisement