Questlines added plenty of combos to Hearthstone, but the game might not be prepared for them 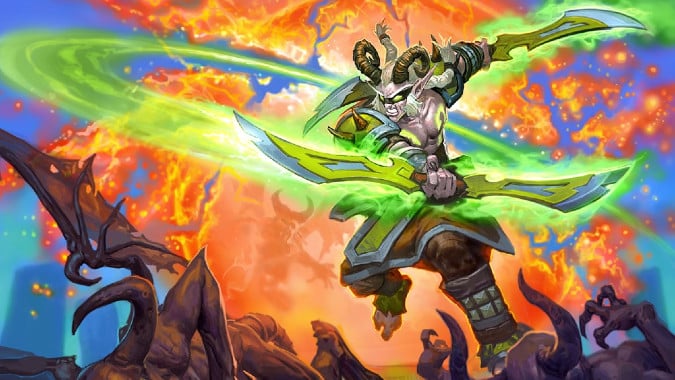 Despite how excited we were for them, Questlines are not playing well in the current Hearthstone environment. The three Questlines that are seeing the most play — Mage, Warlock, and Demon Hunter quests — have led to games with low interactivity, where one player works towards completing their Questline without ever engaging their opponent on the board. And when the Questline is completed, it often enables the ability to play some sort of combo that instantly kills their opponent from hand (that is, killing their opponent purely with cards played on that turn, without any prior setup).

Meanwhile, other Questlines that were designed to simply add more tools to the player’s game plan, but not to win the game for them by themselves — such as the Rogue, Paladin, Hunter, and Warrior quests — aren’t seeing much play at all. Players seem to be flocking only to those Questlines that truly have egregious power levels. 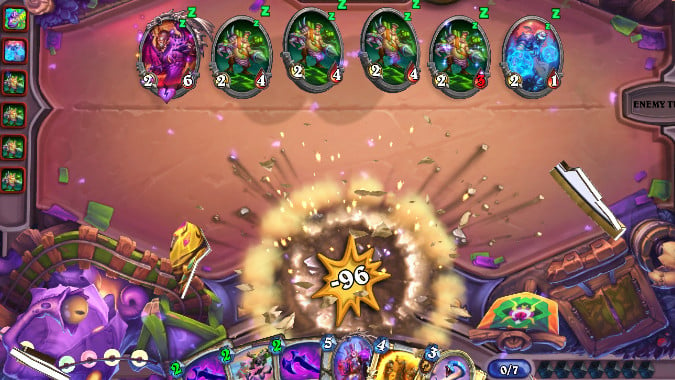 In September 2014, Blizzard released Hearthstone patch 1.2.0.6485, which introduced several balance changes to the game. Among those changes, one in particular was iconic: the nerf of Leeroy Jenkins, which saw its mana cost increased from 4 to 5, thus limiting its ability to enable OTK — one turn kill — combos.  Hearthstone developers had this to say about the change:

Originally Posted by Blizzard Entertainment (Blue Tracker)
Leeroy Jenkins created a strategy that revolved around trying to defeat your opponent in one turn without requiring any cards on the board. We like having a variety of deck types but taking 20+ damage in one turn is not very fun or interactive.

But the way players are winning games in Hearthstone today seems to go against that stated philosophy (assuming it hasn’t changed in all those years, of course). Whether Blizzard has changed its thinking or not, it’s easy to agree that losing the game in a single turn with no possibility to counter your opponent’s actions isn’t exactly fun.

Hearthstone, by design, limits players’ ability to counter their opponent’s game plan. These features aren’t as robust as in other card games, such as Magic: The Gathering or Legends of Runeterra, for a simple reason: there is no back and forth between players within a turn. When it’s your turn, only you can play cards. That simplicity is part of Hearthstone’s charm, and makes it far more approachable to a large number of players — but simplicity is not without its flaws.

Since a player can play a large number of cards in their own turn, any sort of counter play must either happen in anticipation of an action, or after it. In other words: when your opponent presents you with a problem, you must either anticipate that problem (and already have the correct answer in your hand or on the board) or act upon it afterwards. In either case, this must happen on your own turn. But OTK combos are meant to finish the game immediately. If a combo is played properly, the player wins the game and no follow-up is possible. This means that these combos can only be anticipated; never responded to.

And therein lies the problem: Hearthstone already has limited tools for players to anticipate combos. When those Questlines, which enable particularly powerful combos, can be completed quickly, players have few chances to even draw their counterplay cards, in order to have them in hand before their opponent finishes their game plan.

Pro players like Kranich have shown that it’s possible to deal lethal damage from hand as early as turn five, even in high Legend environments:

So, we now have a pretty good grasp of what the problem is. But what can be done to fix it? 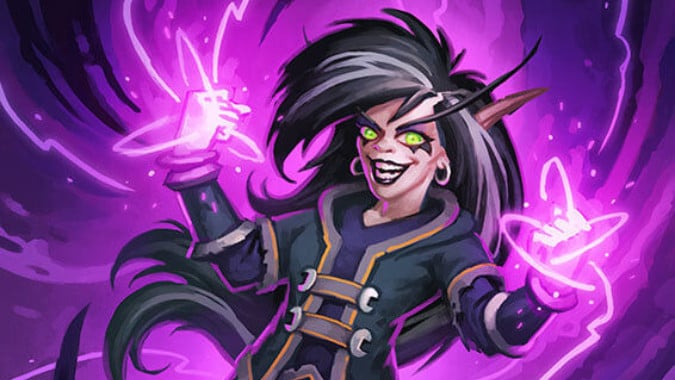 How Hearthstone could rein in Questlines

The intermediate steps of Questlines could require the player to perform actions that the opponent has a chance to interact with — but that they also have a chance to take steps to protect. For example:

These are all just ideas, but the general impression is that Questlines should not be so trivial to complete that the opposing player has little to no input on gameplay. Anything that gives opponents a chance to tamper with Questlines — at the cost of their own tempo and resources, of course — would be very much welcome.

We expect Blizzard to make adjustments to Questlines soon — perhaps as early as next week, according to Lead Designer Alec Dawson — so we may not be playing a quest-centric meta for much longer.