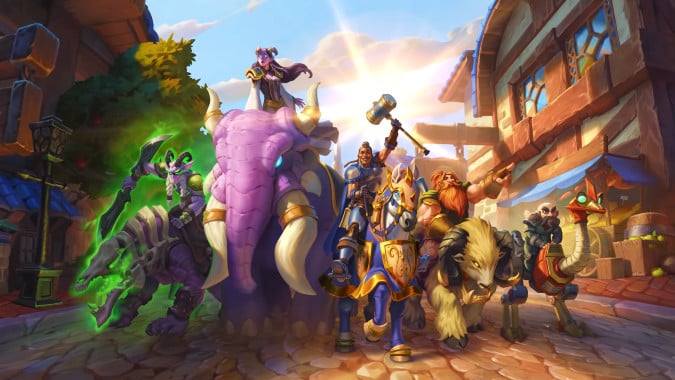 Hearthstone’s newest expansion, United in Stormwind, introduces a brand-new keyword: Tradeable. This keyword is unique, because it doesn’t add an active or passive effect to the card itself, like we’re used to seeing. Instead, it allows you to trade these cards for a different card, for the low cost of one mana!

Game designer Chadd Nervig, aka Celestalon, has already taken to Twitter to clarify how it works:

– Trading does not count as playing a card.
– You draw the top card of your deck (counts as a draw, like normal.)
– After drawing, the Tradeable card is shuffled into your deck (DOES keep enchantments, unlike normal.)

This could become a nice way to reinforce how tech cards work in Hearthstone. 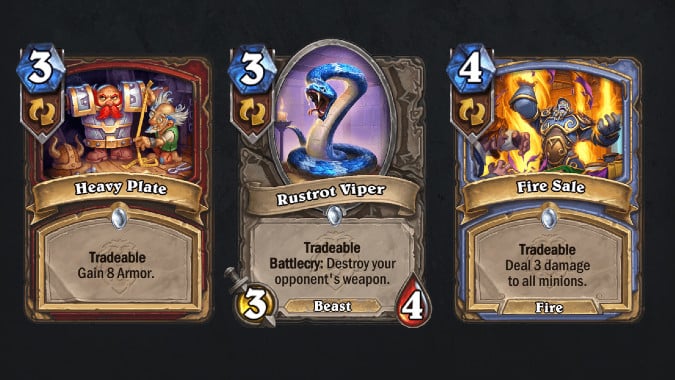 Using tech cards in a game with no side deck

Tech cards are cards that you only include in your deck to perform a specific function that is often completely unrelated to what your deck does: Instead, that card is meant to counteract something that your opponent will probably do. It’s usually an “anti-meta” tool. For example: if the meta is full of decks that play weapons, you might include an Acidic Swamp Ooze as a tech card, since that card has the ability to destroy enemy weapons.

Lots of other card games include the concept of “side decks.” These are extra cards that aren’t part of your regular deck, but that you can choose to swap into your deck depending on what your opponent is playing. Of course, a concept like that makes it much easier for a player to decide to use tech cards: they can safely add a “weapon-destroying” card there, and only decide to use it if they suspect their opponent will, in fact, be using weapons.

How Tradeable cards could improve things in Hearthstone

In Hearthstone, since there’s no side deck, the decision to include a tech card has always been a far more complicated one. You can’t choose to swap that tech card in or out of your deck; it’ll always be a potential draw, whether it’ll end up being useful to you in your current game or not. Because of that, those cards lose a lot of power — which, in turn, makes it so that players are less likely to decide to counter their opponents’ game plans.

Cards with the Tradeable keyword will potentially facilitate this process — in fact, one of those that have been revealed so far, Rustrot Viper, is designed to do exactly that. Much like the Ooze, its Battlecry effect destroys your opponent’s weapon. However, if you draw the Viper at a moment when it won’t be useful to you, you can simply trade it back into your deck, and draw something else.

This is a huge step forward in terms of allowing players to strategize, and include more tech options in their decks that allow for more counter-play against specific enemy decks — which is a great thing for a healthier meta overall. Players should be allowed to counteract powerful decks, ensuring that they don’t end up being too oppressive. A common problem in Hearthstone has always been that certain powerful cards can be played “with impunity.” An environment with more tech options to oppose those powerful cards, allowing more players to be able to fight back — and perhaps outwit their adversary — is a great thing for the game.

Tradeable cards joined the game with the launch of the United in Stormwind expansion August 3, so you should see their impact the next time you start a match.

Blizzard Watch is made possible by people like you.
Please consider supporting our Patreon!
Filed Under: Tradeable, Tradeable Keyword, United In Stormwind
Advertisement