The ???: I don’t even know what’s happening here 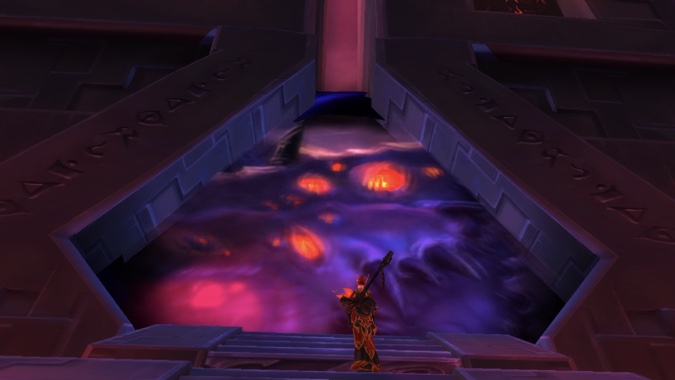 I really don’t have a clue as to what’s going on anymore. Have I lost all control of this situation? I think I have. I think perhaps that I have.

Q4TLiz: How are you enjoying Sanctum of Domination progression and how do you feel the domination gems system has actually played out?

I’ve been enjoying Sanctum of Domination a lot. The fights are varied and interesting. My guild is currently working on Heroic Ner’zhul, and I have to say there is a peculiar sort of joy in how Ner’zhul constantly throws you around. Raiders go flying left and right, constantly, sometimes off the edge of the platform to their deaths. You die just as much as you do in any other fight, but somehow soaring off the edge of that platform is always funny, no matter what.

But the gearing system can be awkward. For those of you who don’t know, there are nine domination gems which can be socketed into five pieces of gear which are (almost) all raid drops. There are three types of gem, and socketing three of one type into the right type of gear gives you a set bonus that’s only active in the raid, Torghast, and the Maw.

And those set bonuses are really good. Even if players have higher ilevel pieces from PVP or Mythic+, they’ll want to have a piece of gear with these gems in raid. They’re a significant power boost for raiders, and making them reliant on multiple layers of randomness can be frustrating for raiders who don’t get the particular drop they need. Now, I had the best possible luck with this, collecting gems and the armor pieces to put them in very quickly. But I know some people who have had terrible luck.

Over time, this evens out. Randomness normalizes over time as everyone gets everything they need. Two months on and players who have been playing almost certainly have all of the pieces they need. But early on it didn’t feel good for anyone except those who were lucky with RNG. And anyone who’s just starting the raid will have weeks and weeks of work to get their gems and gear and bonuses.

It’s an interesting system, but being unlucky just isn’t fun. And a purely RNG system means that someone will always be unlucky.

Inspired by the updated paintings, I would pay money to see the Den of Mortal Delights in the Black Temple transformed into the Garden of Fruitful Delights, along with changing all the concubines into fruit vendors. (Posted in the correct Queue this time.)

Q4tQ: At what point will the “how they joined” aspect of allied races no longer be important, allowing Blizzard to just have them as a default race unlocked from the start? It took 3 expansions before the requirements preventing new players from rolling a Death Knight were dropped, so I’m wondering if we should expect something similar with allied races.

As you say, Blizzard tends to gradually relax requirements for different types of content. But I don’t think they’ll ever completely let Allied Race requirements go — though they may well wind up loosening them even further and get rid of all of the time-consuming, grinds parts of unlocking these races.

But I think the little quest chains to finish unlocking each are going to stick around. They’re short enough to not be a huge burden (you have to know they’re there, but not much more) and they offer unique stories about the new race, and its relationship to the faction.

And I mean, come on, how could you remove T’paartos from the game? You can’t, you just can’t. So some of the Allied Race requirements have to stick around.

A pet peeve of mine is ppl will talk about how excited or loving they are for something but not say what its about. Ive heard wheel of time mentioned for a Looong time but any discussion has bee vets talking about it (thus making it incomprehensible). Its rarely “omg new epamsidoes of X franchise, its the soinoff of y but focuses on a new group with story elements focused in Q and Z for R reasons so thry are able to do stuff they couldnt in the main series”

I simultaneously love and hate Wheel of Time and am currently in the middle of a reread, so if you really want to hear about it, here goes.

The series is, at its heart, a super generic fantasy. There is a generic bad guy, the “Dark One,” who is super evil and wants to destroy everything for no particular reason except that he’s evil and wants to do evil. He was locked away forever and the world is absolutely safe now, or so most of the world believes… except he is breaking free and influencing the world and a chosen one has to stop him. People in the world draw magic from the True Source, which is apparently split with a line down the middle so there’s half that only men can access and half only women can access, and the male half has been tainted in a way that makes all men who use it go mad. After the source was tainted, these men broke the world in a fairly literal way — mountains were toppled, oceans vanished, cities were entirely lost.

Our chosen one is just such a man, the reincarnation of a great hero of old… who went mad and killed everyone he loved, earned himself the title “Kinslayer” before he went completely mad and destroyed the world. So not everyone is really happy to see him. Lots of people think that he needs to be killed. Lots of people think he needs to be protected to fight in the prophecized  last battle.

The story has an epic scope, with a tremendous cast of characters who play out the story over a background of warring nations and differing societies. There’s a decent gender balance of the core characters, and everyone is powerful and capable in their own way. There’s a lot going on, and you’re likely to enjoy at least some of it.

Of course, the problem is that you’re very likely to not enjoy all of it. There will be main characters that you simply don’t like, and the books do not focus on just one character, but jump from one story thread to the next. So you have an awful lot of reading to do, and some of it you are probably not going to be into.

There’s a lot I enjoy in the series. I think Robert Jordan is weaving some very good tales, and I recognize there’s a skill in telling a story on this massive scope while keeping it coherent. But there are also things I don’t like. And I have to go through all of that stuff to get to the stuff I like.

I petition to make it mandatory that within the bounds of the Queue, we refer to Halloween as “Mitchmas” because if Mitch had his own Xmas it would be Halloween, or “Mitchmas”.

Halloween is for all of us.

And I am going to leave my confusion behind and call it a day. I hope you have a good Friday and a good weekend to follow. Take care of yourself, your loved ones, and your pets. We’re here today, so enjoy what’s in front of you. I’ll see you right back here next week.