The Queue: Billie Eilish’s mom has got it going on 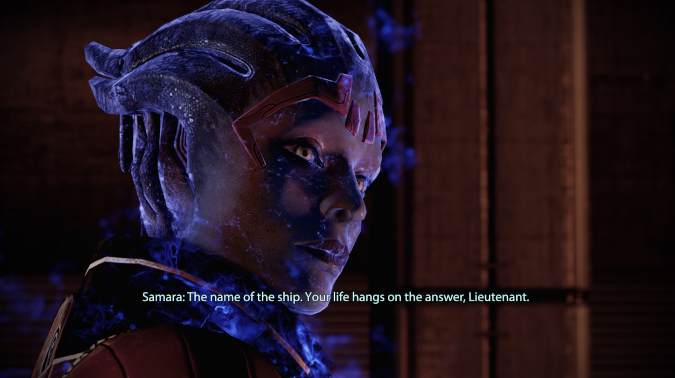 Maggie Baird is a writer, an actress, and a songwriter and singer. So it’s a bit reductive of me to call her ‘Billie Eilish’s mom’ like that, but the song lyric demanded it. So, to be clear, she’s written and performed a movie soundtrack, won multiple awards, and has an impressive IMDB page. She also does a great job providing the voice for Samara, who is objectively both welcoming and terrifying.

Samara is one of my favorite squadmates in ME2, especially on this Vanguard playthrough because we can combo biotic almost anything to death, and she’s actually just a really cool person, if somewhat tragic. I’m still amazed anyone ever picks Morinth over her, but I guess some people really just want to be killed by a vampire Asari.

Because evolutionarily speaking, if it worked the other way our ancestors would all be dead before they had offspring and we wouldn’t exist.

We often forget that our brains are not computers, they are big lumps of specially evolved cells that take in our sensory information and use it to determine the world around them. They evolved in tandem with those senses, and are not doing the same things a computer does to process information — there are complex chemical processes involved in our cognition, and our sense of time’s passage is part of that process. As explained in the article, when you are engaged or enjoying something your brain smoothly processes time because things are happening that it expects, but when you’re unhappy or bored, your brain begins to fixate on individual moments hoping one will end the chain of events your braid isn’t wanting to experience.

We don’t know exactly why that is, but it is likely related to the similar phenomenon of time seeming to pass more quickly as you age — your brain is processing more per second and as a result we miss details and things seem to be going faster. In essence, when stuff is boring, we begin going into hyper-analysis mode, slowing down our processing speed to comb the experience for details we can use to make it not be boring anymore.

I mean, it’s not a question, but it made me smile. Maybe y’all can get a PS5 now.

Do you think the development teams ever get disheartened by guide writers and class specialists when they write the Best X for Y Class articles? I mean, the developers try and give everyone interesting choices for playstyles, and it always seems to break down to, if you’re not playing X way, you’re not optimal/playing the class correctly, so why did the devs bother creating all the other options?

The majority of players do not consult guides.

It’s often hard for us to realize this, but the very fact that you’re willing to look up information and implement it in your gameplay means you’re already a lot more invested in your game than most people. The majority of players of WoW, for example, do not go to Wowhead or come here or do much of any reading about the game — they log on, play for a while, and leave. It simply is a pastime for them, and they’re not concerned with how optimal the gameplay choices they make are.

The game has to be designed for them as well as for us, the heavily invested, heavily vocal minority. There are a lot of players out there who will never see those guides, or who will only see them when they finally get frustrated enough to hit up a search engine and try and find out how to do something. Then they’ll go right back to not even thinking about it again until something stumps them.

I’m sure there are developers who care about the idea of guide writers flattening all nuance down to “pick X” but it’s just one of many concerns in creating a game.

So, weird question. I read an article about deli sandwiches that inferred that steamed hoagies were a very specific Southeast regional thing. So, if you go buy a hoagie or a sub or whatever in your neck of the woods, do you have a steamed option?

I grew up in Rhode Island. We don’t eat Hoagies, we eat Grinders, and we definitely don’t steam the things, wtf even is that, what are you some kinda prince needs his food special, just eat it already.

Sorry, apparently my upbringing is still in there.

Okay, that’s the Queue for today. Have fun, be kind, and see you when I see you.

Blizzard Watch is made possible by people like you.
Please consider supporting our Patreon!
Filed Under: Ouch
Advertisement