How to (not) get the X-45 Heartbreaker during Love is in the Air, now live

The Big Love Rocket doesn’t exist anymore — it’s been renamed to X-45 Heartbreaker, and this is the first year that we’ll be (vainly) trying for the rocket under its new name. Nonetheless, nothing else has changed: the X-45 Heartbreaker doesn’t exist, either. The elusive, pink, suggestively-shaped vehicle is just a figment of our collective imaginations.

The estimated drop rate for this mount is 0.03%. In other words: Each time you defeat the Apothecaries, your chances of getting this mount are the same as the chances of being struck by lightning once in your lifetime.

This year’s event started today, and you can queue for it from your regular Looking for Group pane — they will show up as The Crown Chemical Co., and upon getting a group, you will be teleported to the courtyard of Shadowfang Keep, where the fight takes place.

You will be facing three Apothecaries: Hummel, Baxter, and Frye, in what is usually a very easy fight. The battle only has a few real mechanics — toxic Perfume or Cologne is hurled at you and your friends, either as pools on the ground, or as a spray. (You can choose to use a neutralizer to become immune to one of them, but no one ever bothers to do that.)

In addition, the third of the apothecaries, Frye, cannot be tanked. He is a free spirit, and will just wander around attacking whoever he pleases. 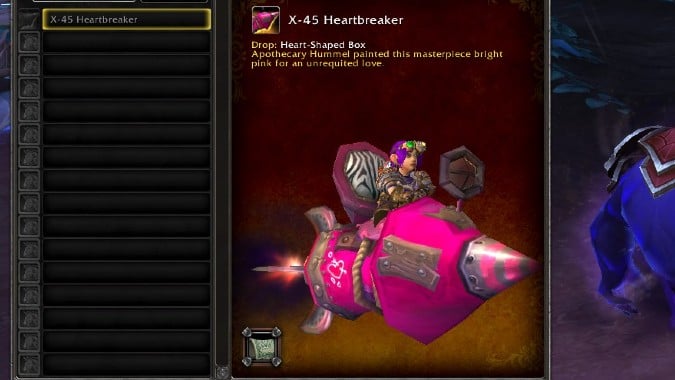 Your alts will be an army of never-ending disappointment

Because the fight is so easy, it also serves as a great opportunity for you to get over your stage fright from healing or tanking. If you’re not very comfortable performing those roles for total strangers, this is your chance to do so in a real encounter — one that is very forgiving.

But besides simply being an opportunity to flex your tanking or healing muscles, each new alt you take through the fight on each day gives you another chance of getting the Heartbreaker (or, more likely, another bout of inevitable disappointment). Altoholics, rejoice: Holiday events with bosses are your time to shine!

Even if you don’t get the X-45 Heartbreaker from the apothecaries (spoiler alert: you won’t), these bosses also drop necklaces, which could be a potential upgrade for an under-geared or neglected alt — especially in case you’re not using heirlooms.

Finally, a note of warning: Even though low level characters are also allowed to queue for the fight against the Crown Chemical Co., they aren’t all eligible for a chance at the rocket! Only characters level 50 and above can get the version of the Heart-Shaped Box item that might contain the mount, so high level alts only.