The Queue: I really did not see this coming 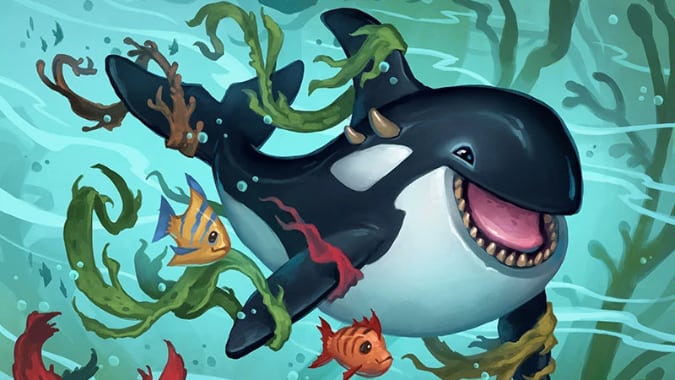 I’ve been writing on the internet for a long time now, but Orca obsession is a content curveball you just don’t see coming.

QFTQ: how do you feel about orcas and why are they the best species in the universe

oh and follow up question would you ever consider changing the website name to orcawatch, tyvm for your time

But if we’re ever in the market for a new name, I now know just who to ask.

QftQ: Not long ago one of you mentioned how they enjoyed survival hunter quite a bit. Is it really in a good place finally? And people got used to the idea of a melee hunter? I remember back even in BFA when groups invited a hunter and they automatically expected it to be a ranged and kicked them if they wouldn’t want to change.

Survival is seeing a resurgence lately, though I don’t know that it’s really “accepted” yet. And with raids full of annoyances targeted particularly at melee players… why would a good ranged class choose to be melee?

When you see World First guilds class stacking like that, you know you’ve got a powerhouse of a class. This isn’t some shabby second-rate spec anymore: Survival Hunters are in the game, and this tier’s set bonuses gave them enough of a boost to see a quarter of some Mythic raiding groups made up of Survival Hunters.

And this isn’t just from looking at a few raid groups. Icy Veins rates Survival Hunters as S-tier DPS for Mythic+, coming in second place just below Demon Hunters. Wowhead has similar data.

But has the community fully embraced the spec? That I’m not sure of. “Melee Hunter” has been a punchline for a decade or more now, and it may take more than one good tier to genuinely start to overcome it. However, if anyone gives you flak for playing Survival, you can point them to the facts. At least in PVE, Survival is outperforming almost every other melee spec right now… at least in the hands of skilled players. If it keeps up this way, maybe Survival will eventually break free of the stigma.

Fun Q4tQ: Are there any zones or instances that are deeply associated with real seasons for you? The Spires of Arak will always remind me of a blazing hot August night, when I had insomnia and spent something like midnight to 3:00 AM questing for the first time in that zone (not sure how I missed it before, but I had). And the Zangarmarsh dungeons – especially the Steamvault – are late June, when I had some vacation time and spent a good part of the week getting exalted with the Cenarion Circle on my druid.

Karazhan always feels like it’s it’s the middle of the night, and I’m sitting up playing games instead of, you know, getting a good night’s sleep. I have lots of great memories of going through Karazhan with friends when it was current content, And in late Burning Crusade or early Wrath, a small group of friends and I went to try to tear down the raid on our own.

There were three of us, and we were all Paladins, which gave us one tank, one healer, and one DPS. We didn’t do a ton of damage, but we had real staying power and even bosses had trouble taking out a Paladin tank.

And we made a lot of progress! In the end we got as far as the Chess event, which really needed numbers to compete at the time. (It’s easy to solo it Chess now, but at the time it really felt balanced around a full party.) We started late in the evening, and with every passing hour we thought “We’re making progress! Let’s just do one more boss!” and kept going. It was around 4am when we got to the Chess event and finally decided to call it after just a few attempts.

The power of memory, the power of nostalgia is strong. Whenever I go to Karazhan now, I inevitably think of that late-night raid, so many years ago.

Q4tQ:
How will WoW overcome the faction language barrier while we are cross-factioned grouped? Will we be able to speak to the other faction outside grouping? What lore explanation can there be for why we can communicate in group by not outside it?
I haven’t seen any discussion about the language barrier, and it only occurred to me tonight.

Easy: there just won’t be a faction language barrier. Done! When you chat in a cross-faction party or raid, your text will be clear to everyone in the group. It’s really the only elegant solution here.

Had a dream that I found a bunch of candy and snacks stashed in an old cooler that I had forgotten about.

Woke up and checked the same place, and to my surprise the cooler was actually there – but it was empty :(

In my dream there was also a forgotten pack of chicken filets in the cooler – I’m not too bummed out that that part wasn’t true either.

Perhaps it isn’t a memory of the past but a prognostication of the future, when you (or someone else) will leave candy there. But now you know to skip the chicken. Dreams can be so useful sometimes! Now you have a candy stash!

And that’s all for now my friends. I hope you’re all having a good day and continue on to a good long weekend. Take care of yourselves, folks, because it can be rough out there. I’ll see you back here next week!