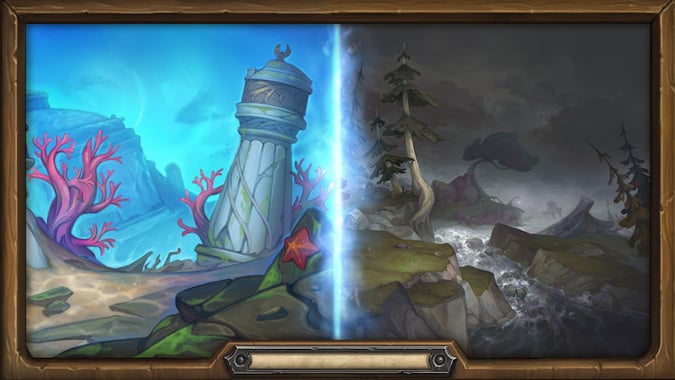 When Mercenaries launched as a new mode for Hearthstone, there were a lot of factors about it that seemed like it might be better, or at least more sustainable, than the main Hearthstone game. With just six cards in a party instead of a deck of 30, there wouldn’t be a need to assemble as big of a collection to get started. There would be multiple ways to collect cards and coins — buying packs with money or gold, in-game bounties, and tasks from the campfire. Players could earn everything without having to spend real money. There was even a way to target specific coins to improve the Mercenaries you were using. From completing the bounties that rewarded those coins, to playing Mercenaries who would then earn their coins when completing a bounty, to picking up Mercenary tasks from a mystery space, players would be able to aim for which coins they are earning, improving the Mercenaries they favored faster.

So then, why is it so hard to earn coins for some Mercenaries, and so easy for others? And what could be done to improve the system? 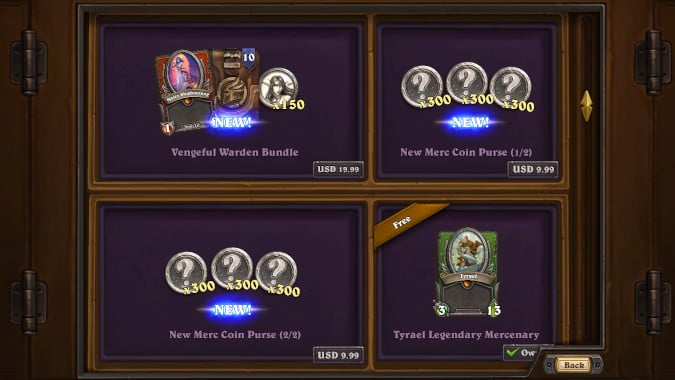 At first when buying packs, it’s nice to open it up and see cards. You’ll want to build a roster. With some of your favorite Mercenaries, the extra portraits might be nice, too. However, the more you play, the more the coins –used to improve a specific Mercenary’s stats and abilities — are welcomed.

However, the more Mercenaries there are, the less likely the coins for that one you want are going to show up in random packs. And the longer Mercenaries is out — and the more Mercenaries are added — this problem just gets worse. The recent patch added 18 more Mercs to the game, meaning 18 more characters vying for one of the five slots in every pack. But if you want to ensure you have coins for the latest Mercenaries, not to worry — one of the packs you can buy in the store features 900 coins for just the new Mercs, for $9.99 USD. Cash only. And while Blizzard keeps rolling out new Mercenaries, they can keep selling these packs, and will also sell certain packages for certain other Legendary Mercs.

Another problem with trying to target Mercenaries’ coins is that almost everything is a roll of the dice — and that dice can be weighted by rarity. For example, to try and put together a nice fire-based trio, I needed to snap up Baron Geddon, with enough coins to get Inferno at Rank five and Mark of Conflagration up to Rank four. To farm his coins, I had to complete Winterspring Stage 2 — Yeti Hunter Ranel over and over. Between that stage rewarding his coins, and the bounty rewarding coins for someone on my team, I should be rewarded Baron coins consistently, right? But Yeti Hunter Ranel also rewards coins for Garrosh Hellscream and Scabbs Cutterbutter — almost always Scabbs! And when the reward features coins for a team member, how often was I lucky enough to pull the one I wanted to build up?

And then what happens when a Mercenary is maxed out? Their stats go up, but they can still earn coins from their bounties, from their tasks, and from coin packs. They become better to play with, with all of their attack, health, abilities, and equipment as high as they can go — but they’re also a burden to play with in terms of rewards. While you play them, their coins still take up a precious slot for completing a bounty. I maxed our Cariel Roame early on, but if I need to knock out a bounty quickly for a task, or to help level a new level 1 Merc, most of the stages in the Barrens would still reward coins for her. 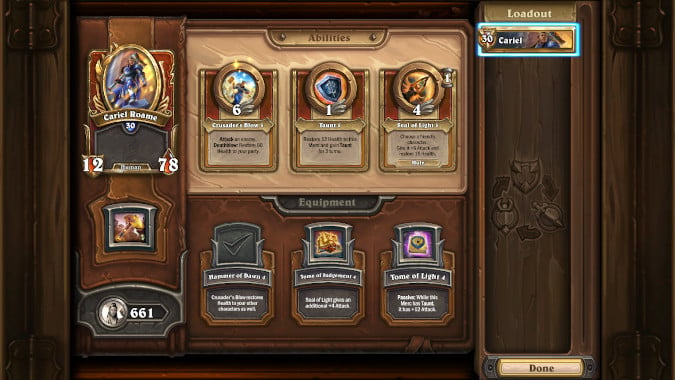 What could be done to improve the coin acquisition in Mercenaries?

First, specific bounties shouldn’t reward specific coins. Take out of the grind of having to run the same one over and over to earn coins for a particular Merc. Instead, coins should be rewarded based solely on the group running it. Have six Mercenaries, earn three to six sets of coins, depending on difficulty of the bounty. The newer the location, the more coins it rewards, to encourage doing new content. Then the heroic version has a multiplier — two or three times as many, maybe. That rewards the player for playing a group, and they become stronger for it.

But what if the whole group is maxed out? Be able to spend coins on other coins — probably not a one-to-one exchange, and maybe rarity should play a factor. If the merc is rare, two coins for another rare Merc’s coin, four for an epic Merc’s coin, and sixteen for a legendary Merc’s coin. This way, seeing coins for Scabb’s Cutterbutter is still a little disappointing, but they’re just one-sixteenth of Maiev Shadowsong.

If there won’t be any use for extra coins down the line, then duplicates need to be removed. They were smart to make sure cards couldn’t be duplicated, and adding this coin system instead of introducing duplicates — but at least with the main Hearthstone game, duplicate cards can be turned into dust, and then they can help craft the needed cards. But with coins not being able to be used on anything but one, specific Mercenary, and with a Mercenary having a finite endpoint when coins are suddenly worthless, when that’s reached, coins for that Mercenary need to stop accumulating, from all sources.

However, there are some fun points to Mercenaries, especially when certain Mercs can only be unlocked through certain tasks, as with Leeroy Jenkins, or Chi-Ji. This may not be everyone’s favorite roguelike progression, but they do keep coming out with new, varied content. With 18 new Mercenaries to collect, we just wish it would feel less bad to have them added to the game.