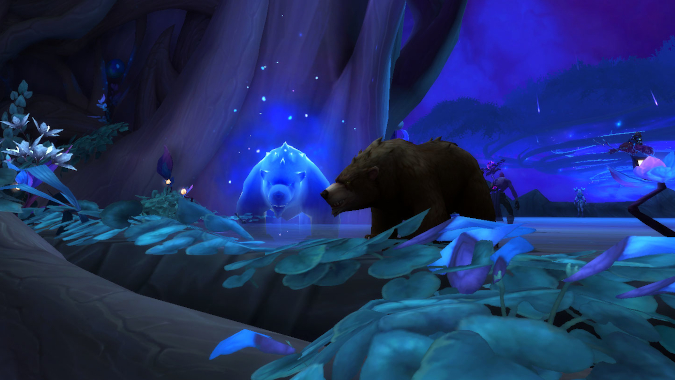 This is The Queue, where you ask us questions and we’ll give you some answers.

So anyway, I sez to Mabel…

LIZ, IN OUR FABULOUS DISCORD

Q4tQ: I want to know what every Queue writers’ favorite Star Trek character is. Please explain your choice.

I’ve always had a soft spot for Deanna Troi. Problem solving via empathy, and having empathy labeled as a superpower-type ability, was incredibly novel to me as a kid. In a lot of ways, it’s still a very unique thing to have portrayed positively in media. She seems to be posed in direct contrast to several of the initial concepts associated with Trek, specifically the Vulcans and Spock — pure calculated logic, as opposed to emotion itself. I can see why something like that would be a huge asset in a world with such a huge variety of cultures. It’s like the ultimate diplomatic tool, and when you resolve things that way, you don’t even need to break out the phasers.

Though, of course, that also kinda makes for boring visual media in a lot of ways. While most people will accept an episode which is largely politics every so often, most people are much more partial to explosions and bat’leth swinging. Not that I blame them, but also… Deanna Troi.

Q4tQ: how many times will you try a game before you truly give up on it? Asking for multiple reasons. First, because it took me three classes to find one in Diablo Immortal that I enjoyed (barbarian) and that I could survive well enough with despite the controller lag on PC. >_< I’m still unsure if I’m going to keep playing the game or not, as I’m really starting to dislike the mobile and MMO features that take away from how I want a Diablo game to feel.

Second, because some part of my brain is encouraging me to try FFXIV yet again, swearing that somehow, the third time will be the charm. -_-

It depends on why it’s not gelling.

I have a friend whose opinions on games I trust who loves Astroneer. She’s occasionally called it her favorite game, and even if it isn’t the absolute pinnacle she spoke so glowingly on it I had to pick it up. Reader, I cannot even begin to get past the tutorial because the controls are so freaking confusing. It doesn’t follow any control scheme I’m familiar with, as far as I can tell — and that’s how rough the going has been, I can’t even really tell. And I tend to be a binge gamer, so I want to play a single game to near excess for a couple weeks, then shelve it for a while, and I know that even if I could figure out how to do the stuff the game isn’t even really telling me I need to do, I’d jump back in later and have to relearn the whole thing.

By contrast, if I’m just not at home in a game, I’ll binge it on occasion and then drop it when I remember the pain points I wasn’t fond of. Almost every summer I’ll pick up Pokemon Go again. Pokemon wasn’t really my thing as a kid, so I don’t have the nostalgia factor keeping me in it. I’ll start off with the best of intentions, but the multiple forms of irritating inventory management puts me off after a few weeks. How many of these stupid Weedles do I need to keep? Should I evolve my floppity Magikarp yet? I feel like I need a spreadsheet, and that’s just too much effort for me to expend. In this case there’s no real mechanical reason I don’t want to play, it’s just not my favorite, so I may as well come back to it every so often.

Q4tQ: in game and here ive seen alot of good talk about di, on twitter i keep seeing recommended posts talking nothing but bad, due to microtransactions, apparently having to do with one report saying it would take 100k to max out a character. What do u think of this.
Im instinctively critical because idk where this report is and what it entails. My first thought is “why would u want to max out a character 4 days after release?”. I wonder if the alleged price is because of essentially buying out your entire time investment. If day 1 of Shadowlands you could buy anima , reputation, gear , levels, rare drops ect i could easily see it costing a few thousand. But that would be a non issue because most ppl play wow to play wow and would get most of that stuff just questing and fighting occassionally grinding for the few rare items they really want.

But as far as i know it IS bad. That like…u can only get without money one legendary crest per week and that only gives a .5% chance at a legendary gem.

As someone who plays a lot of mobile games, the monetization scheme for Diablo Immortal is freakin bizarre. My experience is that, if you just want to play casually you can do so absolutely completely free. There’s no energy limiter or token-based actions, there are no special geegaws powering you past intentionally hard levels, there are no gatcha loot boxes to grind out, and the really good class isn’t locked behind a paywall. The thing is, as soon as you decide you want to get even a little bit competitive, you almost have to start spending money regardless of your personal skill. It all revolves around those legendary gems and crests, and how they function in PVP. However, you can play the game forever without setting foot in a PVP setting — in fact, many players probably wouldn’t want to PVP regardless. I guess that may, technically, sort of be a gatcha loot box, considering the random nature of legendary gems.

If you’re just going to play casually, the battle pass may be worth a look, since you will accumulate things like crests and gems a little more quickly than if you just play free, and the scope of this game seems to be broad enough to justify a de facto “subscription.” Beyond the battle pass, I’m not sure how worthwhile it’ll be for people who just want to throw $10 at the game every so often — this is the type of player I am, typically. I’m willing to invest a few bucks for cosmetics or whatever if it’s a game I like and I want to support the developer, but I absolutely refuse to do so if it’s going to give me a leg up over other players beyond what a good grind session or two will net me.

My own plan is mostly to just play DI until it’s not fun anymore, which won’t require me to spend a cent.