What are Location cards in Hearthstone, and how do they work? 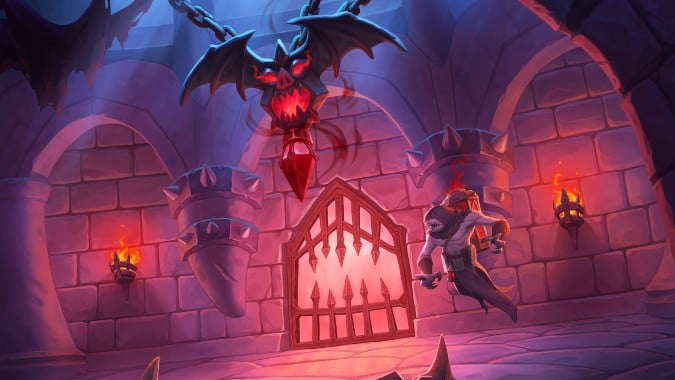 Hearthstone is getting a new card type for the first time in five years, and only for the second time in the game’s history. Location cards are arriving with the Murder at Castle Natrhia expansion: cards that represent specific places from the world. When you want to start going places, you play your Location card on your board alongside your minions.

But just what are Location cards? Let’s go over all the information we currently have about this brand-new card type to Hearthstone, speculate about why they’re being added to the game now, and take a look at the actual cards that have been revealed so far. 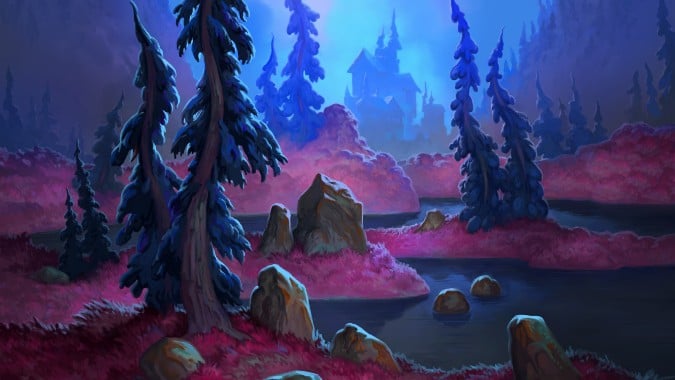 How do Location cards work in Hearthstone?

Locations cost mana to play — same as every card in Hearthstone — and take up board space just like a minion would. For the purposes of interactivity, they behave somewhat like Dormant minions, in which they can’t be attacked or removed neither by the player nor by their opponent, and they’re immune to anything that would only affect minions, such as cleave attacks, or spell effects that wipe out minions from the board.

The difference is that the player who controls the Location will be able to interact with it: each Location has an effect which affects some minion present on the board, and the player activates that effect by making a dragging motion from the Location to the target minion.

The final thing of note is that activating a Location’s effect always incurs a two-turn cooldown. The Location will visibly close shut on the board immediately after it’s used. On the player’s next turn, the graphic will show the Location only be slightly opened, indicating that it’s still on cooldown. Only on the turn after that it’ll be fully opened again, and usable. It’s an interesting visual effect that neatly conveys the timing — you’ll know it when you see it. 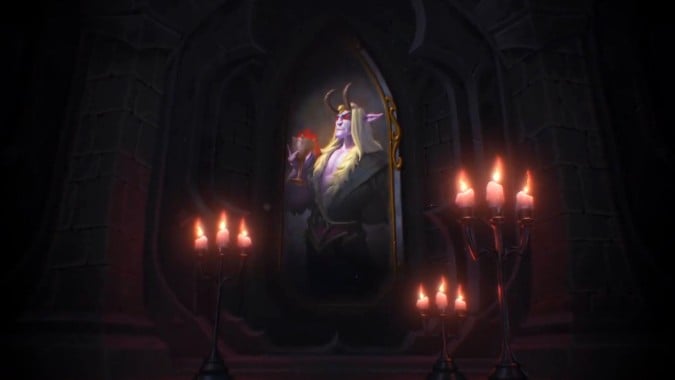 Why are Location cards being added to Hearthstone now?

Most card games have more card types than just minions that attack each other, and several such games also feature some card representation of locations. We’ve seen many different concepts throughout the years, such as Lands in Magic: The Gathering, Landmarks in Legends of Runeterra, and Locations in the upcoming Marvel Snap.

In each of those games, the location card serves a completely different purpose: they’re mana generators in Magic, and objectives to control in Snap. Each game has its own particular set of rules, but the concept of representing locations within the game world is more of a design idea, mostly agnostic to game rules initially, and molded to them eventually.

When you consider how commonplace it is for card games to feature locations in some way, it’s logical to think that they would be introduced to Hearthstone at some point. However, Hearthstone rarely introduces new card types: the only time we’d seen that before was with the introduction of Hero Cards in the Knights of the Frozen Throne expansion in 2017. It’s somewhat surprising to see the developers doing so again — but at the same time, it makes perfect sense.

Either way, the developers stated that this is a permanent addition to Hearthstone, and much like with Hero Cards, we’re likely to see new Locations pop up every now and then, but they might not be present on every single set from now on. It probably depends on how successful the experiment on Murder at Castle Nathria will be — how players take to Location cards, and how important, strategic, and fun they end up being. 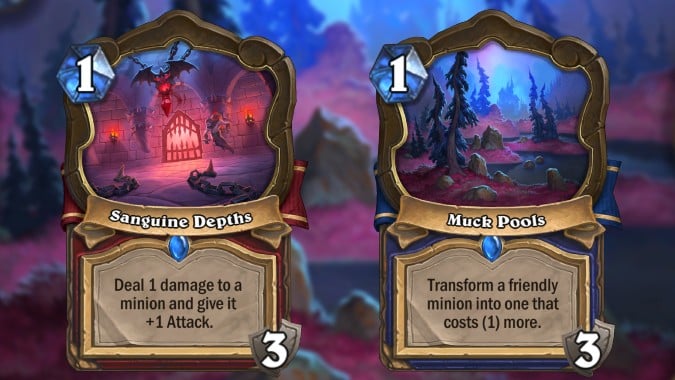 Which Location cards will be in Murder at Castle Nathria?

Each class will have a Location card this expansion — and who knows, we may see multiple locations or neutral locations. We don’t know what all of the Locations will be, these are the cards we’ve seen so far.

Warrior: Sanguine Depths allows players to “ping” minions for 1 damage and, if they survive, grant them +1 Attack — an effect which has been historically used by the class both for buffing their own minions (and activating Enrage and other effects) and for finishing off enemy minions.

Shaman: Muck Pools brings back Evolve effects to the foreground. Shaman has relied on Evolve-based strategies many times in the past, and Muck Pools provides a very cheap and reliable way to do so. 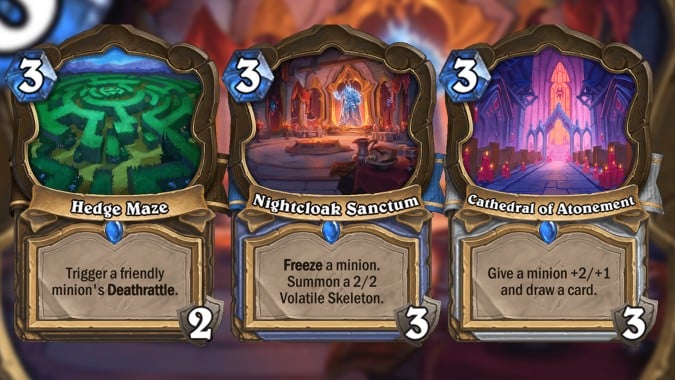 Druid: Hedge Maze  seems to enable the Deathrattle Druid archetype — something which has been pretty rare in the history of Hearthstone (though it does remind us of the Hadronox days). It should be interesting to see how this unusual archetype pans out.

Mage: Nightcloak Sanctum allows players to Freeze minions and summon many spooky, scary skeletons. We do know that Mages will get many cards this expansion centered around the idea of summoning Volatile Skeletons and then re-summoning them — or blowing them up! — with Kel’Thuzad, the Inevitable (what a great title, by the way).

Priest: Cathedral of Atonement provides a very good way to buff minions and draw cards. This seems like a very solid card, considering that after you pay the initial three mana, you get an engine for drawing three more cards essentially for free (you do need to “pay the price” of buffing a minion) during your future turns. 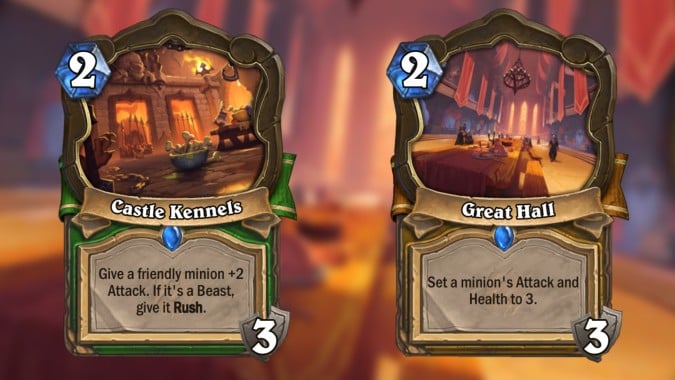 Hunter: Castle Kennels is one more tool to help Beast Hunter decks — not that the archetype needs any help at the moment, but who knows what the meta will look like once the expansion is out. Either way, this card indicates that summoning and buffing Beasts is probably still going to be what Hunters are about.

Paladin: Great Hall reinforces the Token Paladin (or “Dude Paladin”) archetype, which might be making a resurgence in Murder at Castle Nathria, as indicated by many of the other cards revealed so far. This Location lets you instantly turn a simple 1/1 token summoned by your hero power into a 3/3 minion, but it also has defensive uses, allowing you to shrink a bigger enemy minion down to 3/3, if needed. Seems very useful. 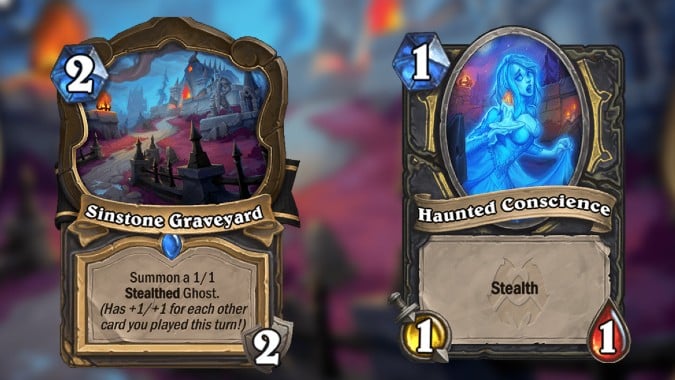 Rogue: Sinstone Graveyard is a very exciting card if you’re a fan of the good old Miracle Rogue archetype — a deck which tries to capitalize on effects that get stronger the more cards you can play in a single turn, and achieves that by playing many, many cheap cards (and cards that make other cards cheaper).

This Location summons a 1/1 Haunted Conscience with Stealth, but that minion gets +1/+1 for each other card you played that turn — an effect that reminds us of the classic Rogue Legendary, Edwin VanCleef himself. 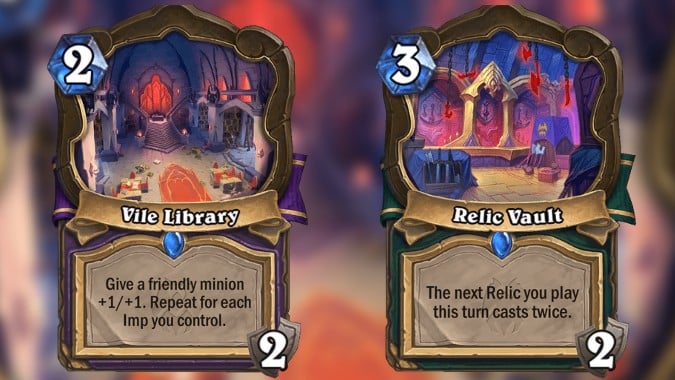 Warlock: Vile Library seems to be a key part of a new archetype Warlocks are getting this expansion: playing many Imps, and buffing them. Their Legendary, Imp King Rafaam, makes it all come together. This Location can be very powerful if you can fill your board with many Imps, so we definitely expect players to try to make this archetype work.

Demon Hunter: Relic Vault is a card that doesn’t say much at first glance. What are Relics, you’re probably asking? Well, this is a brand-new concept for Demon Hunters coming with the expansion, and here’s what they look like: 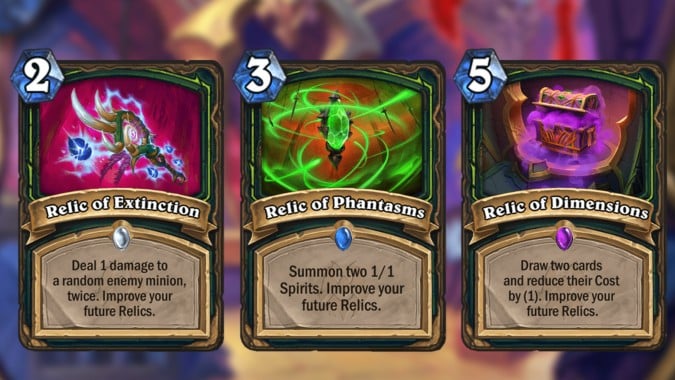 We’re still missing information about what the “improved” versions of these Relics look like. We also don’t know yet if we’ll see any neutral Locations, or if a few classes might get a second one. Nevertheless, we’ll keep this post updated as we learn more!

Blizzard Watch is made possible by people like you.
Please consider supporting our Patreon!
Filed Under: Location, Murder At Castle Nathria
Advertisement