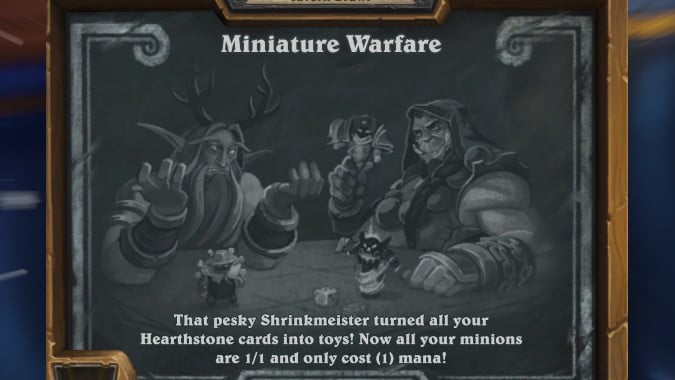 Everyone loves toys for Christmas and you’re going to be playing with toy versions of your minions in Hearthstone’s Miniature Warfare Tavern Brawl. We here at Blizzard Watch have connections, so please give a warm Blizzard Watch welcome to our toy expert, coming all the way from Ulduar to help us with this Brawl, XT-002!

Players first saw this Brawl in 2016. It made multiple appearances in 2017 before returning in 2018 as a Standard Brawl. It received the Brawliseum treatment for 2019. After that, it was locked in Hearthstone vault until its return in this year.

Brawls are often a proving ground for new mechanics. This particular Brawl led to the Legendary card, Jepetto Joybuzz, in 2019’s Rise of Shadows expansion. The Brawl’s main mechanic is the same as Joybuzz: set mana cost, health, and attack of minions to 1. While Joybuzz can only affect two cards, the Brawl affects every single card in your deck.

As a Constructed Wild Brawl, the overall size of your collection will make a huge difference in the decks you can play — and how difficult it might be to get a win. 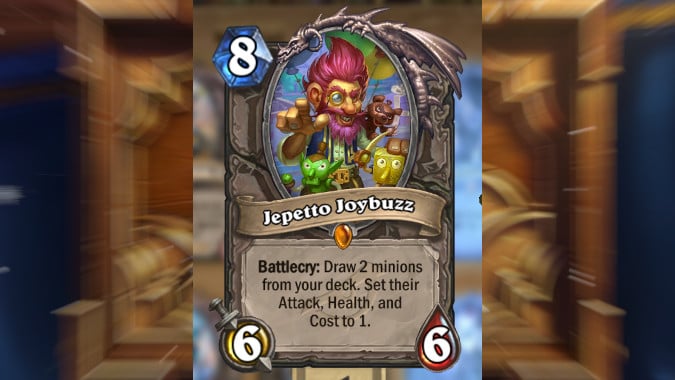 Like most Constructed Brawls, the key to victory is finding a great deck. Over time, players discover the meta — the deck (or decks) that are particularly strong given the ruleset. These lists are published on sites like ours and others. They become dominant, then counter decks rise and you fall into the same sort of ‘meta’ as you see on the Ladder.

In my games, I have found the Brawl rules to be a little inconsistent with summoned minions. For the most part anything summoned — like Gravewing summoned from a Stoneborn General — will also become a 1/1. But there were a few times when the summoned minion retained its stats. 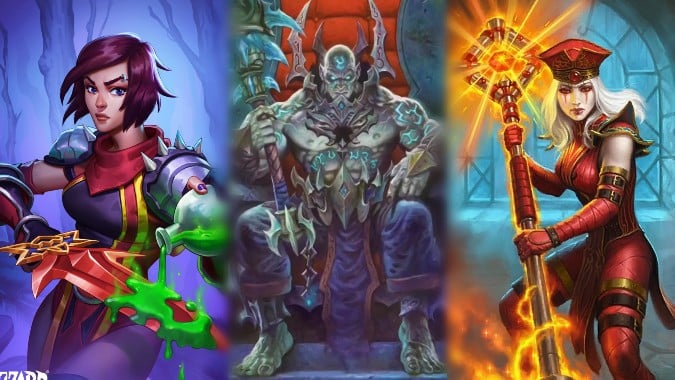 I’m going to start with more of a concept than a specific deck list because I lack the cards to make it and take it for a test run myself. The key is to include the Jailer along with minions that summon other minions. The most effective way I’ve seen this done is with Neptulon the Tidehunter. Since Neptulon has Windfury and you get the tentacles attacking twice. With Jailer making your minions immune, it’s just a race to kill your opponent before the Fatigue damage kills you. Mossy Horror should also be a popular choice for just about every list. With all minions being 1/1, Mossy is a guaranteed board clear.

This deck tries to remove your opponent’s win condition. Your Discover cards give you flexibility to find whatever you need for your current situation, whether that’s more draw or a timely board clear. The alternative game plan is to set up a potential 36 damage turn. 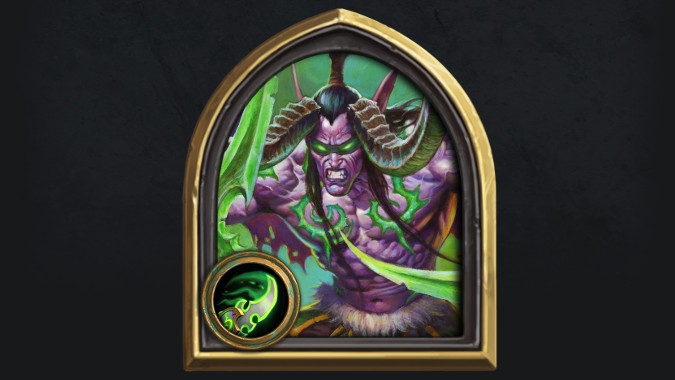 This employs many of the big, powerful minions you’ll see in several of these lists. It also leverages Demon Hunter’s excellent card draw abilities to keep your hand full of resources.

Friend of the blog, Ben Hearthstone, brings us this interesting Hunter deck. It’s full of big, powerful Deathrattle minions. It includes enablers like Play Dead, Nine Lives and Baron Rivendare to get even more out of your Deathrattles.

Reckless Apprentice provides AOE to attack your opponent’s board. Discount Rune of the Archmage and Drakefire Amulet down to 1-mana with Balinda Stonehearth. You could also cast them at their normal cost and then recast them with Grey Sage Parrot. 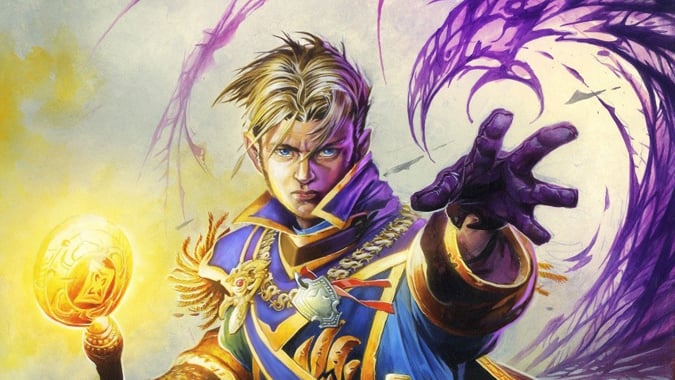 This comes from DrCthulu. Your plan is to get Spell Damage cards like Prophet Velen and Bloodmage Thalnos on the board with plenty of mana left to bomb your opponent’s face with Mind Blast, Holy Smite and your other spells.

Deck building is not my strong suit, but here’s my attempt. I picked a bunch of powerful, expensive minions like Ysera the Dreamer, The Lich King, Marin the Fox, Baron Geddon, Rin, the First Disciple, Reno Jackson, Sathrovaarr, Zephrys the Great, etc. I also included Brawl MVP Mossy Horror, and Primodial Drake for a bit of AOE. I chose Warlock because you often run out of cards and Warlock’s draw Hero Power is a great way to keep your hand full of options. I’ve won abut 50% of my games with it.

Getting a win with a smaller collection can be challenging. Ben Hearthstone said it well, “there’s just so much broken stuff out there it’s hard to narrow down to 30 cards.” And if none of these decks work for you, check for more community decks on Hearthstone Top Decks. New Brawl decks keep being added and plenty of older decks still work well.

Overall, this is an enjoyable Brawl. There are a ton of viable cards and strategies, at least here in the early part of the Brawl’s cycle. Good luck getting this week’s pack!