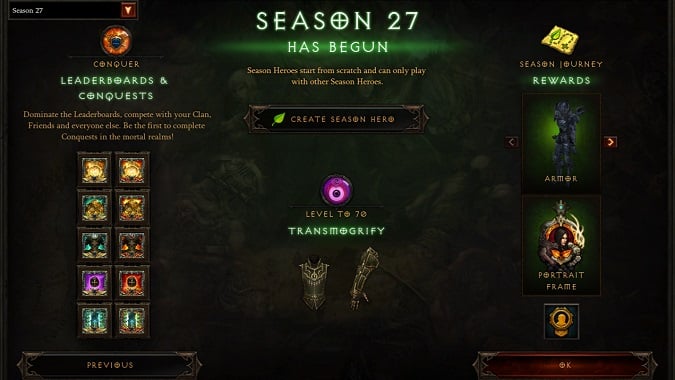 Diablo 3 Season 27 is well underway, but we’re expecting it to end somewhat soon, so if you haven’t finished your Seasonal Journey, here’s your reminder. If you want to complete the latest Season Journey for gear, transmog looks, and the creepy new pet — the Corvus Cadaverous — you’re going to have to get through this Season’s Conquests.

Conquests can be painful if you haven’t had to tackle them in a while (or ever). But don’t let these daunting goals fool you — they’re called achievements for a reason. And we’re here to help you get those achievements completed! Here’s what you should know going into Conquests in Diablo 3 Season 27.

Conquests are uniquely Seasonal achievements; leaderboards exist specifically for Conquests and reset every season. The last three chapters (Destroyer, Conqueror, and Guardian) require completing a Conquest each to progress in the season’s journey. The Conquests aren’t assigned; the goals involve completing 1 / 2 / 3 (depending on the chapter) Conquest-type achievements out of the pool of five available in the season.

While Conquests are more difficult than the average achievement, they also scale in difficulty. Some are extremely hard to achieve with solo play, and some only require level 70 and the right gear. We’re lucking out this season in that our Conquests are pretty darn achievable. 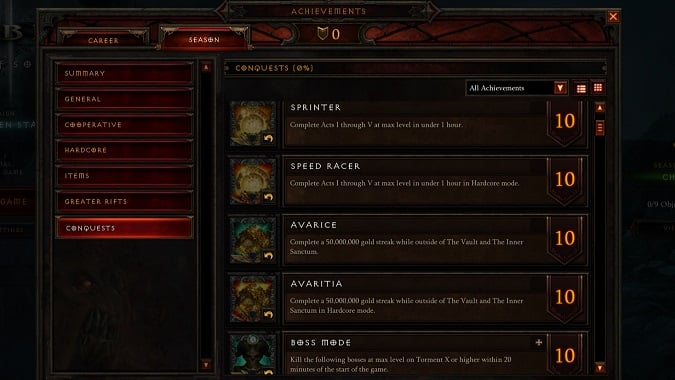 What Conquests should you complete in Season 27?

The easiest Conquest for Season 27 is Avarice / Avarita. It requires a few specific gear pieces to be a real “easy mode” achievement — get yourself a Goldwrap belt, a Boon of the Hoarder legendary gem (leveled as close to rank 50 as you can manage in running Greater Rifts), and an Avarice Band ring. Equip (or load in Kanai’s Cube) a Leoric’s Crown and socket a Flawless Royal Emerald to make this even easier, but the world won’t end if you don’t have a top-tier emerald.

The next easiest requires a bit of effort in gearing and paragon levels — The Thrill / Super Human. With the introduction of the Legacy of Dreams legendary gem, this Conquest has become significantly simpler for almost every class, as most have a solid LoD build that can be thrown together with low effort. Similar to the Legacy of Nightmares ring set, the Legacy of Dreams gem increases damage dealt and reduces damage taken, but requires no set bonuses equipped on the player. While the LOD gem normally allows for individual set items, having them equipped will keep you from completing this conquest.

Every legendary item equipped contributes to the increase, but try to get the gem to rank 25 so you unlock the double bonus for Ancient items. The Rank 25 LOD is not essential; in Season 21, I completed Speed Demon with the majority of the gear necessary for the Demon Hunter Legacy of Dreams build (but not all) and a Rank 15 gem. Sadly, not every class has a solid build that can take advantage of Legacy of Dreams, making it a bit frustrating for some of the player base.

Boss Mode / Worlds Apart is this season’s first Conquest that is much easier to achieve with a group. At level 70, killing the listed bosses is next to no effort. Kill them all in 20 minutes? Now it’s a challenge! 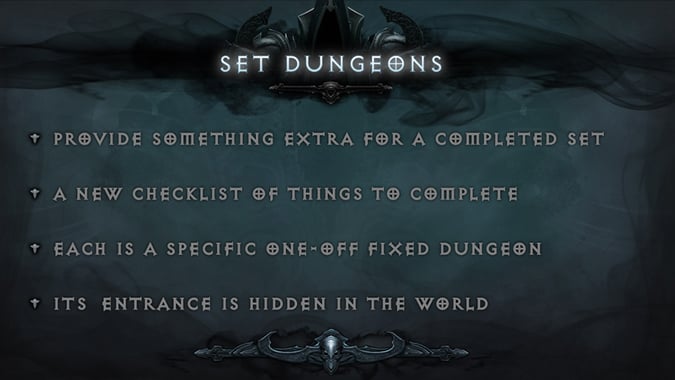 Sprinter / Speed Racer is the most challenging conquest to complete in Season 27 when solo. The Conquest requires going through the entire story mode, Acts 1 through 5, with all the associated story and boss kills in under an hour. Knocking this out involves a lot of prep time and requires an excellent team working together.

Season 27’s journey is definitely going to require some effort to complete, but you’ve got this. Go tackle the Conquest achievements before Season 27 ends; your murderous cadaver pet awaits you!