If raiding guilds were actually honest 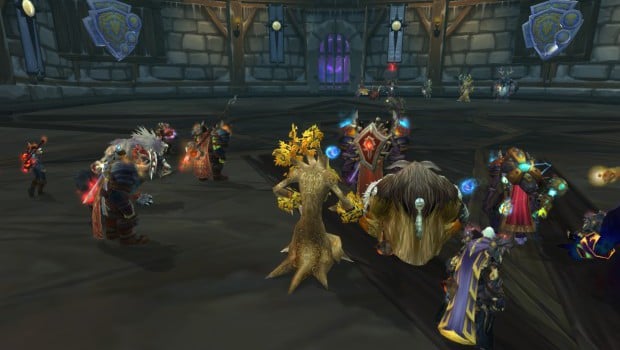 I was put in charge of drafting a guild policy statement after losing a coin toss. In the middle of drafting and redrafting to try to phrase things as diplomatically as possible, it occurred to me that officers everywhere could save a lot of time and trouble if we just dispensed with the diplomacy and went straight to brutal honesty on what most guilds are actually like.

<Dumb Latin Name> is a large mythic raiding guild on (US server). We are comprised of:

Over time, the competing motivations of these groups guarantee the implosion of the guild in a firestorm of clique-driven accusations and threats, but for the moment we are muddling along.

General Membership: The guild has an open invite policy for non-raiding members and friends because the guild leader is afraid of being called an elitist. If you’ve been turned down for a raid slot but want to slither onto the mythic team when we get desperate for your class or spec, please apply for general membership. If you’re a blithering idiot who never shuts up in guild chat and is an endless source of irritation and drama, we suggest being friends with a raider we can’t afford to lose.

PvP Membership: If you want to participate in rated battlegrounds, please contact our PvP officer, Pwnsyoo, during one of the 15 minutes per week that he’s on his main. He can otherwise be reached on his flavor-of-the-month alt likely to be discarded when patch 6.1 hits and nerfs resto druids into the ground.

Raiding Members: All members or applicants wishing to raid are required to submit applications on our website. Needed classes or specs will be accepted regardless of ilevel, experience, or severe personality disorders.

We expect raiding members to make reasonable efforts to keep their characters geared outside of the raid (e.g., garrisons, challenge modes, LFR). If you don’t bother doing this and expect your low ilevel will grant you priority on raid drops, you’ll probably get away with this once or twice before we figure out what’s going on.

Attendance Policy: We require at least 85% attendance from our raiders. This does not apply to:

Be on time. If you’re constantly late, we will tolerate this in an increasingly passive-aggressive manner until we can replace you.

Bench Policy: Raiders will be rotated in and out of the mythic raid as necessary to assure a corps of geared and experienced raiders. Because we don’t have many additional options for our tank and healer teams, most people on the bench any given evening are likely to be DPS. If you make the officers miserable with constant whining over how you’re not in the raid as much as you want, we advise you to rethink your desire to play the most overpopulated role in the game.

Loot: We used a modified /roll system because no one wants to deal with the administrative hell of DKP. After the inevitable night when the most hated member of the raid wins five pieces, we’ll go back to loot council.

Raid Policy: We expect our DPS to use the most optimal spec in any given patch. In practice, our ability to enforce this is close to zero as our recruitment officer played a BM hunter through 14/14 mythic Siege. If you can do chart-topping damage armed only with a kazoo and a level 47 boar, your spec is your own concern. If you’re at the bottom of the meters on a spec that’s under-performing this patch, that will be a problem.

Personal responsibility: We use PhoenixStyle and BigBrother to monitor flask, potion, and healthstone use. For the most part, raid leaders are too harassed in the middle of raid to keep a close eye on this. However, if the raid runs into serious problems and we’re looking for a scapegoat, expect us to single out people who aren’t using their potions or healthstones. We recommend blowing both of them when it’s apparent that a wipe is imminent, because we’re too lazy to comb the logs looking for timestamps.

Blizzard Watch is made possible by people like you.
Please consider supporting our Patreon!
Filed Under: Brutal-honesty, Guilds, Raid, Raid-policy, Raiding
Advertisement