Know Your Lore: The Third Host 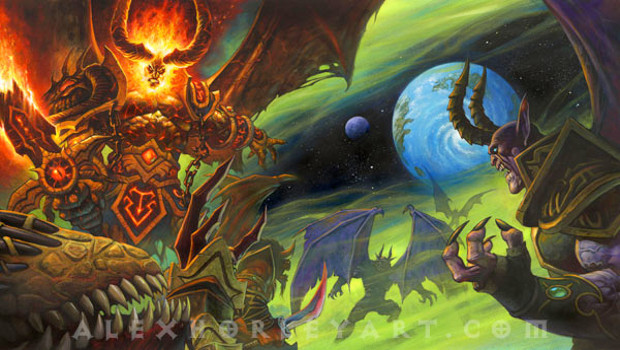 Hi. I don’t want to waste a lot of time here — we have lore to get to — but including a brief note thanking you all for what you’ve done this week seems important. So here it is: thank you very much. Now let’s get back to knowing some lore.

When we talk about the Burning Legion, one of the more insidious threats it poses to a world comes in the time before an actual invasion, when evil cultists begin springing up and the proliferation of demonic magics begins. Cults that seek to gain power by engaging in these practices are everywhere. On Azeroth, the largest such organization is the Shadow Council. Descended from the shadowy cabal that led the original Horde under Gul’dan (and also named the Shadow Council – they’re evil, but they’re not marketers) the Shadow Council today seeks to subvert the power structures of the Horde and Alliance, and operates based on a cell structure. It’s one of those cells that interests us right now. The Argus Wake. It’s unusual for the Shadow Council in many respects.

For starters, the Argus Wake is a primarily human organization. Considering the original Shadow Council was founded by orcs, and that most of the leadership of the modern Shadow Council is orcish, this is interesting in and of itself. The Argus Wake is a very secretive organization, which operates out of the former kingdom of Alterac and is allied to the forces of the Syndicate there — the recent events of the Cataclysm have caused them to recede from overt activities (for one thing, they’re now behind the forsaken lines, as the Alliance city of Southshore was destroyed and the Horde claimed total control of the region) but it’s doubtful that they’re destroyed. Indeed, they may have even grown in power. If you’re a living, breathing human in that area, the Syndicate and thus the Argus Wake may be your only hope for survival.

What little we know about the Argus Wake comes from a letter discovered by Alliance forces. One thing we discover from this letter is that the Argus Wake isn’t limited to Alterac. Indeed, the true master of the Wake is far further afield, usually requiring the use of a Shadow Mage or, in this case, a courier to reach him or her. (The letter seems to assume a male, but it’s not wise to make assumptions.) But another revelation in the letter is deeply, deeply disturbing.

In addition, we have urged the Syndicate to aim for the city of Stromgarde in the nearby Arathi Highlands. The city is a battlefield between our forces, ogres and the humans of Stromgarde, but we feel that with careful tactics we will own this once great city.

And when this is done, the next stage of our plan may begin. With a nation of our own and a base of power in this region, we may then prepare the way for the Third Host.

Soon, the Legion Lords will reward our works by raining fire from the skies once again!

The interesting and disturbing thing here isn’t the plans of the Argus Wake to use the Syndicate to conquer Stromgarde and use it as the basis for a nation of demon worshippers — if anything, they’re further from that goal than ever. No, the mention of ‘the Third Host’ is what grabs my attention. Because we have no idea what is meant by that phrase. Does it mean some sort of military force (one meaning of Host is a large armed group) or does it mean something else? It could simply mean another Legion invasion. If we count the War of the Ancients and the Third War, then Azeroth has seen two Legion ‘Hosts’ invade it over the years. But let’s consider options. The argument could be made that the Third Host has nothing to do with a military formation but rather something far more sinister.

When Sargeras was defeated at the end of the War of the Ancients and barred entry to Azeroth, denied the power of the mysterious Well of Eternity, he didn’t meekly accept defeat. That’s not Sargeras’s style. Instead, he created a dread Avatar, a form he could use to enter our world and place a portion of his essence within. A host, if you will. Using that Avatar body, he confronted the Guardian Aegwynn and deliberately allowed her to destroy said host, in order that he might move into her body. In time, she decided to conceive a child in order to pass the power of the Guardian directly to said offspring instead of allowing the Council of Tirisfal to choose the next Guardian — and in so doing she inadvertently gave Sargeras the opportunity he’d sought. Her son Medivh became Sargeras’ next host body. His Second Host, one could say.

This leads us to a question. If the Avatar of Sargeras was his first host, and Medivh his second, what could the Argus Wake be attempting to create for the fallen Titan? What would his Third Host be? We have little information on this. The intercepted letter doesn’t tell us who the Shadow Council has appointed to be the head of the Argus Wake, only that Nagaz reported directly to said person, and Nagaz is dead. So we’re left with very little information on the Argus Wake. We know it’s named for the planet Argus, the home world of the original eredar who became the foundation for the Legion as a whole. What does the peculiar name they’ve chosen for themselves tell us? Are they the Argus Wake, as in, a kind of funeral celebration for the dead world of Argus? Is Argus itself dead? Or are they the wake in the same manner that a massive ship leaves a wake in its trail — are they the aftermath of the Legion’s passage? We clearly don’t know that, either. But we do know that they plan to create an actual nation of Legion servitors on Azeroth, and that’s pretty bad in and of itself. With the loss of their main servitor in the Alterac region and the growing power of the Horde in that area, they might seem balked.

But remember, Nagaz’s master, whoever it is, reports directly to the Shadow Council itself. Said person could well be anywhere, in any land, working to rebuild the Wake’s influence. And with the past several years, between the rise and fall of Deathwing, the Twilight Cult, our occupation with Pandaria and the final clash with Garrosh Hellscream at Orgrimmar, and now our expedition to Draenor, the Wake has had plenty of time to work from the same shadows that birthed it. If the Third Host is the Legion itself, the time is ripe for it to strike. And if the Third Host is something far, far worse — a new body for Sargeras, a new means for the Dark Titan to walk Azeroth bodily — then we are absolutely not ready for it.

Thank you again for reading Know Your Lore. We’re just getting started here at Blizzard Watch — we have all of Blizzard’s lore and story to share with you here at our new home.