Lightsworn: Return of the ret 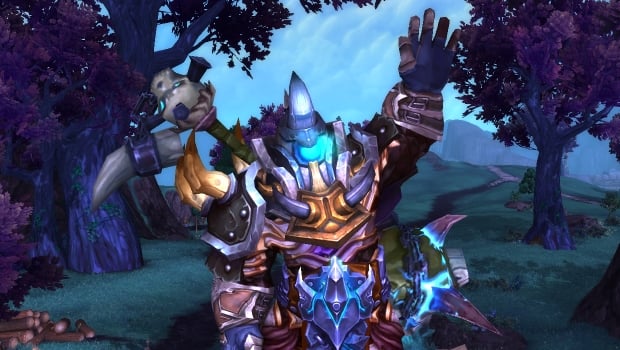 Well, here we are again. It seems like only yesterday I suffered some sort of spec-centric amnesia and eagerly regaled my misadventures of leveling a holy paladin over on W̧̧̘̪̳̝͉̥͉͙̱̥̹̜͚̜̱̹̺͗̈́ͬ͛͛̏̋̐͒̍ͤ̐ộ̧̹̹̼͖̗͚̳͓̘̠͕̲̻̱̜̍̇͑̆̈́̊̑ͬ͛ͧ͝͠W̢̺̞͕̦̙͔̍ͪ̾͌ͯͧ̋̍ͦ̊̏̌ͣ̈́ͩ͆̚͘̕͠ ̸̛̗̫͚͔͈͛͊ͥ͑̇̉͋̕͘I̧̧̝̱̗̱ͧͬ̔̉̌̀ͥͫͪ̎̈̓͑̕n̸ͬͤ̒ͫ͐ͦ̏̏̏͛̓̓́ͣ̓̅ͧ̉̐́҉̥̗͚̖̼̥ͅs̶̵̢̜͔̘̳͓̙̹̰̤̣͕̙̲̗̪̩̪͛̿ͭ́̿͂̋ͯͩ̔̋̂̍͒̕iͪ̅̓͊͟͏̵̤͎͕̙̪͈̣̟̳̱͕̥̬̲̙̮̻͉ͅd̴̷̛̳͙͍̲͇͓͈ͮ̓͌̌ͬ̂͗́̇̈͢ͅe̱͓͕̰̥̬̬͎̲̥͕̭̻̞̬̩ͪ͑ͣ̿ͥͦͧ͂̒͐̃ͭ̓̚͞͡r̯̤̱̰̙̥̱̟̣̣̫ͬͣͭ͐̓͂̋͂̀͐̊͒̎ͧ̂͒̓̀̚̚͢͢͝. Looking back on those articles I can see now that it was my folly that precipitated the eventual decline of the site as a whole, and for that I sincerely apologize. I will attempt to refrain from such foolish healing in the future, lest the curse follow me to Blizzard Watch.

In all seriousness, I am very excited to be writing about retribution again. Before we get started I wanted to dedicate some words to thank everyone who has made this all possible:

With all of that out of the way let’s pocket the handkerchiefs and get down to some business.

Through the fire and flames

For better or worse, retribution made it through the item squish and the launch of Warlords of Draenor mostly intact. Granted, our once gleaming and robust rotational toolbox has been demoted to a tattered tool belt thanks to the removal of abilities like Inquisition and Guardian of Ancient Kings, but the heart of ret gameplay is still beating.

I’ll admit that losing these abilities wasn’t quite as painful as I originally thought. Ret is a lot more fluid now, with the relaxed rotation making the spec its most accessible since Wrath of the Lich King. And despite my reservations about how differentiating player skill through optimal play becomes more difficult with less rigid rotational requirements, I will gladly bite the bullet if it means more people are speccing their paladins the right way.

Of course, I would be remiss to herald in the return of the ret column without complaining even a little bit. To illustrate my current misgivings, allow me to appeal to the more graphically inclined among us. 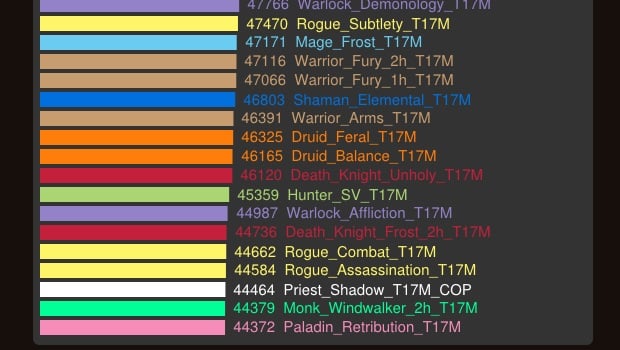 All of the standard warnings apply here – these rankings don’t reflect realistic conditions, SimCraft is only a tool in a larger kit, etc. Truthfully what I’m more concerned about is how these results compare to the same sims run using lower ilevel gear, normal and heroic, and the observation that in all three conditions, we remain in the bottom third of melee DPS specs in terms of raw damage output. It is true that our damage appears to be trending up with increasing ilevel, and that’s a bit of good news, but I still think there are a few problems that need to be addressed.

Even before you factor in tier bonuses, the combination of Divine Purpose and Final Verdict most often yields the highest returns, and with our tier… well, forget about it. If things remain as they are, we’ll be using DP/FV until we’re old(er) and gray(er). To be fair, I actually enjoy the talent combo and what it does to our rotation, but I’d hate to go the rest of the expansion without Seraphim and, dare I say it, Empowered Seals seeing their moment in the spotlight. The buff to Empowered Seals in 6.1 could make the talent more competitive, but Seraphim’s static bonuses will only get worse with each successive tier.

All about that base

Our base DPS has suffered despite buffs to our primary abilities in an attempt to compensate for the loss of Inquisition. This problem is only exacerbated by Divine Purpose and the proc-less droughts the talent sometimes brings, but even so our output seems as consistent as my ability to land jokes. Part of this inconsistency is due to losing Inquisition’s 30% holy damage buff, and part is due to the devaluation of haste (even despite the recent change haste remains one of our worst stats, sometimes falling behind versatility, of all things).

And yet, I remain hopeful of ret’s future. Our burst damage remains strong, and our utility is hands-down amazing (see what I’m talking about with the consistency thing?). With stats like mastery, multistrike, and crit being at the top of our list, our output should continue to scale nicely into later tiers, though I wouldn’t mind if they tweaked a few knobs before then.

I thought I’d round out this first column by fielding questions from Twitter, the same way Adam Koebel and Chase Hasbrouck have done. Let’s see what you’ve got!

@Ionizedadam asked:
Does the 4 wing Avenging Wrath glyph make you look like a badass or a butterfly?

There’s no reason a butterfly can’t be badass!

@Knate_CTR asked:
Do you ever see Empowered Seals becoming the go-to L100 talent? What would it take to get it there?

The short answer: no I don’t, and it would take a miracle.

The long answer: to me, Empowered Seals is just begging to fill the “high risk, high reward” hole in our kit right now. In my opinion, seal-twisting with EmpS should result in the highest single-target DPS out of all three T7 talents because it is without a doubt the most difficult playstyle to pull off, as long as its DPS doesn’t completely outstrip the other two talents in its tier. Basically, a couple percentage points would be a fine trade for the increased complication of buff management.

What I’d want to avoid is making the talent so good that every Tom, Dick, and Harry sees that EmpS yields the highest DPS, specs into it, gets frustrated with the difficulty of seal-twisting, and either quits or petitions for a change.

@Shenanigans930 asked:
Proc all the things. Do you like it? Feel as if it’s good design? What would you change?

Overall I would say that I’m very much enjoying the proc-centered playstyle of the Warlords ret. Sometimes the variance between pulls nags at me, but I’d say the pros outweigh the cons.

As for whether I think it’s a good design? Honestly, I’d say so. Our priority being the way it is means that simply hitting a button when a proc lights up won’t result in the highest damage output, so even though it looks like we’re playing a slot machine, we’re not. It’s more like video poker.

@Rhidach asked:
What effect did the haste buff have on ret?

Very little, I’m afraid. We just can’t seem to get enough of it for it to provide a significant benefit. Maybe in 6.2 we’ll see haste make a comeback, but I’m a bit skeptical.

@applecidermage asked:
Why is it always ret paladins who teabag people in LFR?

No ret paladin I know would behave in such a manner, those must be holy paladins masquerading as ret. Light knows they have nothing better to do than goof off.

Alright, that’s it for now. Feel free to leave some questions for next time in the comments below!

Blizzard Watch is made possible by people like you.
Please consider supporting our Patreon!
Filed Under: Paladin, Retribution, Warlords Of Draenor
Advertisement