Role Play: Choosing the right name for your character 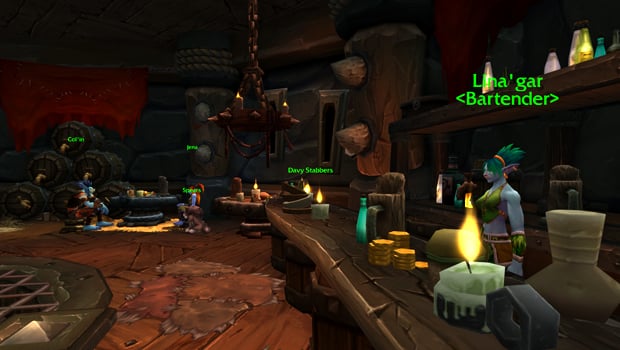 One of the first things a roleplayer tends to think about when creating a new character is just what that character should be called. What makes a good name? Can the character have a last name? Do you name the actual character the name they’d like to be called, or a nickname? What are some lore-appropriate names, what makes a name sound like it belongs in the Warcraft universe? And what exactly are you supposed to do if that name is taken?

Although you can choose to roleplay whatever you’d like, names are another matter altogether. Blizzard has its own set of rules for what names are appropriate and inappropriate to use for player characters. Roleplaying servers also have a set of their own unique naming guidelines in addition to the regular name restrictions of the game.

If a player is found to have such a name, he/she may:

Here’s the catch, though — Blizzard doesn’t actively patrol for players that violate these rules. Instead, if a player comes across a name that they find objectionable or outside of the guidelines, they can report it and bring Blizzard’s attention to it. The upshot of this is that you’ll often find names that don’t quite fit into the rules on RP servers — and while those names exist, they run the risk of being forced to change at any time. This also means that you can create a character name that breaks those naming guidelines — but if you choose to do so, you run the risk of other players reporting you for your name, at which point you’ll be forced to change it. If you want to avoid that issue, you’re best served by simply sticking to the rules to begin with.

Most races in Warcraft don’t really have last names to speak of — and the game won’t allow you to create a last name regardless of what race you happen to be playing. You can, however, use one of the various roleplaying addons like MyRoleplay, XRP, FlagRSP or Total RP to denote a last name for your character if you wish. Different races in WoW have different naming conventions regarding last names:

Finally, keep in mind that when you are roleplaying, that name that is floating above your character’s head is a game mechanic. It’s not an indication of who your character is, and players that are in character aren’t going to acknowledge that nameplate, they’re going to ask your character to introduce themselves, or wait for them to do so. As long as you’re following the naming guidelines for roleplaying servers, you can make up pretty much anything you want in that field, and give them a proper name in a roleplaying addon.

And if you are in doubt, or are still in search of the most perfect name you can conjure for that brand new character, remember that Google is your best friend. Search for baby name sites, and remember that there are sites out there for just about every type of name under the sun. Pair the word names with a particular region of the world or period of time and see what comes back. Look up sites with foreign language dictionaries and hunt down words that best describe your character, see what comes back. Think of words that describe your character, look them up on an online thesaurus and see where that leads. The only restrictions to naming your character are the rules that Blizzard has put into place — which are remarkably lenient, all things considered — and your own creativity.

Blizzard Watch is made possible by people like you.
Please consider supporting our Patreon!
Filed Under: Character Name, Roleplaying, World Of Warcraft, Wow Rp
Advertisement