The paladin deck that won 33 games in a row 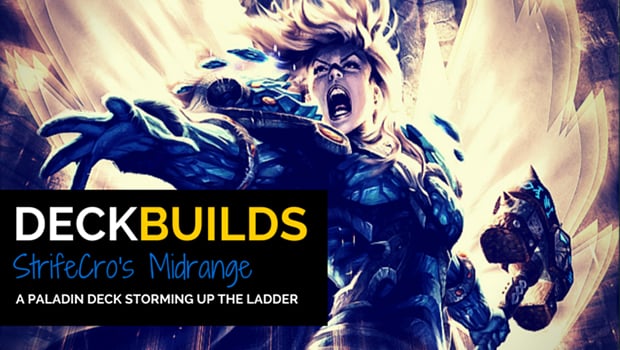 After the nerf to Undertaker, I started looking around for new deck ideas to tinker with and to use in my climb on the ladder.

My beloved hunter deck has been dethroned. I couldn’t rely on sheer speed and brute force to power my way up the ladder anymore.

Then I caught wind of Cloud 9 StrifeCro’s “winstreakadin” deck. Color me intrigued! I had enjoyed playing paladin decks in the past but I didn’t feel they were competitive or quick enough.

There have been multiple paladin decks running around lately and their popularity is only now trending upward. You used to not see paladins as much at all around the ladder but now they’re just all over the place. The advantage to playing the midrange paladin is that it provides you with a variety of tools to shape your gameplan: An aggressive plan with your minions where you apply consistent pressure on the board or a slower control match up where you shut down your opponent’s threats until you gain the advantage.

Prior to the Goblins vs Gnomes expansion, paladin decks suffered heavily in the early game and could not withstand the rigours of the hunter and warlock zoo decks that were all over. They would simply get dismantled before they could execute their game plan. But GvG added a few key cards to help paladin players out: Shielded Minibot, Quartermaster, and Muster for Battle. These three cards help provide enough of an early game buffer for paladins to start with.

Look for your Knife Jugglers, Shielded Minibot, and Muster for Battle. In fact, if you’re going second and you draw into a Quartermaster, you can open with your Muster for Battle on turn 3 and then follow up with a coined Quartermaster that will instil despair into the heart of your opponent. Throw away your expensive power cards. Keep a Consecration against hunters, paladins, rogues, warlocks, and mages. You might actually need that board clear.

The goal in the early game is to figure out your opponent’s game plan. A mech mage deck will attempt to swarm the board quickly but you have a variety of ways to handle this. Equality and Consecration give you a quick way out. Truesilver Champions, Knife Juggler, Shielded Minibots, and Pilot Shredders should help you go toe to toe against their board. The Pilot Shredders are worth it since they’re essentially two minions in one.

Drop an Acolyte of Pain early since it will at worst cycle for a card and at best net you three additional ones. If you have no plays, continue cranking out Silver Hand Recruits and attempt to trade or weaken your opponent’s side of the board to make it easier when you draw into a Consecration.

If you haven’t pulled off the Muster for Battle and Quartermaster combination, you can hold off until turn 8 to execute it. Your 3 newly minted Silver Hand recruits will be buffed to 3/3 and you’ll have a handy Light’s Justice equipped to help remove any active Divine Shields on your opponent’s minions (or clear out any weakened minions on the board).

There’s a variety of ways to neutralize your opponent’s advantages. Sit on your Mind Control Tech and wait for your opponent’s Dr. Boom to come out (or play the Tech when your opponent has enough on the board to make it worthwhile). Big Game Hunter is held in reserve against opposing Dr. Booms, the Molten Giants played in Handlock, or the large Ironbark Protectors in druid decks. Black Knights can be used in a variety of situations to punch a hole in your opponent’s defenses. Save it for Tirion in the paladin mirror. For anything big that you can’t kill immediately, you can render it a non-threatening by deploying your Aldor Peacekeepers against them.

If you’re still struggling, the combined 16 health gain from Antique Healbot and Lay on Hands should buy you enough time to stabilize yourself and assert control of the game. The Sludge Belchers are annoying enough to help defend against any offense your opponent can muster.

As you reach the late game, you’ll have plenty of options to win out. Your own Dr. Boom is now in position to start hammering away. If not, paladin staple legendary Tirion Fordring can come in and start smashing your opponent into submission. Loatheb can strategically be used to lock out your opponent during a key turn (such as against a druid on turn 9 so they can’t execute the Force of Nature and Savage Roar combo). A Piloted Sky Golem or a substituted Sylvanas can also be run in this slot to provide extra options.

Even if Tirion gets taken off the board, Ashbringer provides 15 damage spread out over 3 turns which you can use to drill your opponent or clear the way for your minions to do it. You have the life advantage here with the aforementioned Healbot and Lay on Hands so don’t be afraid to get in there and take some damage on your own. The Truesilver Champions will help negate some of the damage coming back your way.

No one ever said Hearthstone wasn’t a messy game.

The lone Ironbeak Owl will often be a deciding factor in your game. It could remove a key taunt allowing your board to steamroll in. It could shut down a Sylvanas on the board that could steal one of your precious minions. 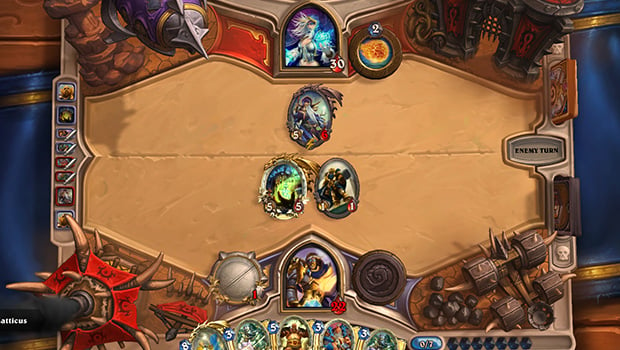 After Archmage Antonidas is played, Loatheb comes out the following turn negating the potential gain of Fireballs after. The Aldor Peacekeeper makes it easy to remove the Archmage from play. 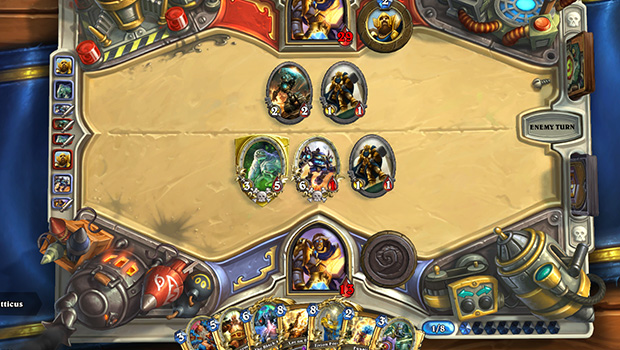 Despite my low health, I’m in an excellent position to stabilize. Make sure you count your hand size before casting Lay on Hands or else you make the amateur mistake of burning a card on the subsequent turn. 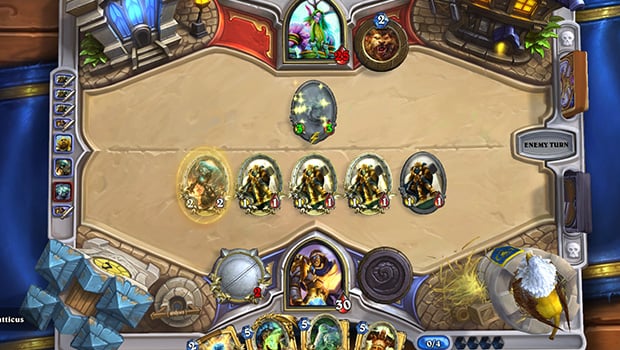 After I ended my turn, I kept muttering “No Swipe” repeatedly. Alas, the Hearthstone gods did not deem me worthy and thus my army of Silver Hand Recruits did not see a second turn on the board. What a massacre. At least the bot lived.

This a list of other cards you can swap in just in case you’re missing some of the pieces above. You’ll have to adjust your game strategy accordingly though. The Zombie Chows will do great in the early game in helping you secure an edge in the board advantage. I’d consider including at most 1 Defender of Argus to help reinforce your deck in case Mech Mage or other aggro centered decks are giving you a hard time. Scarlet Purifier will assist you greatly in any Deathrattle-centric deck, but with the Undertaker nerf, it just doesn’t seem as attractive to use. The rest of the cards help serve as alternate win conditions or as potential card replacements.

Rogue: I struggle with this particular class. Exercise care while you’re putting your minions on the board. Don’t over-commit. Rogue decks have a tendency to burst in damage and clear the board quickly. Keep your life total fairly high as their burst potential is insane.

Hunter: Try to draw into a Sludge Belcher or Consecration so you can control the flow of minions. Eventually, they’ll run out of steam.

Mage: With mech mage being the dominant deck type you’ll encounter on the ladder, shift to a more control style of game. Survive the early game and save your Consecration where it can give you the biggest advantages. I’ve encountered mages using Mirror Entity as the trap, so bait it out with an expendable minion.

Warrior: The control warrior match is an interesting one. While they can gain armor, you have the benefit of 2 sources of extra life allowing you to stay in the race. Play a steady game and a warrior deck will prove no trouble as you’ll eventually overwhelm them.

Shaman: Shaman threats are Lightning Storm and the upgraded Crackle which could ruin your day. Do your best to both control the board and keep it neutral.

Druid: Play a control style game here. Peacekeepers, Black Knight, and Big Game Hunter will easily win the game for you against the right targets. Expect Swipe to be saved against your Muster for Battle (as evidenced above). Save Loatheb for turn 9 if you’re expecting the Savage Roar and Force of Nature combination.

Paladin: Against the mirror, you’ll want to hold onto a Consecration of your own to counter their Muster for Battle. Black Knight should target their Tirion Fordring while your Big Game Hunter can target their Dr. Doom.

Priest: Try to mulligan into a Piloted Shredder. Expect your other minions get picked off by their Shadow Word: Pain or Shadow Word: Death. Your Shieldbots can be used as bait to save the Knife Juggler.

Enjoy and I’ll see you on the ladder!