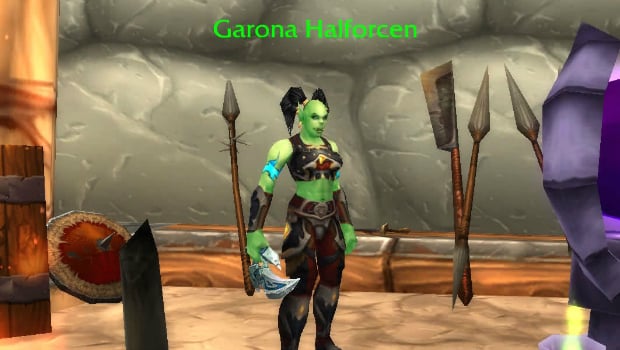 Let’s face it, no matter what else we do in-game, our sessions in WoW begin and end in our Garrisons. With patch 6.1, your home away from home gets a quite a number of upgrades. From new missions, to new followers to new fights and quests, your Draenor fort has a whole lot of new content in WoD‘s first major patch. Here are the highlights.

Three new named followers are being added to the game: Harrison Jones, Fen Tao and Garona Halforcen. Harrison Jones can be found in your Garrison and is recruited by completing the Don’t Call Me Junior achievement. He comes with the two new traits: Treasure Hunter and Mentor. The Treasure Hunter trait increases the gold payout from missions by 100%. Don’t get too excited, gold rewards from missions and base chance of success are being reduced to compensate for the new trait. On the upside, you can recruit followers from the Inn/Tavern with that trait specifically. The Mentor trait raises the level and iLvl of the other Followers on the mission to that of the Mentor and is unique to Harrison. Horde players can recruit Harrison as well. (Sorry, Belloc.)

Fen Tao is found right outside your town hall. Speak to him to recruit this monk follower. There were no unique Panderan followers, just the ones you could recruit out of the Inn. The addition of Fen allows you to utilize the Brew Aficionado trait you may have on other followers.

Garona is the reward from the next part of the Legendary question, starts at iLevel 630 and has the Master Assassin trait which greatly increases chance of success against all targets. Check with Khadgar (if that really is Khadgar, /tinfoilhat).

Followers can now be upgraded to iLvl 675 including those that are inactive or working. At the same time, Salvage is being altered to no longer reward follower item set tokens, just enhancement tokens. However, the Dwarven Bunker/War Mill will have a daily quest to exchange 25 Iron Horde Scraps for an item enhancement token.

A new vendor will appear in your Garrison selling follower items including trait reroll manuals, ability reroll manuals, and contracts to followers you may have missed when you were forced to choose between two or more, some for as little as 50 gold.

New exploration missions reward an item that opens up further missions. Dig site missions reward Draenor archaeology fragments and require the player to have at least 1 skill point in that profession. Treasure map missions also reward, you guessed it, archaeology treasure maps. You’ll need to complete many of these missions to complete the achievement that grants you Harrison Jones as a follower, so be on the lookout for them.

Another Harrison Jones tie-in, Relic Hunter quests reward many interesting rewards including a Seal of Tempered Fate. These come not from Harrison, but from an NPC that has a random chance of appearing in your Garrison to offer you a daily quest.

New Blackrock Foundry missions will start popping up if you have enough followers at iLvl 660. These raid missions include seven enemy threats to counter. Rewards include loot from Blackrock Foundry (up to iLevel 695!), Apexis Crystals (more important than ever with the new Apexis changes) and Primal Spirits.

If you have a level 3 profession building, you may get a profession specific mission that rewards Rush Orders. That item allows you to instantly finish 5 work orders in progress. Most Rush Orders are tied to a specific building, but one, the Rush Orders Ledger, can be used at any medium or large building in your Garrison.

There’s new ways to gain — and a lot of new ways spend — your Garrison resources. New daily dungeon missions will reward you 175 Garrison resources for killing the final boss and a random daily quest to kill a raid boss will also drop some resources into your stockpile. Nice try, Blizzard, but no amount of bribery is going to get me back into LFG dungeons. However you can blow your hard earned resources with wanton abandon on Follower retraining certificates, Rush Orders, an Apexis Crystal daily or a Bodyguard Miniaturization Device. Hey, at least a shrunken bodyguard won’t get in the way when you’re trying to click on things like they do.

Note that the Scavenger ability also received a nerf (from 200% reward increase to 100%) so no more stacking three Followers with Scavenger on one mission for a 900 resource reward. Yes, I’d done that a few times and it was beautiful.

Every day one of five new NPC’s will visit your Garrison and offer you a quest. These range from completing a dungeon to a raid to a profession task to the new Relic Hunter quests. Rewards include Follower item tokens, Apexis Crystals, Primal Spirits and more. Completing one of these daily quests has a chance to reward you with the ability to summon a world or raid boss to your garrison that will require 9-39 of your closest friends to complete.

Little tweaks have been made to make the Mission and Follower windows more informative, but nothing beats the Master Plan addon. You’ll thank me later. I promise.

Completing the Bringing the Bass quest in your Garrison will give you the ability to change the music played in your fort to one of the 40 different tunes including the amazing Lament of the Highborne. The catch? The music rolls come from many different sources including raid bosses, vendors, etc. On the bright side, there is an achievement for collecting at least 20 which rewards with a toy, the Portable Audiophone.

A new pet tamer will offer a quest that will grant you pet goodies which can include one of three pets. There’s also a quest item in your Garrison that will level any of your pets to 25 (with word that L100 players with L3 Garrisons will receive another one of those level up items in the mail.) Having one L25 pet will allow you to buy L25 pets on the Auction House. Which pet should you use the stone on? Our very own Anna Bell has a guide on just that very topic to help you choose.

Last But Not Least

The Miner’s Coffee aura can be stacked up to 5 times and the fireplace in your L2 & 3 Town Hall can now be used for Cooking. What can I say? It’s the little things that count.

This is by no means an exhaustive list of all the Garrison changes in 6.1 (check out the patch notes for a complete rundown). What is your favorite upgrade?