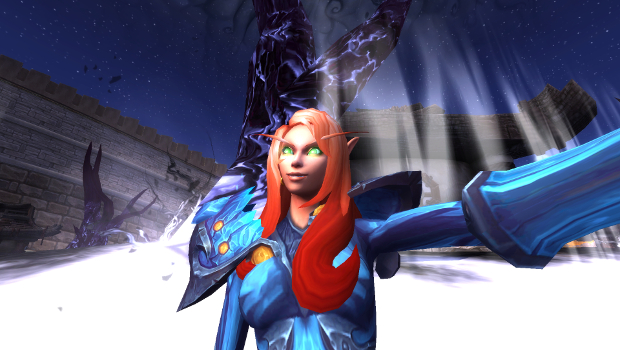 Posting yesterday’s Twitter adventure was a bit of a gamble — those who aren’t fans of social media tend to be extremely vocal about that fact — but most of you seemed to enjoy it. For that, I’m glad.

So I’ve been leveling my goblin mage with a friend for the last three days, and I always pictured my little guy as a pyromaniac so he’s been Fire since level 10.  And I’ve enjoyed it a lot and he’s gotten to Northrend now.  Still, I’ve noticed he’s doing really low DPS compared to other people in dungeons even while fully decked in heirlooms.  It doesn’t help that his casting speed is pretty slow (sometimes, when he doesn’t hit for two crits in a row).  I’m wondering how feasible it really is for him to stay Fire at max level?

Content below max level is rarely indicative of max level content. Fire, as I understand it, is plenty strong at level 100. What you tend to see in dungeons, though, is it’s all an AOE DPS race to kill everything as fast as possible. If you’re winding up long fireballs in a low level dungeon, one or two spellcasts on a single mob is all you’ll accomplish. Level 100 is different, especially when you start looking at LFR or other forms of raiding.

You need a minimum of 75 skill points in a profession to pick up the Darkmoon profession quests.

How hard is Target Turtle now for everyone?  Yes, it was way, way WAY to easy before, but now I had to go through 4 cycles of spending tokens to get the 3 rings on the turtle.  Not cool turtle, not cool at all.

I’ve heard from a whole ton of people that they’ve been having a hard time with it. I’m going to guess there’ll be a period where everyone needs to untrain their old habits. The people who’ve been doing it on a regular basis since its initial implementation have it down to muscle memory. Unconsciously, they’re probably trying the same methods they were using before, but that just won’t work now. Reader Pepe Stormstout offered this bit of advice: “The turtle is pretty easy once you get the hang of it; it starts in the middle, walks out a bit, stop for a sec, and then runs back into the middle. Basically, aim for the middle when he stops.”

The rogue columnist you had at the Site That Must Not Be Named was really good! What happened to him? What part of my soul do I need to sell to get him back writing for you guys?

We have him! You’ll see his first piece within days.

So broken led lightbulb. Vent the room then dispose in plastic bags, sounds about right?

I have no particular expertise in health and safety, so don’t take anything I say here as law … or even advice, really. As far as I know, there’s nothing dangerous about a broken LED. It isn’t like a fluorescent bulb which can release airborne mercury/general carcinogens if you smash it open. I don’t believe an LED contains any dangerous components (when unpowered) unless you try eating it. Don’t eat LEDs, kids.

It’s a more complex electronic device than old school light bulbs, though. Meaning it might be a good idea to find out where your city has a recycling/collection centers for electronics. Same kind of place that might collect batteries or old phones.

I didn’t see any announcements about Hearthstone from Pax East. Did I miss something?

Selfie/twitter intergration stuff seems a big part of 6.1 so why the missions to get it seem soo random and not account bound

The random aspect is a bit odd. I don’t think it’s a big deal that people don’t get their cameras immediately, but I feel bad for those who haven’t received one at all yet at this point. They probably should have guaranteed you get a shot at the camera right off the bat. And while the basic S.E.L.F.I.E. Camera isn’t account bound, it becomes a toy once you get the upgrade for the camera. Once it’s in your toy box, that does make it account bound.

Was Alex committing an abuse of authority by posting his selfies as a story?


Blizzard Watch is made possible by people like you.
Please consider supporting our Patreon!
Filed Under: Darkmoon-faire, Garrisons, Selfie-camera, Toybox, Toys
Advertisement