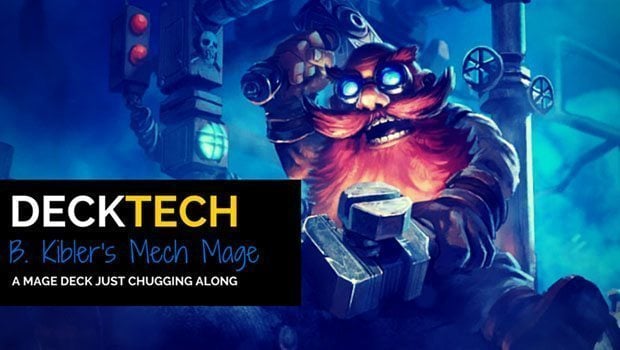 Hello! Hello! Hello! Anyone else find the Annoy-O-Tron super annoying when it comes into play? Grinds my gears, man!

Hope everyone enjoyed the previous look at the midrange paladin the other week. I’ve received great suggestions in the comments for different decks to look at including what the latest hunter iteration is. The Undertaker nerf has seen the systematic fall of hyper aggressive hunter decks and has paved the way for Mech Mage to be one of the new aggressive decks on the ladder.

The recent finals of the Hearthstone ESL Legendary Series saw 3 mage decks used by the 8 finalists. This particular list utilizes the Mad Scientist and Mirror Entity package popularized by Brian Kibler but it doesn’t have to be that way. We’ll look at the differences later on in the article.

The core of this deck revolves around 24+ cards but we can get to the swing cards at the end.

League of Explorers update: Gorilla Bot A-3 provides you with more Mech options. However, the deck is crowded with multiple 4 cost minions already. Try subbing out one Fireball and one Mechanical Yeti for the Gorilla Bot. The rest of the deck remains largely the same but now you’ll have extra Mechs to play with if the Battlecry successfully activates.

Update 10/9/15: This deck has risen back to the top in the post Grand Tournament world. While many of the elements have remained untouched, players are adding two copies of Fel Reaver. While the drawback is quite real, the fact that you can play this 8/8 monstrosity as early as turn 4 (or turn 3 with the coin) due to the Mechwarper means it needs to be dealt with immediately. Who cares if you lose out on 6 cards off your deck if your opponent is being pummelled for 8 damage a turn? You can swap out a Tinkertown Technician or the Mechanical Yeti for it.

Matches against your opponent matter in terms of figuring out what cards to keep and what cards to toss. A Snowchugger is a major annoyance against classes with weapons (including druids) since it shuts down their ability to mess with any of your minions on the board. Annoy-o-Tron should be kept against a hunter or warlock (if you’re suspecting a zoo build). Against the mage mirror, shamans, hunters, or priest decks, hold onto a Frostbolt to blast their opposing Mechwarper or Northshire Cleric.

If you happen to find yourself with a Mechwarper, don’t throw it away at all since it’s an essential part of your game plan. While in an ideal world you want the best possible hand, it isn’t always going to happen. Mulligan away cards that won’t help you give yourself a strong chance in the game.

Your early game is going to hinge around how well you deploy your Mechwarper and protect it. Don’t give in to your instinct of playing it out early and hoping it stays alive long enough for you to go off and get your minions into play. All it takes is one Lightning Bolt, Frostbolt, or Wrath for that game plan to be nixed. The rest of the time should be spent developing your side of the board. Class matchup suggestions are at the end of the column here for anything specific you should be aware of.

Don’t expect to see much of a gameplay difference at the midgame level. By now, your board should alive and pounding away. Don’t flood the board unless you’re absolutely certain your opponent has no board wipe spells remaining (Consecration, Lightning Storm, Hellfire, etc).

By this point, you’ll have wanted to deploy your Mad Scientist around this part of the game. If it manages to stick on the board, that’s great! You have a 2/2 body that’s disposable. In fact, you almost want it to die so it can fetch you your Mirror Entity. Deck thinning is a good thing since having a Mirror Entity in play means it saved you 3 mana from casting it and a turn from having to draw it. Wouldn’t you rather draw a Mechanical Yeti, a Goblin Blastmage, or a Loatheb instead of a measly Mirror Entity?

Pay close attention to when that Mirror Entity goes live though. Too early, and you end up with a cheap, disposable minions of no consequence like a Webspinner or a Haunted Creeper. Play it later in the game, and you might catch an Ironbark Protector, a Sylvanas Windrunner, or even your opponent’s Dr. Boom if the trap goes up just before turn 7!

Don’t completely discount the effectiveness of a late game Mechwarper as you can see an immediate return on investment. It could set you up for a Spider Tank that’s protected by an Annoy-O-Tron further slowing down your opponent.

Thankfully, you have a pair of solid options for use at the end game level. The obvious one is dropping Dr. Boom and letting him run wild. The rest of your spells can protect him long enough to do his damage. Speaking of spells, your second option is Archmage Antonidas himself. With all the spare parts you’ve accumulated, you can start dumping those and build yourself a nice collection of Fireballs that you can send straight at your opponent or to blow a hole in their board for your minions to walk through. For example, can help protect the Archmage for at least a turn. Ideally, a turn 8 or turn 9 Antonidas in play followed up with Spare Parts grants you a set of Fireballs to help really finish off your opponent. Shoot for a Finicky Cloakfield to protect the Archmage. 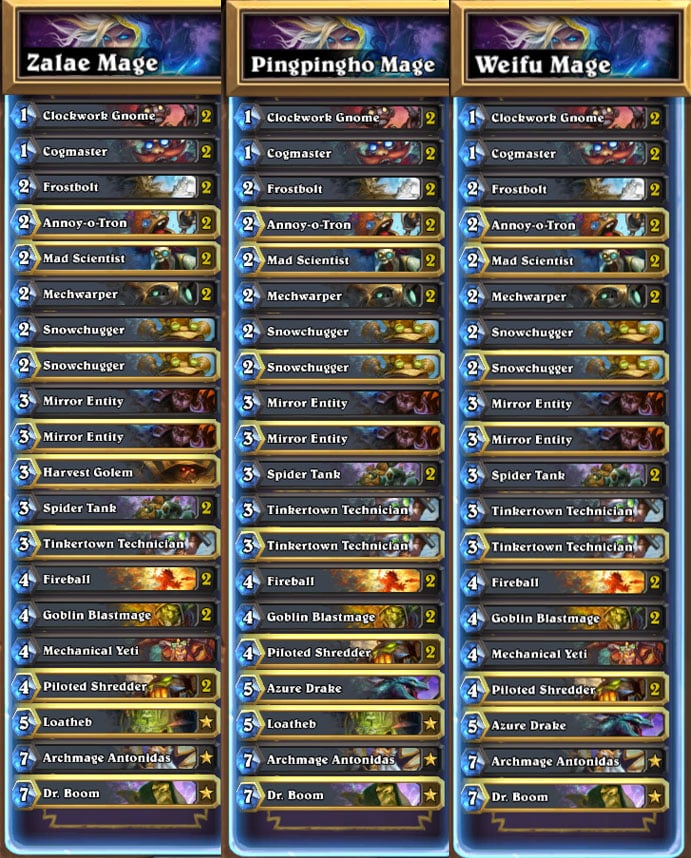 The 3 Mage Mech decks used in the Hearthstone ESL Legendary finals among the top 8.

There were 4 mage decks used in the ESL Hearthstone finals.

Only 3 of them were the Mech Mage variant.

Notice how there are around 26 cards that are shared among the lists. Zalae runs only one Tinkertown Technician and uses the second slot for a Harvest Golem opting for the extra stickiness and persistence. Pinpingho’s list substitutes an Azure Drake in lieu of the Mechanical Yeti for the extra card draw and the spellpower bonus. Weifu’s mage list doesn’t use Loatheb at all and keeps the Azure Drake. The list doesn’t offer much in the way of extra flexibility and the individual cards are tailored to provide a slight matchup advantage against certain classes and deck compositions.

If you don’t want to run the Mad Scientist and Mirror Entity package, you can toss in an Arcane Intellect, Flamestrike, and Unstable Portals. No access to Archmage Antonidas? You really need him to make the deck function otherwise you can try your luck with Ragnaros or a Pyroblast instead. Another option is to field Mana Wyrms in addition to your other 1-drops in the deck turning it into an even more aggressive early game deck. The spare parts you’ll accumulate throughout the game can help feed them and pump them up or be used to power Antonidas instead. I’ve seen another variation include a Flamestrike against the mirror matchup or as a tech card against other minion heavy deck matchups. The Black Knight is your obvious sideboard answer against decks that field taunts like Handlock or a Ramp Druid deck.

Druid: Ramp Druid can make your day hell in the late game. Try not to let it get there. A wrath against your early turn 2 Mechwarper means no Wild Growth or Innervate and slowing them down a turn.

Hunter: Do you like racing head to head? Because that’s what’s going to happen here against the face hunter. Dig for a Snowchugger fast to stall their Eaglehorn bows. Your Mirror Entity should be used around turn 5 or 6 to catch their Savannah Highmane.

Mage: Flamestrike ruins your day here. You’ll frequently encounter the Mech Mage mirror match up the most but may come across a freeze Mage here and there. You have to be able to recognize which version of the deck you’re playing against and play around it accordingly.

Paladin: The deck you’ll encounter here will be the variations of the midrange deck that was featured last week. The paladins early game isn’t the strongest so try to force an advantage here with their board clears. Snowchugger can help slow down their Truesilver Weapon. Try to hold Mirror Entity for Tirion Fordring. Be cautious of Silver Hand Recruits and consider sniping them away with your Hero Power.

Priest: This is a rough matchup as they’ll have to use their early removal against your minions. So many card components here should be scary. Auchenai Soulpriest and Circle of Healing? Yeowch! Mull and find yourself a Piloted Shredder so that it isn’t in the crosshairs of their Shadow Word: Pain or Shadow Word: Death.

Rogue: Oil rogue can give you some trouble here. Your Snowchugger will do wonders for you if you can both get it into play and protect it. Their Antique Healbot and Earthen Ring Farseer will try to buy them extra health so they can assemble the pieces to take you down. They can burst you for 20 damage in one turn! The primary combo consists of Southsea Deckhand, Hero Power, Tinker’s Sharpsword Oil, and Blade Flurry. A Deadly Posion added turns into 17 Damage while simultaneously dishing out 6 damage to everything on your side of the field which is the death knell.

Shaman: You know, at the time of writing this, I haven’t encountered as many shaman decks as I’d like. The one I saw the most was a Mech Shaman list. Lightning Storm, Hex, and Crackle can ruin your day here. You will lose to a Shaman if their side of the board is left unchecked.

Warlock: The Zoo Warlock deck should be straightforward as you just need to beat your opponent into submission before they can do the same to you. Handlock is a different story and given enough time, they can put the game out of reach. Use your minions to get their health low enough (Around 13 – 16 health) and your Fireballs and Frostbolts can help put the game away. Hellfire and Shadowflame will make you cry so don’t overextend too much.

Warrior: Argh! Control warrior! Nothing makes my blood boil more than copious amounts of armor with their health being in the single digits! Protect your Snowchugger and lock them down so that they can’t get their swings in with their weapons! Play smart with your trades. If it takes two cards (Cruel Taskmaster + Execute) to remove one of yours, you’re golden. Fiery War Axe ruins your day against Mechwarper. You’re on the clock here.

That’s it for this week’s deck tech! The March season is nearly here! Which deck will you pilot?