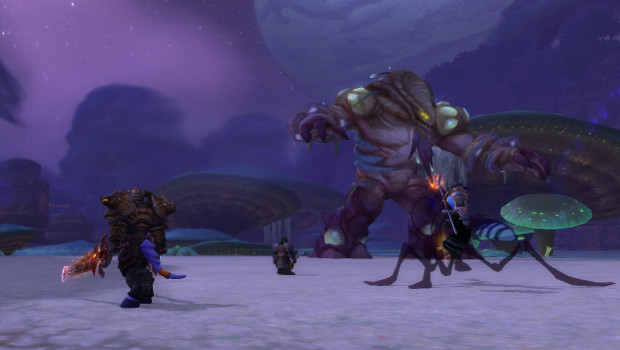 There’s an anecdote I like to tell about the first dungeon I ran at level 100. It was Shadowmoon Burial Grounds, and we’d gotten to Ner’zhul. Once we got to the end fight with the wall of skeletons, our DPS was all over the place and we failed to kill one and make a hole in time, and we all wiped. Then, we all ran back, resurrected, figured out what we did wrong and did it right the next time. No one called anyone else a name, no one pretended they were somehow special and always did everything right, and the dungeon was finished with minimal fuss. I tell this anecdote because, so far in Warlords of Draenor, it’s not unique to my experience.

This isn’t to say that I never run into jerks this expansion – I absolutely do. One of my Skyreach runs, another player began spewing epithets and berating the healer after a wipe on Rukhran. I started a vote kick, the reason I gave was player is verbally abusive and it immediately passed. It was telling. So far, while there are certainly still jerks and unpleasant players in Warlords, it feels like the community at large won’t put up with it nearly as much as before. It doesn’t seem to matter when I log on – be it the Upper Blackrock Spire run l did an hour ago or the Imperator LFR I did this morning, people seem (and again, I know this is anecdotal) to be pulling together and getting it done with minimal temper tantrums.

So I’m left wondering – why? What’s changed between now and say, Wrath of the Lich King or Cataclysm or even Mists of Pandaria, where my dungeon experiences were often awful? I don’t really know. I know that I generally am a lot less reluctant to run a dungeon now compared to then, even as a tank, a role I hate performing for groups of strangers. People listen when I explain things, for the most part. Maybe it’s the influx of returning players – people who’ve come back and are generally willing to accept that they don’t know everything and are willing to listen. Maybe it’s just an aberration, a streak of good luck I shouldn’t question or go into for fear of ruining it. I don’t know.

I do know that I hope it continues. At this rate, I’m actually getting my taste for chain dungeons, once my greatest pleasure in WoW, back again. It’s been a long time since I could sit down, queue up and run run run without getting tense and antsy at the thought of what new problem behavior I was going to run into. Would I get another racist tank? The healer who uses a DPS spec because It’s fine for a five man? The DPS player who doesn’t know how to wait for the rest of the group and who keeps running ahead into packs, then running them back onto the rest of the party while we’re still recovering from the previous pull? I haven’t seen any of those guys lately. And frankly, I sure don’t miss them.

Well, there was that one guy in Blackrock Foundry who kept /yelling PIE every time he pulled. But we cleared it, so I’m okay with that.

Blizzard Watch is made possible by people like you.
Please consider supporting our Patreon!
Filed Under: Civility, Dungeon, Raid, Warlords, WoW
Advertisement