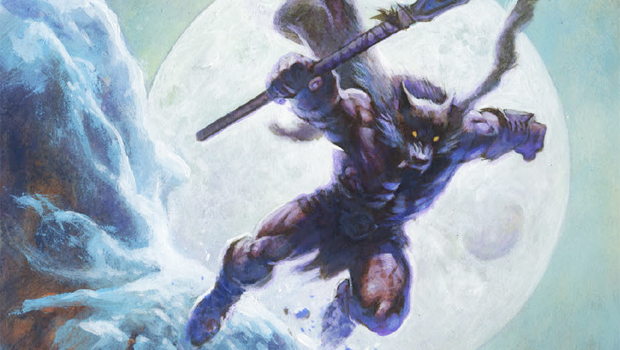 A new comic has just been released highlighting the Iron Wolf — a.k.a. Fenris, son of Garad and eldest brother of Durotan and Ga’nar. Blood and Thunder tells the story of Fenris’ double life of sorts, and the decisions and reasons that ultimately led him to the Thunderlord Clan. Written by Raphael Ahad, the comic is beautifully illustrated by Alex Horley. It’s interesting how this ties into Lords of War, in a way — the Durotan edition of Lords of War spoke very clearly about the perils of letting the bloodlust get the better part of you as a young Durotan fights off attacking wolves. Fenris, on the other hand, seems to have fully embraced this part of his being, even if it means turning away from the Frostwolves forever.

In addition to the comic, there’s a new lore entry for Fenris on the official site that further clarifies his position with the Thunderlords. It also delves into his decision to align with the Iron Horde. Although the Iron Wolf may be gone in game, both comic and lore entry help expand what little we know about Garad’s eldest son. And I’m a fan of comics in general, so I’m happy to see another digital edition released — and I kind of hope we see more of these offerings in the future. You can download the full comic through Blizzard’s website.

Blizzard Watch is made possible by people like you.
Please consider supporting our Patreon!
Filed Under: Durotan, Fenris, Garad, Iron Wolf, Thunderlord, Warlords Of Draenor
Advertisement