How to collect heirlooms in World of Warcraft 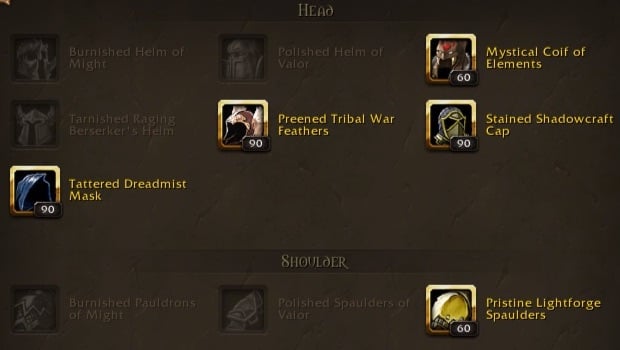 Whether this is your first character or your fiftieth, if you’re leveling a character in World of Warcraft, heirlooms are a key part of the experience. This isn’t to say that heirlooms are necessary for leveling — many of us have leveled without them through the years — but on the long road from level 1 to level 100, heirlooms can speed up the process significantly… and help you spend less time hunting for gear and more time playing the game. Who wouldn’t want that?

Primarily, the benefit of heirloom items is that many of them provide a boost to experience gained when wearing them, which means you’ll level up faster. However, that’s not their only benefit: unlike most in-game items which have a fixed item level, heirloom items level up with your character, growing more powerful as you grow more powerful (within certain limits). Initially, heirlooms cover the 1-60 range and will stop improving after that point — but you can upgrade your original heirlooms twice, once to level 90 and a second time to level 100, meaning you can gear up with heirlooms and stick with them until max level.

Still, even at those prices heirlooms are worth getting whether you’re a level 100 looking to level a new alt or just getting started. We’ll walk you through what heirlooms are, where to get them, and how you can work around the initial high pricetag. 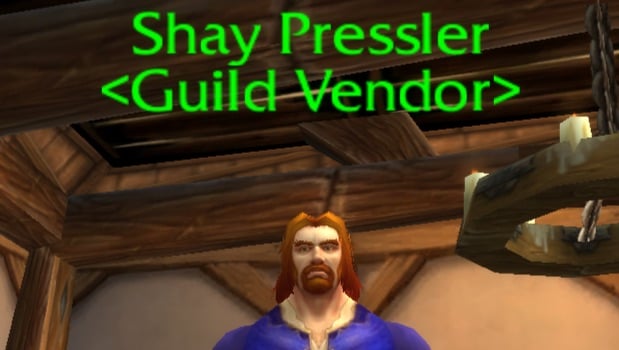 Where can I get heirlooms?

Heirlooms are now consolidated in a tab of the collections interface, alongside mounts, pets, and toys. If you’ve previously bought heirlooms on any character on your account, you’ll find them here — and if you want a heirloom on a new character, all you have to do is click on it in the heirloom tab to get a copy for yourself. This makes it a lot easier when you’re getting a new character started — they’ll have immediate access to all of your heirlooms, no matter what server they’re on or what faction they play as.

To pick up heirlooms of your own you’ll want to visit your heirloom vendor: that’s Estelle Gendry in Undercity for Horde or Krom Stoutarm in Ironforge for Alliance. Both of these vendors sell the same heirloom gear — including weapons, shields, off-hand items, shoulders, trinkets, necks, and chests — and items to upgrade your heirlooms to level 90 and level 100. However, a handful of heirloom items — helms, cloaks, and legs — are accessed through guild vendors, who can be found in most major cities. These items have additional guild requirements, too: cloaks and helms require you to have friendly guild reputation, while legs require you to have honored reputation (and the guild to have the Working Better as a Team achievement). Though these aren’t hurdles for large, established guilds, that can put them out of reach for new players. Just remember: you don’t have to buy these heirlooms on the character you’ll use them on. 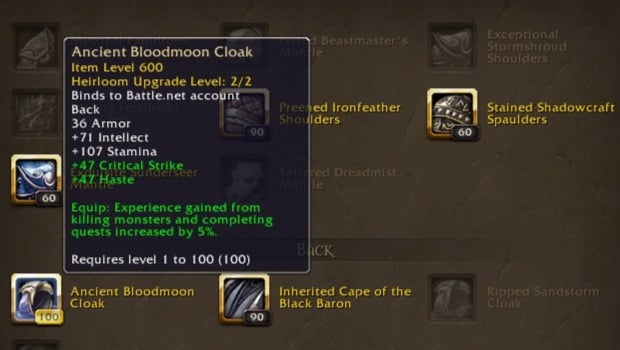 Alternate ways of getting (and upgrading) heirlooms

If you’re short on gold to complete your heirloom set, there are a few ways of getting heirlooms without spending a single coin. These aren’t necessarily easier ways, just instead of spending gold you’re spending time. Time that you could be using to earn gold. In the end, this is an alternate route that may help you get some heirlooms more quickly, but because of the time investment it’s probably not how you want to count on getting all of them — though your own preferences may vary.

You can also obtain shoulders, chests, and weapons from both the Darkmoon Faire (50 Darkmoon Prize Tickets for most items, 75 tickets for 2-handed weapons) and the Argent Tournament (25 Champion’s Seals for most items, 40 seals for 2-handed weapons). The Darkmoon route will be the easiest for new players, as you can start gaining tickets at any level — though only when the Faire is in town on during the first week of the month. The Argent Tournament requires you to do dailies for the level 80 Argent Tournament in Icecrown, which means it’s not an option for new characters, but if you have a character at or above level 80, the Tournament’s not a problem.

Upgrade-wise, level 100 characters can get several free upgrades by following the Mystery Notebook (A) / Mystery Notebook (H) quest chain from their garrison and running random heroic dungeons. After that, your upgrade options are more limited, but if you’re looking for upgrades during the right time of year, two holidays also offer them: Love Is in the Air will let you buy level 90 (200 Love Tokens) and level 100 (450 Love Tokens) weapon upgrades, while the Lunar Festival will let you buy level 90 (40 Coins of Ancestry) and level 100 (75 Coins of Ancestry) armor upgrades.

While all of these routes can get you heirlooms for a time rather than money investment, they all offer a number of other, more unique rewards that you might prefer to work towards. However, if you already have other things you want, heirloom upgrades can be a good reason to revisit these events or spend any existing currency you have. 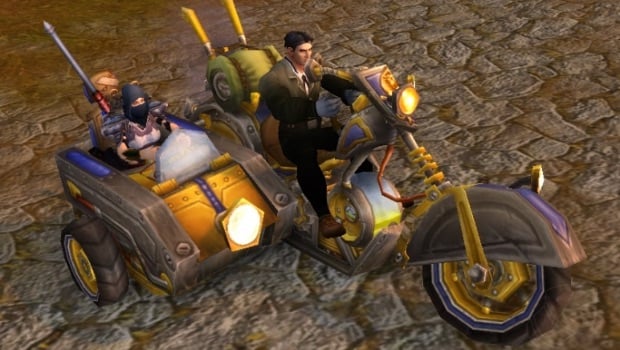 With patch 6.1, there are a handful of new heirloom-related achievements… but probably only one you really care about. They are:

When you reach the final heirloom achievement, you’ll get your own Chauffeured Chopper mount — which, as the name implies, is a motorcycle with a chauffeur to drive you around. You can use this +60% speed mount at any level, which makes it awfully handy for starting brand new characters.

Blizzard Watch is made possible by people like you.
Please consider supporting our Patreon!
Filed Under: Heirloom Collection, Heirlooms, How To Get Heirlooms, Wow Heirlooms, Wow Rookie
Advertisement