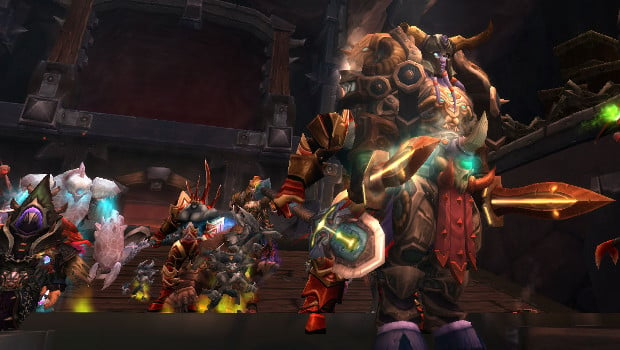 Okay, so while I’ve been working on leveling my alts, my main focus has been on raiding normal and heroic modes in Highmaul and Blackrock Foundry (and also garrisons, but there’s not much class specific to talk about there). Due to the luck of the drop, I’ve gotten my hands on two Blackrock Foundry one-handers, and so I’ve been raiding as Single-Minded Fury. My quick and dirty take on the sub-spec (you can’t really call it a spec, it’s not even a talent choice anymore, it’s just a weapon choice) are as follows:

Now that we’ve gone with the quick and dirty impressions, let’s talk about the spec in more detail. 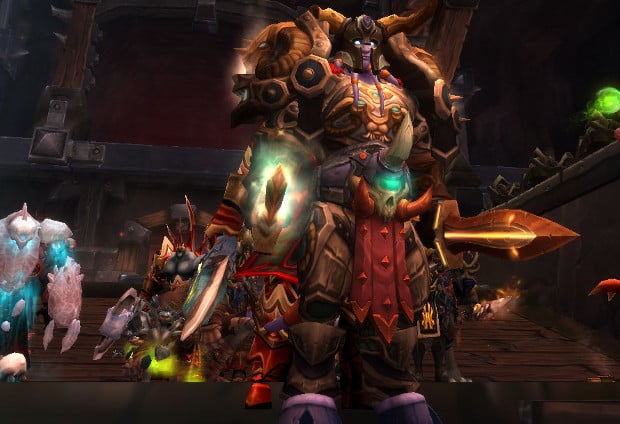 For starters, this is a heavily crit/mastery dependent spec. Fury in general still is — Bloodthirst crits still proc enrage, and mastery still buffs your enrage damage. Haste depends on talent choice — if you took Unquenchable Thirst, haste is almost useless, because you have no cooldown on Bloodthirst for haste to reduce and any other cooldown will be ameliorated by having a free BT available to throw off any time you’re waiting. With Raging Blow being proc dependent, Wild Strike having no noticeable cooldown (and you’ll only use it to bleed rage unless it’s discounted by Bloodthirst) and Execute also having no real cooldown, an Unquenchable Thirst SMF warrior has absolutely no need for haste, while a Sudden Death warrior will at least appreciate getting to throw off more Bloodthirsts with haste. Haste is still pretty terrible even for them — I’d definitely go with crit and mastery over haste — but it isn’t as useless as it is for UT SMF.

Versatility and multistrike feel less worthwhile than crit or mastery — I’d put them above haste, though. Haste really only affects autoattack speed (and not by much) and Bloodthirst cooldown if you don’t have UT. If you do, it just buffs autoattack.

I mentioned Bloodbath as my favorite 90 talent for single target, but that’s just a personal preference — I like getting to hit it more often. Avatar at the 1.5 minute mark is a fine talent and just as useful, with 20% increased damage. It definitely works for SMF.

One of the things I really like about SMF currently is how it is a get and spend spec — no burst windows aside from when you use your cooldowns to worry about. You get rage, you spend rage as abilities light up. Sudden Death makes Execute your big button, otherwise it’s Raging Blow or Whirlwind and then Raging Blow depending on targets.

Because 1h weapons tend to have faster swing speeds than 2h, rage generation is a lot smoother as SMF. I found a Sudden Death build easier to sustain as SMF than when I was playing TG, but my gear was sufficiently worse then. Single-Minded Fury suffers from the same banes the warrior class has always suffered from as DPS — breaking contact with a target for any reason, whether it’s to avoid damage, target switching, because the boss does something stupid like make a bunch of hands spawn that you have to DPS down (seriously, the original Kologarn wasn’t bad enough, we had to add giant grasping hands?) — anything that takes you away from a laser-like focus on your main target hurts both in terms of DPS and rage generation. If you’re not hitting anything, you’re not getting rage, you’re sure as heck not in an Enrage, and it puts you behind the curve. This has always been the warrior’s lot in fights — fights where we have to run on conveyor belts while slag plates and giant stampers come down on us are not fights where we can generate our resources or unleash them as effectively.

SMF really shines when it doesn’t have to do as much of that, or when there’s something like in Operator Thogor or Beastlord that makes up for it. Cleaving/AoEing is a strength of the sub-spec. I’d still like to get a couple of 2h weapons so I can test arms and TG out, see how they stack up, but I’m very happy with SMF on such fights. This is my AoE spec for SMF right now — yes, I even use Unquenchable Thirst here, so as to generate enough rage to sustain a few Whirlwinds in a row, which buffs how many targets Raging Blow hits. (I also glyph Raging Wind for the buff to Whirlwind damage.) 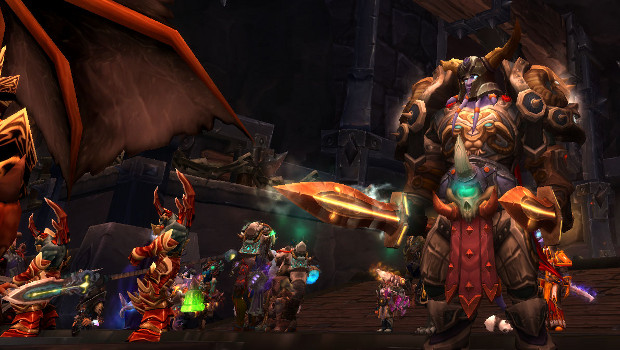 In the end the verdict is cautiously optimistic. I definitely feel like most of the simulations I’ve heard about are correct and TG is going to outpace SMF as I get geared — right now I’m about 550 and I’m starting to feel like I’m plateauing, in part because it’s hard to get crit in every slot. But the spec works, it’s raid viable, and it does good damage. I enjoy playing it, more than I’d expected to.

Blizzard Watch is made possible by people like you.
Please consider supporting our Patreon!
Filed Under: Single-Minded Fury, The Warriors’ Charge, Warrior, Warriors
Advertisement