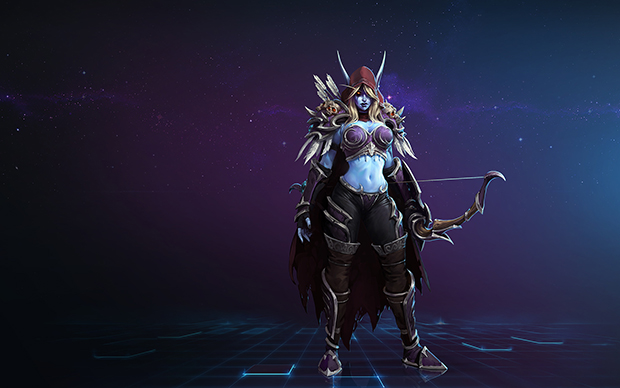 Heroes of the Storm Game Designer Matthew Cooper outlined a few of his thoughts on certain heroes that will be seeing upcoming changes in a future patch. Most of the insight is aimed at hero balance as opposed to map changes. More updates on Sylvanas can be found at the bottom of the post.

Matt: Our January 13 patch introduced a significant talent update to Abathur. As a result, we’ve seen his win percentage drop more than intended. With our next update, we plan to buff Abathur’s Heroic abilities as follows:

In some of the matches I’ve participated in throughout solo queue, I’ve come across team compositions that involved two healers. One would think that a team with two healers would be able to survive a little longer but wouldn’t have the damage output to challenge their opponents. A two support composition is extremely resilient in team battles and the developers are looking at slightly changing that up so that there are more pronounced drawbacks when doing that. Uther’s ultimate will be seeing a nerf due to how strong it it can be.

Originally Posted by Matthew Cooper
In the next patch we’re introducing a talent rework to Uther which includes functionality changes to his trait. Uther’s ghost will lose all of his base abilities, and now showcase a different heal on a lower cooldown. The role of that ghost will be to continue supporting your team with heals, after dying, rather than being the powerhouse it currently is.

Personally, I found it humorous when I was told to go die as Uther. Not because I was absolutely useless or anything, but because I was more effective since I couldn’t be crowd controlled and could be a pest at certain capture points to prevent the opposition from securing it.

Lastly, it looks like Stitches is going to be on deck for another set of nerfs. The developers have already targeted the Hook and Gorge combo but now they want to reduce the damage and tankiness level of the big abomination.

Originally Posted by Matthew Cooper
As we continue to evaluate Stitches and his role in Heroes of the Storm, we find that it’s incredibly important for us to identify what makes picking Stitches a different experience from choosing other Warriors. We feel the answer lies in his Hook. When thinking about additional changes, we’ll aim to make sure his Hook remains a strong and useful tool. Currently, we’re looking to reduce Stitches’ overall damage and tankiness.

The rest of the interview is rounded out with thoughts on Lost Vikings and Murky. There won’t be significant changes, but smaller tweaks are in the works.

In other news, with Sylvanas being announced at PAX East, we’ve all been wondering when she’d be playable:

Anyone else getting the feeling that next week is the new Soon(tm)?