The Queue: Stabbing everything 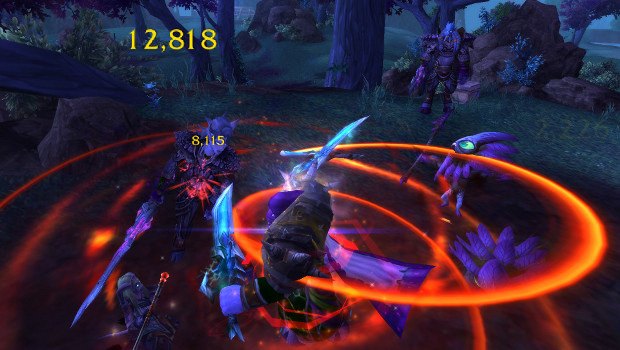 Look, if there’s something wrong with becoming a tornado of swording and slicey stabby killing everything around you, then I am proud to be wrong.

Let’s do the Queue folks.

Honest no guile Q4tQ: so who else absolutely loves the cinematic after you get to the completion of “foiling Blackhand” in Talador on the ships?  I mean Yrel … am I right?

As your fellow commenters would seem to bear out, I think most folks like Yrel quite a bit. The part where she heals Durotan seems to have slipped a few people’s minds – it was an unusually selfless act on her part, showing her commitment to defeating the true threat over cherishing vengeance. And the part where he threw her his axe and she almost decapitated Blackhand with it was a nice touch. Yrel’s very cool. Count me as a fan.

Do you think that any other classic, pre-Cata raids will get LFR-ized the way MC did for the 10-year anniversary? If so which ones? Ulduar? Karazhan?

That’s a tough one. So far we’ve seen Onyxia get brought up permanently for the 5th anniversary and MC get the temporary LFR treatment for the 10th. Since Naxxramas already got updated when Wrath came along, I don’t think we’d see it. Of the classic era raids, I’d most like to see Blackwing Lair get the LFR treatment – it’s a huge, sprawling raid dungeon and one I’m still very fond of. Besides that, Kara seems like a very popular choice – Kara and Ulduar are still among everyone’s favorite raids, it seems. (I like both, but neither are my favorite.)

Honestly, I wouldn’t mind seeing Throne of Thunder again. Yes, I know the bridge was awful. But I like the raid as a whole, it’s got personality.

QftQ: Now that we’re kinda sorta revisiting outland, what are the chances of seeing a re-tooled Karazhan raid, perhaps before the place was haunted and abandoned, when it existed in a more regal condition? I’m not sure how it would fit into the WoD story lore wise, but we’re going to need more raids at some point and a new version of Karazhan would be fantastic.

I was thinking the mini-zone it exists in (deadwind pass is it?) could get a facelift and exist as a new instanced zone, with a daily quest or two, or even a quest line leading up to the raid. A mix of new bosses and old favorites  as lore permits would be cool.

The problem is that Karazhan is on Azeroth.

So one of two things would have to happen. Either we’d have to go to our Karazhan, which isn’t really particularly connected to the events of this expansion (remember, we’re not just on another Draenor, we’re 30 or so years in the past on that Draenor, which has only briefly managed to invade our Azeroth before we pushed them back and blew up their Dark Portal) or someone would have to open a new portal to an Azeroth in the same time phase (ie, 30 or so years ago) as the Draenor we’re currently on.

Now, with Gul’dan being sneaky, it’s certainly possible he could be working with someone who has the means to open a portal to a Karazhan out there somewhere. I’m certainly not ruling it out. But I don’t think it’s very likely. The reason we went to Karazhan in BC is because an Eredar Lord was invading the tower to attempt to plunder Medivh’s secrets. Why would we be going there now?

I’d be less surprised if a revamped Karazhan showed up in future expansions than I would to see it at the end of this one, let me put it that way.

One thing that I’m still confused.

When complaining from a lack of things to do is that apart from raiding right? If your main activity in game is raiding are you already tired of BRF?

I seriously don’t think it is that old yet and I’m still enjoying it a lot while still making progress in it..

Since I don’t do much other then raiding I can’t judge the other areas but at least I don’t think we are that bad served in this front atm.

I can only answer your question as a guy who raids semi-casually (twice a week, just a DPS warrior, not leading raids or making calls or any of that), but for me I find the garrison an amazingly well designed piece of gameplay that I’m not always down for.

It’s a lot of work. There’s a feeling of doing one’s chores involved in sending the followers out, hitting all the professions options (and I don’t even do all of those, I just can’t) and otherwise keeping the place running. And that’s before I hit any dungeons or LFR or go to a raid or anything like that. I was really hoping that 6.1 would bring with it a new quest hub or some other form or new content I could do that wasn’t the same Apexis daily. The Garrison Campaign is well done, but it also comes in weekly installments, and sometimes I just want something new.

That’s my personal take on why 6.1 didn’t thrill me. It didn’t give me a new dungeon to run, a new quest hub, things I was hoping would come along and break up the routine. Yes, BRF still has that new raid smell. I’m not complaining about that.

That’s the Queue for today. See y’all tomorrow, I’ll be writing that one too.