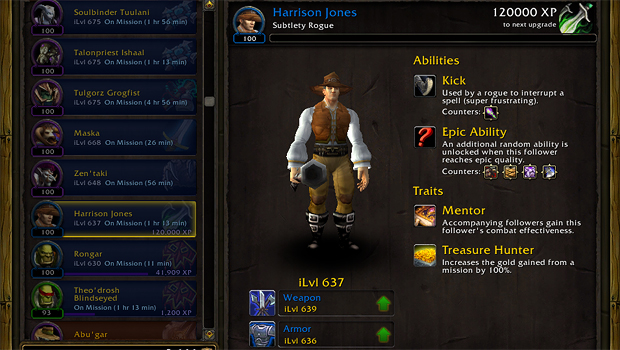 I’m not a huge fan of Harrison Jones. I liked him well enough in Wrath of the Lich King — he was a funny one-off gag. But then we had Cataclysm, and Uldum happened, and I really cannot forgive Harrison for taking up so much screen time that could have been devoted to the tol’vir, who were far, far more interesting. Really, when it comes down to a choice between formerly stone cat centaur Titan construct desert dudes guarding a device that could potentially destroy the planet and originate it anew, or a really long movie parody quest chain with far too many cut scenes, I’ll take the cat people any day. I mean, we could have had more stuff about Al’Akir and Skywall, guys. Instead we got goblin Hitler.

So when it came to light that Harrison Jones was going to be a potential garrison follower, I was incredibly happy, because what I really wanted to do was assign him to the mines. Forever. Go find me some artifacts, Jones. Take a few cut scenes to do it, I won’t mind. Watch out for rolling boulders and let me know how that works out for you. I finally finished all the requirements to get Harrison Jones as a follower today and he has shown up in my list of minions.

Now I could try re-rolling his traits until I got the mining trait, but he’s a Treasure Hunter. On top of being a Treasure Hunter, he has the Mentor trait, which means if I place him in a group with a level 92 follower, that follower will automatically dupe Harrison’s ilvl and act as another level 100. This means I can throw the low level Treasure Hunters that I’ve been dutifully recruiting from the Inn on pretty much any mission Harrison is capable of, and double dip on the Treasure Hunting goodness. In other words, he is just far too useful to throw away. Curse you, Jones! One day, you will outlive your usefulness. And when you do, the mines will be waiting. I promise.

Do you guys have garrison followers you just can’t get rid of, much as you like to? Do you have that one really useful follower who you’d like to put away forever, but they’re just too good to give up?