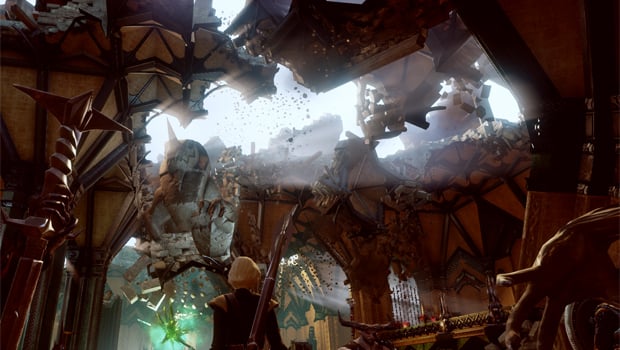 Welcome to the Queue, the daily Q&A column for all things Blizzard.

Earlier this week I was goofing around in Dragon Age: Inquisition and found a really neat set of ruins where everything was just … frozen in time. It was weird and kind of creepy. But it was also really visually striking, and I found myself thinking back to the Caverns of Time and how I’d like to see more stuff with it. It also made me wonder if bronze dragons have the capacity to simply halt time altogether — after all, we got a really cool sequence of time reversal in the Murozond encounter during Cataclysm. I’m sort of hoping we haven’t seen the last of the Infinite or the bronze dragonflight, because both concepts are just too interesting to pass up.

Also, I did in fact fix the whole frozen temple thing and everything promptly collapsed. I’m still a little sad about that one.

Why does story pacing in patches seem so hard to get correct?

I think it’s a combination of factors, but the biggest is simply this: You never really know how long a patch is going to last. You don’t, I don’t, and the people working on the patches and upcoming content don’t, either. They very likely have some kind of projected schedule of how long it’s supposed to theoretically take for something new to come out. But that projected schedule might not account for how long it takes to test something, how long it takes to fix any bugs that happen to pop up, or the time involved in coming up with a solution if something that was supposed to work right out the gate does not, in fact, work and has to be scrapped.

It also doesn’t take into account how long it will take people to play through the content as it’s introduced. We’re as much of a wild card as the bugs or issues that pop up while things are being produced. It is really, really difficult to keep a fluid story in motion in a game like this, and to kind of try to pinpoint that nebulous area of time in which people get frustrated with a lack of story. You don’t want to move too fast, and you don’t want to move slow. It’s a ridiculously complicated balancing act to try and keep up with.

Chances of aspect re-empowerment? Especially with regards to Murozond confirmed to be from our Nozdormu?

It’s highly doubtful. We’re in the Age of Mortals now. The Aspects were charged with those powers in order to keep the Hour of Twilight from coming to pass. They succeeded in that mission, but it took all of the power they had to accomplish it — and that was exactly according to plan. Whatever weird stretch of destiny Azeroth and its denizens are progressing towards, the powering down of the Aspects and our rise to supposed power were both planned and expected to happen. It would take us messing up in a major, major way for the Aspects to suddenly come into power again — or need to come into power again. Like it or not, it’s our show to run, now.

With the new season of Diablo next week I was curious, do you have seasonal character or do you just stick with normal mode?

My preferred method of playing Diablo 3 doesn’t really involve seasons or anything at all. I just log on every now and again when the idea of smushing a lot of demons in quick succession sounds really appealing. I don’t really care about levels or gear so much as making things go squish. I am definitely not what you would call a serious or avid player, I enjoy the game on a pretty casual, every now and again level. We do have staff that play way, way more actively than I do, however.

If you’re talking about Stitches the abomination in Duskwood, yes. Well, honestly that’s true of any abomination in general. Abominations are made by piecing together parts from corpses. Those corpses were once people, so … yeah. Abominations are kind of gross when you sit down and really think about it. It’s not quite as bad as Thaddius in Naxxramas, though — it was constructed with the bodies of dead women and children, and you can hear their screams and cries throughout Naxxramas until Thaddius is dead. It’s been stated that the souls of the dead are fused within the construct along with the flesh used to create it, and that’s gross on another level altogether.

Do you think they will ever make Warcraft II playable for modern PCs and available on the Blizz Store?

I certainly hope so! What I’d absolutely love to see is a revamp of all three of the original RTS titles, released to PC and tablets. A tablet version would be fantastic. It would require a heck of a lot of work, I imagine, but I’d love to see them updated to StarCraft II style graphics, with new cinematics and everything.

what flows better if levelling an alt, through kalimdor or eastern kingdoms? Only thing levelled since cata was in dungeons

Both are absolutely fine now, honestly. The Cataclysm revamp really re-worked the flow of zones so that you’re never really being sent on a path that doesn’t feel natural. You do tend to level up fairly quickly these days though, and you might find yourself moving from one zone to another before you’ve finished the first one. I’m kind of a completionist that prefers finishing a zone in its entirety before moving on, but that’s me. If you really like the new stories that were introduced with Cataclysm (and some of them are really, really good), take your time and clear the zone before moving on. If you’re not so concerned about lore or story, you’ll find yourself moving at a pretty brisk pace no matter which continent you start out on.

That’s it for Sunday’s edition of the Queue — be sure to leave plenty of questions for tomorrow’s edition in the comments!