Breakfast Topic: Do you miss scenarios? 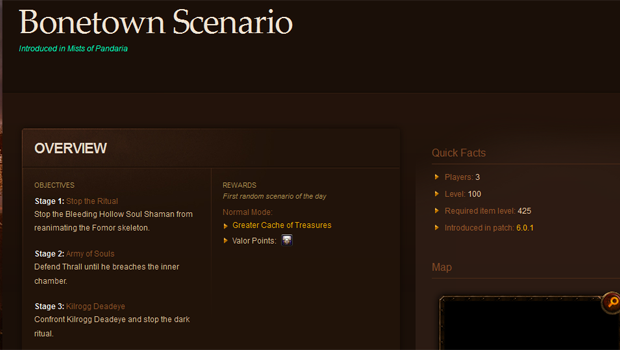 I miss scenarios. I miss them a lot. Introduced in Mists of Pandaria, scenarios were nice little chunks of content that could be run with three people — and you didn’t need to fill any particular roles to complete them. For DPS players like myself, this meant content with relatively fast queue times, and rewards that may not have been the best in the world, but served their purpose well enough. It was a fast way to get Valor or Justice points without having to carve out time in my schedule for waiting as well as actually doing the content.

LFR so far for me in Warlords of Draenor has meant that I’ll be sitting in a queue for at least a half hour before actually getting to participate in the content I’d like to play. The funny part is that this isn’t exactly new — even before the dungeon queueing system was introduced in Wrath, you still had to wait to go to a dungeon. The difference between the two, however, is that pre-Dungeon Finder, you were actively looking for someone to fill that final spot in your group.

Now, you don’t do anything really, you simply wait for the system to do it for you, and that absence of activity in between deciding to put a group together and the system actually finding a group that suits you makes the wait stand out far more than it did when you were actively bugging your friends, posting in trade chat or otherwise occupying yourself with finding a fifth for your party. In Mists, scenarios actually filled that empty space — you could queue for and complete the scenario while you waited, and time flew by. We’re missing that now, and it’s making the idea of queueing for anything less and less appealing.

What do you guys think? Do you miss scenarios? Did you run them in Mists of Pandaria? Did you think they were a good source of content, or are you fine with no scenarios at all?

Blizzard Watch is made possible by people like you.
Please consider supporting our Patreon!
Filed Under: Content, Mists Of Pandaria, Quest Scenario, Scenarios, Solo Scenario, Warlords Of Draenor
Advertisement