The Queue: Tyrande must rampage 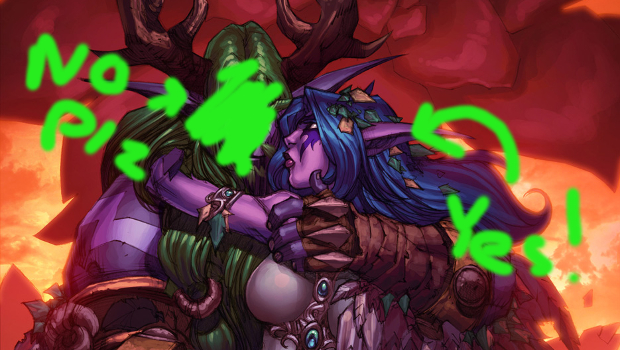 Today’s header image is why I ask other people to do my photo editing work.

Have you upgraded all your 100s’ herb gardens and mines to level 3? I only upgraded my  main’s, the rest are still sitting happily at lv1.

Do you support the idea of a Warcraft 4 after Legacy of the Void!

I doubt they’ll do it, but I wouldn’t mind if they did. I have no strong feelings in either direction. I liked the Warcraft RTS games, but Warcraft has kind of moved beyond that. Its story, for better or worse, is playing out in the wildly popular and successful MMO. Should that story be moved back to an RTS while the MMO is still active? Probably not. Would I play a new Warcraft RTS, though? Probably.

do you think the whole rng system needs to just go die in a fire? Chasing things for years that dont drop just isn’t fun.

The RNG system doesn’t necessarily need to die in a fire. The RNG system needs to not be 100% RNG. For example, if every boss gave you a small number of Apexis Crystals (or Valor Points!) which you could use on a vendor that has every possible drop for your class. If you get the drop you want after only a few boss kills, that’s awesome! Doesn’t cost you anything! If you still haven’t received that drop after X number of kills, that’s okay — you’ve earned the amount of currency that item costs from the vendor.

Getting the drop you want becomes a celebration. If you don’t get it, that’s alright. You put in the work to get it anyway.

how do you feel about Blizzard putting big lore moments in legendary quest lines, more so the older quests than newer

Nowadays when you can do the legendary questline even if you aren’t a hardcore raider, I’m fine with it. It isn’t accessible to everyone, but it’s accessible to a majority. That’s significantly better than back when huge lore moments were only seen by high-end Heroic raiders … which has still happened with Mythic Highmaul and that’s a load of crap.

The legendary questlines, though? I think those are alright.

Did you watch Heroes of the Dorm?

Sadly, no! I wanted to, but I had a pretty busy week(end). Heroes of the Dorm was also competing with Daredevil for my free time. Marvel has me on the end of a hook, and no matter how much I fight it, they reel me in every single time.

Are there any particular garrison followers that you like personality-wise?

I feel that very few garrison followers have personalities. Most of them are given canned or randomized lines. Of those that do have stories, though? Shelly Hamby is my favorite. Not only does she have a compelling vengeance backstory, but she’s a rogue — and I’m a sucker for human female rogues. I find them super cool. That’s why I’m disappointed that, as far as I can tell, there are no SI:7 followers. I’m a big geek for the military groups within the Alliance. I love working with SI:7 and interacting with members of SI:7. They’re out in full force on Draenor, you can find their operatives in nearly every zone, so I was hoping some would sign on as followers.

We get plenty of rangari, though. The rangari are cool. The little argument between one of the rangari and a member of SI:7 in Nagrand is probably one of my favorite things in Warlords.

Which faction leader of the Alliance do you feel needs more attention in terms of character development?

Tyrande without Malfurion or Varian crawling up her butt. And not only Tyrande, but the aspect of the Night Elves she represents. In Warcraft 3, Tyrande’s side of the Night Elf story was highly militarized, full of soldiers putting up a vicious defense of their lands. Sentinels, rangers, Shandris Feathermoon, bloodthirsty fighting and do-what-we-must to fend off invaders whether they be orcs, Scourge, or the Burning Legion. Her faction presented Elune, her tenets, and her power.

I feel that World of Warcraft stripped away that aspect of the Night Elves, leaving them only with the love-and-peace flavors of druidism and sometimes a lady blessing a moonwell or something. The military aspect of their society is completely gone from the story. Not only is it gone, but it seems like they’ve been transformed into being wholly incompetent when it comes to their military. All they’ve done for years is get stomped by orcs. Tyrande is 100% uninvolved unless she’s there to blunder something and make Malfurion or Varian look better in comparison. Her character has been gutted.

Give me those vicious elven sentinels, huntresses, wardens — give me the night elves leading an offensive with Tyrande leading the charge. Give me the bloodthirsty badasses of Warcraft 3, not just the druids making out with bearded trees.

Blizzard Watch is made possible by people like you.
Please consider supporting our Patreon!
Filed Under: Malfurion, Rangari, Si:7, Tyrande
Advertisement