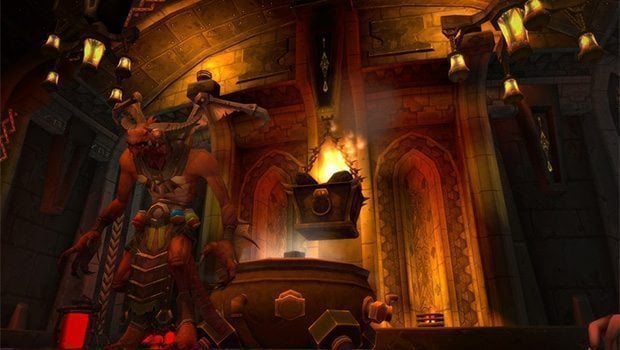 Welcome to the Hidden Laboratory, the final wing of Hearthstone’s Blackrock Mountain adventure. Here you’ll get a second crack at Nefarian in his true form after battling through his other minions and creations.

In addition, you’ll gain the last class challenge card. Poor Paladins get their final class challenge last. However, it’s a decent one,  Solemn Vigil allows the Paladin the potential to draw 2 cards for free.

You can actually time out the when the ‘tron cards are going to hit the field. Arcanotron hits the board immediately. Toxitron arrives 2 turns later, followed by Electron another 2 turns after that. Magmatron then enters the fray after 2 more turns. Based on this, you can develop a strategy to neutralize and counteract the ‘trons.

I ended up using one of my ladder Paladin decks against Arcanotron. Early game isn’t going to do much but once you hit turn 8, he’ll drop non-stop Magmatrons which will be immensely annoying. Your Lay on Hands and Antique Healbots will help counteract the damage capabilities of the Magmatron and buy you more time, if needed. Keep whittling away at the ‘trons and going straight for the defense system and there won’t be much of a system left for it to defend.

I tried using a Druid deck revolving around Gadgetzan Auctioneer and cheap spells, but I just couldn’t find the combo pieces at the right time. A more consistent Mage version of the deck ended up finding success. Try to hold out until turn 6. Electron will enter play and many of your mage spells will become free due to Electron’s ability of reducing all spells by (3). Rely on Frost Nova and Cone of Cold to keep stalling. Eventually, you’ll draw into a Gadgetzan Auctioneer that enables you to power through and draw out the rest of your deck. Once you draw Archmage Antonidas and put him into play, you’ll be in position to wield cheap, near-infinite Fireballs on the same turn. Protect your Sorcerer’s Apprentices and Gadgetzan Auctioneers though. Keep Electron alive, otherwise you’ll end up without the capabilities of free spells.

Volcanic Drake’s strength lies in the scaling cost mechanic. Namely, the more minions that die, the faster the drake can be put into play. Without that it comes in at a standard 6 mana for a 6/4 drake with no other real special abilities. The earlier it comes out, the better an impact it can make. Otherwise, there are better minions to play in the 6 mana cost and higher range.

Maloriak likes experimenting with chemicals and potions. In this case, one of his powers involves a passive that switches the attack and health of minions. Keep an eye out and add minions that have a little extra health to create an offensive power house. Deathlords perhaps?

I found Maloriak to be one of the easier heroic encounters. It felt as if his hero power was buggy from time to time. Minions he played received the attack buff but their health did not increase. A double dose of Kezan Mystics can help keep Maloriak’s secrets under control. Kel’thuzad will also serve you well here. You can sacrifice your minions and demons into Maloriak’s side of the board and rest easy knowing they’ll be back at the end of your turn. His hero power passive might work in your favor as it increases the attack of some of your minions like the Annoy-o-Tron, Voidcaller, and Voidwalker.

Defeating Maloriak yields yet another dragon mechanic card. If you’re holding a dragon in your hand, Blackwing Corruptor functions as a Frostbolt with a 5/4 body attached to it. The thing to keep in mind is that you’re conveying information to your opponent when you play this. If the Battlecry triggers, your opponent will know to expect a dragon. It could be an Alexstrasza or a little Faerie Dragon. If it doesn’t trigger, then they can breathe easier knowing you have no potential heavy hitters coming out.

Whatever deck you choose, stock it with Acidic Swamp Oozes and a Harrison Jones if you have one. Atramedes can equip a weapon which essentially increases in attack based on the number of cards you play. Lean towards an efficient deck with creatures of value that can trade for multiple minions.

You do start out with 3 Reverberating Gongs in your hand to help remove his weapon. I ended up using Combo Druid against him in this mode and wrapped things up swiftly by luckily drawing into my combo pieces. Taunt minions will allow you to soak up some of the damage from his weapon. Time your gongs and use them after a sufficient build up in his weapon’s attack — like when it hits 5 or higher. For good measure, stock up on those extra Oozes.

On heroic mode, Atramedes starts out with armor and you don’t get any Reverberating Gongs to help you out. Oozes and a Harrison Jones are almost a must here. Tried and true Priest decks will be the order of the day against this particular blind dragon. Deathlords, Sen’jin Shieldmastas, and Sludge Belchers will help soak his weapon attacks and buy you some time to properly set up. Lightwells come in handy here. Keep buffing up the health of your minions and activate your Inner Fire on a well-buffed Lightwell (or equivalent) before taking it to Atramedes.

It’s Nefarian, take two! This time he won’t be alone. The moment you shear off Nefarian’s armor, his portrait will fly up in the air and Onyxia will take his place. She has 30 health on heroic. Nefarian will periodically launch his own set of fireballs upon your side of the board.

Keep your minions above 4 health. Flamestrikes and Tail Swipes can ruin your day. Smites can help control his Bone Constructs early on in the game until you gain board advantage. Try to mulligan hard for a Lightwell in your opening hand. Think twice before sending in your Lightwell offensively to clear out his minions. Save your Holy Novas until he has a sizeable number of Bone Constructs in play so you can get maximum value out of it. Your ultimate strategy is to drop him to 30 health with 1 armor. Yep, we’re going for the 1-shot strategy. Get your Deathlords or Lightwells out and keep gradually buffing away at them and making them huge. You need to give a minion the ability to hit 31 or more damage in a turn. Power Word: Shields, Divine Spirits, and Velen’s Chosens are some of the ways you can make that happen.

Dragonkin Sorcerer is the last neutral card available from Nefarian. Not exactly a fan of him as well — it takes both time and spells to increase the Sorcerer’s potency. Not only that, but he can potentially fall prey to a well-placed Hex or a Polymorph. If you’re a priest, you could conceivably load it up with buff spells which tie right in with his ability. But the moment a crowd control card lands, all that investment goes up in flames, wasted.

The last legendary card available from this adventure mode is Nefarian himself. Bit of a random element here as ol’ Nef will randomly generate a class card in your hand based on what class your opponent is playing. You can see the potential and the downsides here. You’re getting extra cards as a resource which is good. But the potential of that card hinges on the class you’re playing against. He’s almost like a Ysera in that sense.

That’s it for Blackwing Lair — you can catch the previous bosses from the earlier wings on YouTube! What do you think of the adventure mode? Where else would you like to visit next?