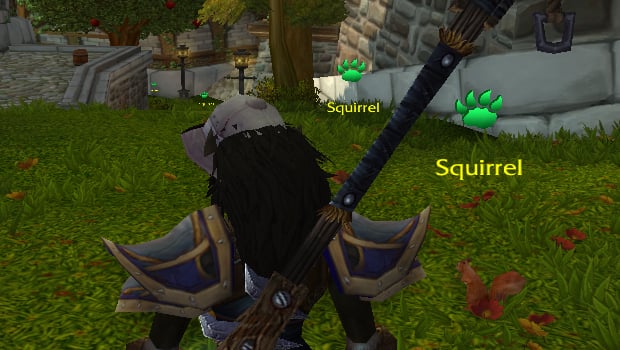 We’ve been hopping around quite a bit from article to article in terms of difficulty and what knowledge a battler needs to have. This week, we’re jumping way ahead to one of the most esoteric bits of battle pet data out there: breeds.

This is absolutely not information a beginner needs to stress about, so don’t get too overwhelmed if you’re still learning the basics. At its core, battle pet breeds are just a shorthand way for tamers to describe what stats a specific pet has. If you’re just starting out, whether your pet is slightly faster or hits just a bit harder isn’t going to matter quite as much, but in more difficult encounters, knowing how fast or healthy your pet is in relation to other pets of the same type can make or break a fight. If you’ve ever read a strategy and been unable to replicate it even though all the commentary is about how well it works, mismatched breeds might be the culprit.

There are ten different breeds of pets. Each one is a combination of two out of four different stats. These are the three main pet stats–Health, Power and Speed–plus an additional stat called ‘Balanced’, which adds to all 3 stats. A typical breed’s shorthand might be P/S, which would add Power and Speed to a pet’s base stats, or H/H, which adds double the health. For simplicity’s sake (and hopefully to make the whole shebang easier to understand) I’ll use the letter shorthand, not the numbers. The number shorthand just assigns a number to a letter combo: 3 is the same as B/B, for instance. The number shorthand goes from 3-12, and is doubled from 13-22. 3 and 13 (etc) both refer to B/B. The higher numbers denote female pets and the lower ones are males, which has absolutely no use to the player at this time. So, letter shorthand it is! 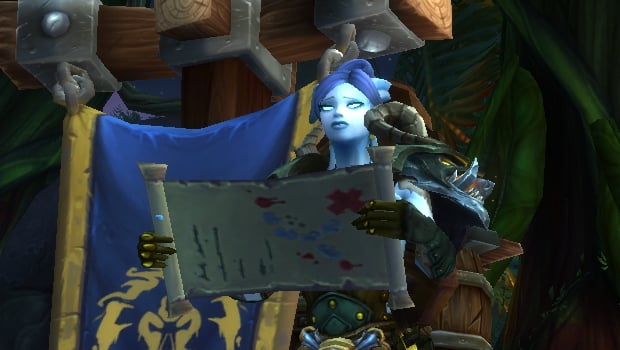 Also, maybe because there are enough numbers here already.

All pets of the same name have identical base stats. This means all Silkbead Snails have the same base stats, for example. This doesn’t include all pets a newbie might call ‘the same’. Emperor Crabs as a whole have more Power in their base stats than any other crabs, for instance, so if you compare an Emperor Crab and a Shore Crab with the same breed & rarity, the Emperor will have slightly more Power. This also means that any pet with the same name, rarity and breed has identical stats. All rare P/P Emperor Crabs have 358 Power, so you know exactly what you’re getting when you use that shorthand. The reason ‘and rarity’ keeps coming up is that all rarity does for a pet is add a bigger multiplier to its stats.

Note that not all pets have all ten breeds available. Those Emperor Crabs only come in P/P and H/H, while the Shore Crab has H/H, H/P & B/B up for grabs. This means that, even beyond baseline stats sometimes you’re going to have to be precise in picking which pets you pursue in the first place.

The default pet UI doesn’t include any breed information. There are a few addons available to feed you this info (a couple of my favorites are in the addon post from a bit back), but if you’re addon averse, you can also figure it out manually by using Wowhead. Even with the addons, I still use Wowhead’s stellar tools to decide which breed I think would be optimal for my purposes before i get there. Use the level slider and quality buttons to match up with the pet you tamed, then sift through the different available breeds until you find one with stats that matches the one you have. 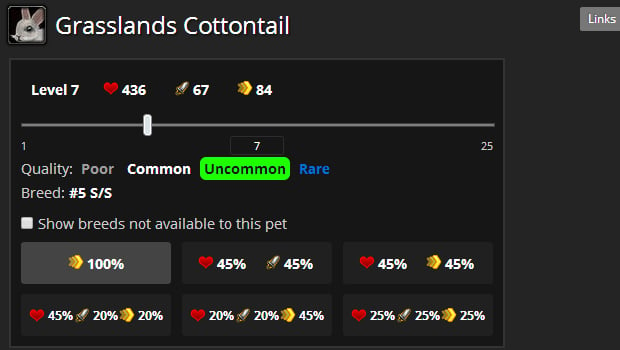 Let’s say you tamed an uncommon Grasslands Cottontail at level 7. If it has 436 HP, 67 Power and 84 Speed? Congratulations, you’ve got yourself an S/S!

This leads us into why this can be important to the later stages of the game. When you start battling as a newbie, it’s all about grinding. As you get further into the PVE endgame, pet battling becomes more like solving a puzzle. Rabbits in particular are a bit fussy to battle with, because whether you go first or second every round will greatly affect how well you perform. If a pet activates the skill Dodge, they effectively get two turns of dodging, because the ‘one turn’ stipulation in the tooltip doesn’t begin until the next round starts. If your rabbit is faster, they can activate Dodge before the opponent can act, and then use the next turn to deal a little damage. If your rabbit is slower, you only get that single ‘next’ turn worth of dodge. With Burrow and Dodge and a rabbit you can guarantee is S/S breed fast, you only have to worry about taking damage from non-DOT spells three turns in a row, making it an annoying opponent to have.

In PVE breeds don’t matter as much per se. You can just look at your opponent’s straight up numbers and decide that you need something faster than its speed, so anything with a higher bare speed stat than that will work. Because PVP teams are built while not knowing what your opponent is bringing to the table, dealing in absolutes (the hardest hitting, the fastest, the slowest) while packing a good synergy strat is going to be the way to build your team.

So, if you have a pick of multiple pets, which breed is the best? 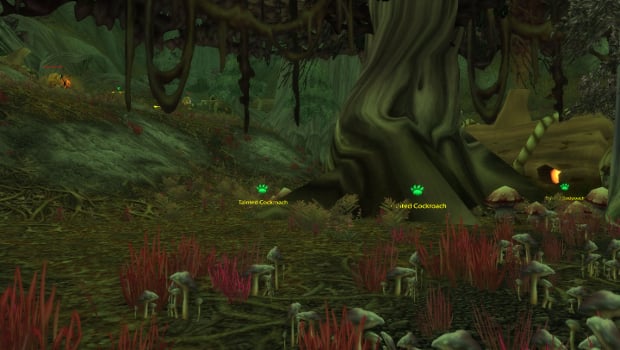 It depends on what you’re trying to do with whatever pet you’ve got. One oddity to note is that ‘pure’ breeds (H/H, P/P and S/S) get more points total invested. B/B has the lowest amount, with the three X/B breeds getting slightly more and mixtures of the pure breeds more still. This means that, if possible, you’re going to shoot for pure breeds for the task at hand.

In general, I tend to default to P/P for PVE. When in doubt, hitting harder tends to be a good thing. Power also increases the amount of healing done and shields are better, making it a better choice for most turtle teams as well. P/S is my favored hybrid breed for the same reason. I usually prefer speedier pets in PVP, even without a specific strategy, because you’re essentially buying an extra turn by going first. I don’t usually want H/H unless my pet has an attack or heal based on a percentage of my health.

Similarly, there are certain pets you may not want to be fast. The Undead family ability, which grants one turn of free resurrection, is better on slower pets. Like dodge, it begins counting on the next turn, but most of the time if your pet is faster, it’s killed at the very end of the round. If your Undead pet is slower, it pops up immediately after it’s killed and performs the attack you queued for it that turn, and then the next turn is your resurrected round. So you have to go on a pet-by-pet, encounter-by-encounter basis. Sorry.

Breeds are not an easy concept, and it’s one a lot of tamers skip altogether. If you’d like to just throw it out the window, even after I went through all this trouble to explain it, I won’t judge you. But it’s a good thing to keep in your back pocket for when you’ve got bosses to kill and pets to tame.