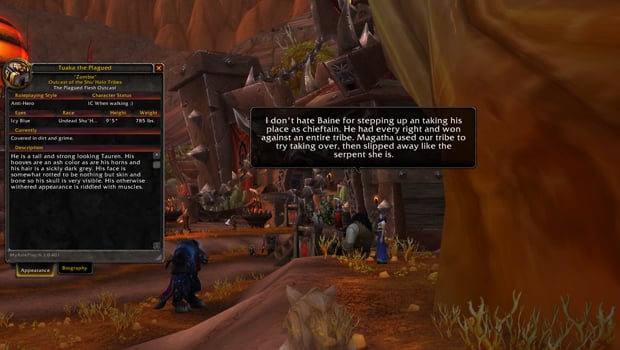 If you’ve got your character set and you’re ready to begin roleplaying in game, you might want to take a moment to look for roleplaying addons. While you wouldn’t think addons would be a requirement of roleplaying, of all things, there are actually several options out there that serve as incredibly useful tools. Some help with the actual roleplay process, while others help you identify exactly who is open for roleplay, and allow you to put a little bit of information out there to let people know that you’re open to roleplay as well. And others will let you create custom items and objects that you can tailor specifically for whatever roleplay you have in mind.

Note that none of these roleplaying addons are actually required — if you simply want to hop in the game and start talking to people, that’s perfectly fine as well. But these definitely make it easier to establish that first point of contact, and let people know a little bit about your character before you even say hello. 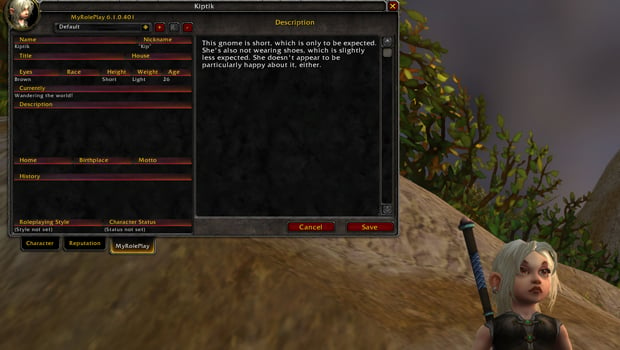 These are some of the top roleplaying addons used by roleplayers, and although there are several different options to choose from, for the most part, they work together. What do they do? They’re profile addons. Basically what these addons do is add a new window to your interface that will allow you to fill in your character details — age, appearance, character history. It will then give other players who have that addon the ability to read your profile, and give you the ability to read theirs when you mouse over their name or target them. Although not all roleplayers use these particular roleplaying addons, it’s still a great way to tell at a glance who is definitely a roleplayer, and who may or may not be interested.

For simplicity, MyRoleplay and XRP both offer a fairly bare bones interface that is easy to navigate and easy to figure out without much fiddling on your end. With MyRoleplay, you simply enable the addon, and you’ll notice a new tab on your character window for the addon — click on that and you can begin filling out information for other people to see.  XRP is slightly different in terms of accessing your profile, but its profile editor works in much the same way as MyRoleplay. XRP also has something a little unusual — limited cross-realm and cross-faction profile support. This feature is still experimental, and only works with other XRP users, but it’s pretty great for roleplaying realms that are linked together.

TotalRP 3 is much like the other two addons, but with even more functionality. It includes a directory of players, and allows far more customization. The tradeoff for that is that it isn’t quite as intuitive to use, but at the same time, if you’re looking for more bells and whistles, there isn’t a better addon out there. Its predecessor, TotalRP 2, includes even more features, including character, pet, and mount information, quest creation, custom languages, buff and debuff creation, and a lot more. Not all of these features are currently available with TotalRP 3, but they will be over time. TotalRP 2 is still stable and useable, if you’re looking for every trick in the book — but keep in mind that it is no longer being updated, and future patches might break it. 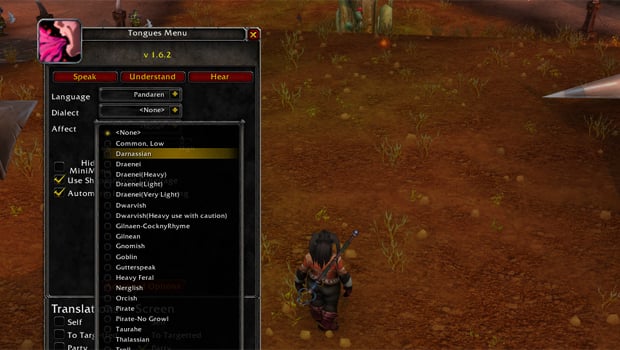 Speaking of languages, Tongues is an addon that involves exactly that — what language you are speaking, and whether or not people can understand you. Each race in World of Warcraft has its own unique language, and if you choose to speak that language, only players of that race will be able to understand what you’re saying — it’ll look like gibberish to anyone else. Tongues does not translate this language barrier. It will not let you speak to players of the opposing faction. It will, however, give you the appearance of speaking another language — and if someone else has the Tongues addon installed, and it is configured to understand the language you are speaking, you’ll be able to talk to each other.

Tongues comes with the ability to speak a lot more than just the default languages in the game, however. All racial dialects are available, as well as several animal languages (druids or hunters might find that handy), Dark Iron, Titan, Nerubian, Demonic, Nerglish, and plenty more, including sub-dialects for known languages. You can pick and choose what languages your character can speak, as well as how fluent you are in each language you’ve chosen — and you’ll passively learn how to speak better over time.

Why would you want an addon like this? Because it allows you to have somewhat private conversations with other players, and it also adds an extra dimension to the character you’re playing. It’s not a necessary addon by any means, it’s simply a cool addon that adds a little more flavor to what you’re doing. 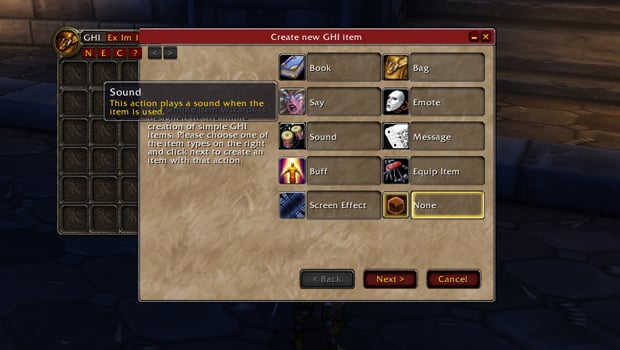 Total RP 2 has a bit of the functionality of Gryphonheart Items, but this particular addon is the mother of all addons when it comes to creating functional items in World of Warcraft. Yes, I said creating items. Actual items that you can trade with other players who have the Gryphonheart addon installed. These items can be just about anything under the sun. You can choose from any of Blizzard’s vast array of icons, put together music boxes that play songs from the Blizzard library when clicked, food that will give you customized buffs when you eat it, books, scrolls, and letters that people can read and pass along — you’re only limited by your own creativity.

If this sounds like a daunting prospect, it is, to a degree. Gryphonheart’s interface has a fairly simple menu for creating basic items, but if you dedicate a little time to getting the hang of the interface, there are a lot of options for making items that are far more complex. It’s a phenomenally useful addon for roleplay purposes, because it allows you to create your own items within the game world for RP campaigns, storylines, events and organizations. The other useful thing about Gryphonheart is that any mail you pick up, books you read, or quest objects that can be read can also be copied to Gryphonheart at the click of a button and stored in the Gryphonheart Items bag, able to be re-read and copied to your heart’s content. It’s very useful if you like to catalog lore books and the like while you’re out and about questing away.

There are tons of other addons out there that can be useful for roleplayers. I like to use chat addons along with my regular roleplaying addons — Elephant is handy for logging roleplaying conversations that I might want to remember later, addons like UnlimitedChatMessage or SoDEndlessChat are handy if you like typing roleplaying responses in a text program and copying/pasting it into chat. The few I’ve mentioned above are just a few examples, but there are way more out there to choose from. Curse has an entire category dedicated to roleplay addons that are all worth looking through. While addons really aren’t necessary for roleplaying, if used correctly they can certainly enhance your experience — don’t be afraid to give them a shot!