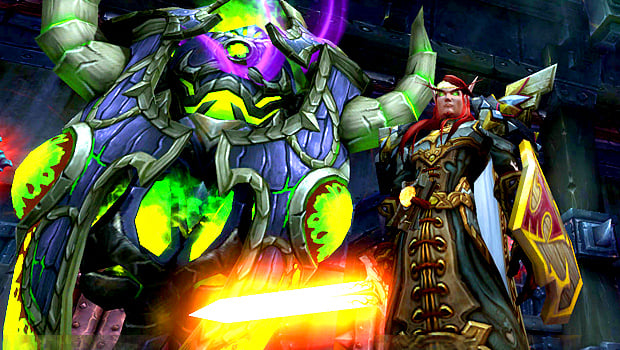 Now that the Public Test Realms (PTR) have the Hellfire Citadel trinkets available for testing, let’s take a look! There’s a pretty good mix this tier — some straightforward stat pieces, some funky proc/on-use ones, and a few really creative ones that should be a lot of fun to play with.

Flickering Felspark (Drops from Hellfire Assault)
The Citadel’s first encounter yields a simple yet functional healing trinket, though the lack of Intellect, Critical Strike, or Haste does bring the Flickering Felspark down a bit in my eyes. If you weren’t able to get your hands on a Spirit/Mana trinket from Blackrock Foundry, the Felspark will treat you well. Its benefit is entirely passive, meaning you won’t have to worry about monitoring an on-use cooldown or figuring out the best time to use it.

Chipped Soul Prism (Source currently unknown)
All those secondary stats might make the Chipped Soul Prism seem absurdly powerful, but it’s actually right in line with other Hellfire Citadel trinkets. (The Felspark has 1083 total secondary stats, while the Prism has 170 Intellect + 850 secondaries.) It’s not the most exciting option, but it’s solid.

It’s also worth mentioning that we shouldn’t look down on the Prism simply because it has Versatility, our “worst” secondary stat. Automatically dismissing a potential upgrade because it doesn’t have our best secondary stat is a common but serious mistake! It’s true that Versatility may not benefit our healing quite as much as Critical Strike does, but this does not mean Versatility is useless! Refusing to consider pieces with sub-optimal stats is like passing up a jar full of dimes because they’re not quarters. 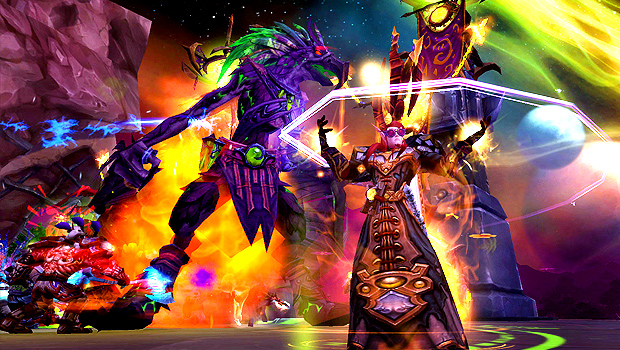 Iron Reaver Piston (Drops from Iron Reaver)
The Iron Reaver Piston is perfectly itemized, with a hefty chunk of Intellect and our two best secondary stats. Cool. Tragically, it’s not on the Holy Paladin loot table, which is totally cruel, and means we won’t be able to get one via bonus rolls or Personal Loot. Not cool.

If your raid team doesn’t use Personal Loot, be sure to let your raid leader know how good this is for you. That being said, a raider should always put the raid team first. The Piston might be a bit better for us than say, the Flickering Felspark, but since the Felspark has Spirit, it’s worthless to your raid’s Mages and Warlocks. As agonizing as it may be, we should probably let the caster DPS players have first shot at the Piston, since we do have other trinket options. Try not to let your tears rust out your armor.

Desecrated Shadowmoon Insignia (Drops from Hellfire High Council)
Like the Piston, the Desecrated Shadowmoon Insignia is not on the Holy Paladin loot table. However, in this case it’s no big loss. Mastery is quite low on our stat priority list, and Intellect procs are tricky — sometimes we’ll get them right when heavy healing is required, but sometimes they’ll proc when damage is light and the effect goes to waste. If one of these falls into your lap because no one else wants it, go ahead and give it a try on fights with steady damage where the proc will always be useful, but I wouldn’t go out of my way to get it. 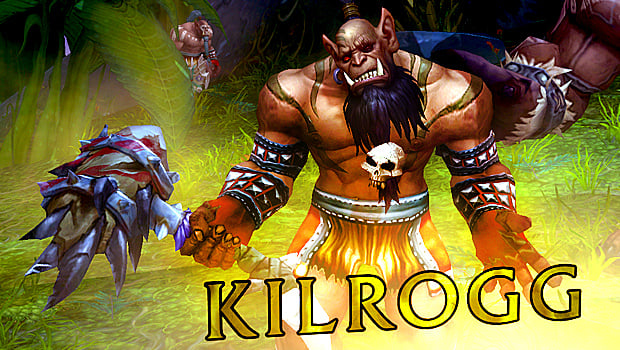 Intuition’s Gift (Drops from Kilrogg Deadeye)
Wow, that is a mind-boggling amount of Critical Strike on Intuition’s Gift. In fact, it might be too much. Yes, believe it or not, we really can have too much of a good thing.

Crit is our best secondary stat, but only until we reach the Holy Shock soft cap — the point where Holy Shock will always crit during Avenging Wrath and trigger Infusion of Light. After we reach this cap, Crit’s value sharply plummets, and we’re better off pursuing other stats instead.

The problem with Intuition’s Gift is that so much of its massive on-use effect will go to waste. The Normal mode version of this trinket provides 3,753 Critical Strike, with the Heroic and Mythic versions packing 4,314 and 4,965 respectively. While the exact amount of Crit Rating required to be soft capped varies depending on our talent and glyph choices, we’ll never need anywhere near this much! A raid-buffed Paladin with no Crit on their gear is automatically Holy Shock soft capped if they’re talented into Sanctified Wrath. On the other hand, a Paladin without Sanctified Wrath only needs 2,096 Crit Rating to be soft capped, and even if they were to use Glyph of Merciful Wrath (which halves Avenging Wrath’s Crit bonus), this number still only jumps up to 3,143.

Simply put, there’s no way for us to maximize the use of Intuition’s Gift without wasting a large portion of its buff, meaning this trinket would be more beneficial to another class. It’s still a strong option for us, but personally, I’d rather see it go to someone who can use it to its full potential. Besides, relying on it to soft cap us during Avenging Wrath isn’t a good plan anyway — all our Holy Shocks would crit while our wings were popped, but having almost zero Crit chance for the following 75 seconds while the trinket was on cooldown would mean minimal Infusion of Light procs, severely limiting our healing options and mobility.

Unstable Felshadow Emulsion (Drops from Xhul’horac)
The Unstable Felshadow Emulsion’s Leech effect (called Shadowfel Infusion) is only triggered from effective healing done to injured players, but any heal will trigger it. Even Eternal Flame heals count, and will constantly refresh Shadowfel Infusion with every tick (though the bonus Leech decreases each time). This functions very much like our Mastery, except instead of our heals granting absorb shields, they grant what are essentially Heal-over-Time effects.

On a test run through Raid Finder on the PTR, Leech was roughly 2-3% of the overall raid healing, about the same amount as my Beacon of Light. Not too shabby! And since Shadowfel Infusion scales with the amount of healing done, it will be most effective when healers are pumping out their strongest heals to cope with heavy damage, which is exactly when we’ll need the free extra healing help.

One cautionary note: Shadowfel Infusion healing does not count toward your healing numbers, but rather is credited as Leech healing by each individual player instead. Remember, your individual numbers shouldn’t matter as long as the boss gets defeated. This is a timeless philosophy and we’ve all heard it before, but with this trinket on the way I think it’s worth reiterating. However, if you are on a raid team where you have to constantly battle to maintain your raid spot, you should be prepared to explain to your Healing Lead just why your numbers seem lower than normal. Similarly, if you possess this trinket and are applying to a new guild, make sure they know when they look at your logs that some of your healing oomph is being diverted to others. 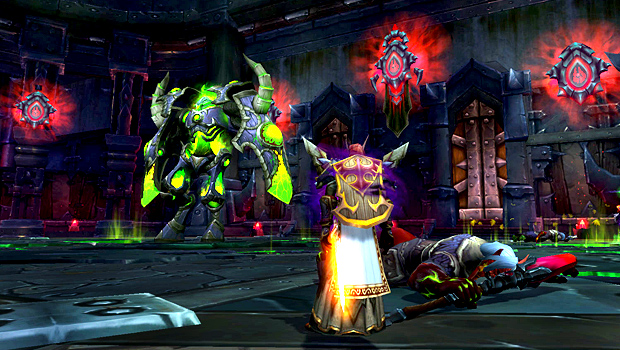 Demonic Phylactery (Drops from Socrethar the Eternal)
After the previous complicated trinkets, it’s nice to see another simple one in the Demonic Phylactery. Great throughput stats, and the mana savings are substantial, though not anything far beyond the other trinkets this tier. I checked a recent Blackrock Foundry log to see how much mana this trinket would have saved me, and it worked out to an average of about 8400 mana per minute/340 Spirit for the Normal version, 9670 mana per minute/390 Spirit for Heroic, and 11,120 mana per minute/450 Spirit for Mythic. (Keep in mind these are just rough estimations — had I used a Mythic log, for example, there may have been fewer spells cast due to additional mechanics, and therefore less mana saved.)

Libram of Vindication (Drops from Archimonde)
A month ago, numbers weren’t yet available for our special class trinket, though we could see that casting Holy Shock would grant us Magnifying Light, buffing our next Holy Light or Flash of Light by an unknown amount. Well, we now know that Magnifying Light is a whopping 80% increase, which is amazing! Considering we quite often follow Holy Shock with a Holy Light anyway (especially with an Infusion of Light proc), this is a huge bonus to one of our primary heals and doesn’t even require us to do anything special. Fabulous.

It will be important to not waste any Magnifying Lights, which means two things — we shouldn’t wait long to cast Holy Light/Flash of Light after a Holy Shock (Magnifying Light only lasts 6 seconds, which is not long), and we should never cast Holy Shock while we have Magnifying Light, since this would overwrite and waste the existing buff. I’m a bit sad I won’t be able to fire off two Holy Shocks in rapid succession anymore when Enhanced Holy Shock procs, but what can you do. I also expect Sanctified Wrath and Glyph of Merciful Wrath (already a popular pairing) will be even more common with the Libram, to maximize the number of Holy Shocks (and therefore, Magnifying Lights) possible in an encounter.

That’s it for the upcoming trinkets! Good luck on the bonus rolls!