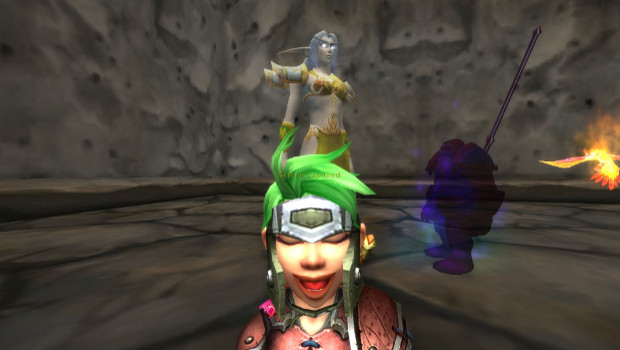 Hi, and welcome to The Queue, Blizzard Watch’s daily column answering your questions.

Every so often I wonder just how strong the various races of the Warcraft setting actually are. I mean, relative to each other. Draenei and orcs are probably around the same (Draenei are a bit bigger and beefier, so they might be a touch stronger, with the orcs making up for it with frenzied rage), but are tauren the strongest? I mean, they’re big. What about worgen, or ogres, or… it’s kind of hard to compare strength when you have a three foot tall race that can use swords twice their own size, one in each hand (seriously, watch a gnome fury warrior sometime) vs. a nine foot tall race. But I do think that, proportionately, gnomes might well be the strongest race on Azeroth.

Either that or I’m just saying it to drive the gnome haters in the audience into a frenzy. Anyway! Let’s talk some Blizzard games!

Q4tQ: did I miss it somewhere, but did Draenor have its own Maarad? Or did he not exist in this timeline?

We don’t know. It’s never addressed in game. Before the expansion went live, there was a quest between Yrel and Maraad that implied that on our Draenor, Maraad and Yrel were close before she died, and that the inverse was true on this Draenor. But it was taken out before release. As of right now, we have no idea if there was a Maraad on this Draenor.

Speaking of having a difficult time finding some transmog gear… any suggestions for my warrior?

I like big spiky shoulders, but don’t know of a good set or what to wear with them. Of course, when it comes to aesthetics or fashion, I’m typically a decade behind so… help?

Let me introduce you to the Onslaught set. Here’s a series of fairly up close SS’s of the bad boy on a draenei. I often use it with Tier 10 (Sanctified Ymirjar Lord‘s) for the chest and legs. Here’s an example. 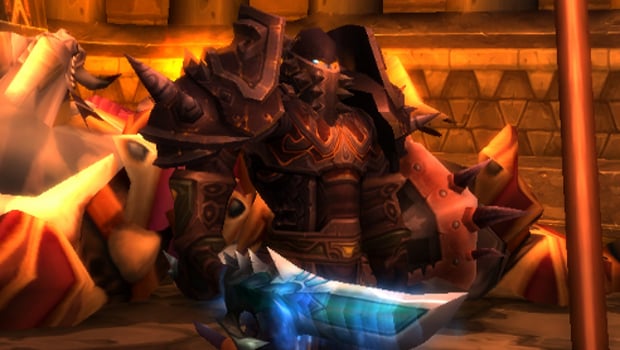 Overall, if you want shoulders with spikes on them, you really can’t go wrong with Onslaught.

Q4tQ: Is it new class and/or race or riot next expansion?

Not for me. I feel like we have enough of both, tbh. If I had to pick one, I’d definitely rather see new races than a new class.

Class balance is an ordeal every expansion, and adding a new class never makes it any easier. I’m leveling a monk as part of our leveling stream and so far, I’m basically just running into groups of mobs and killing them all with a keg throw while everyone else complains about stuff dying too fast. I’m not sure if it’s the item squish, OP brewmaster tanks at level 40, or what have you but the last thing we need is a new class making it all even more complicated, adding another three specs to the game.

New races have meant a new leveling zone (or two) at most. That’s much easier to get integrated. Granted, it feels weird playing a werewolf and no one seems to care, but that’s much easier to deal with than (as an example) a runemaster drawing pretty symbols and destroying whole armies.

As for what new races I want – Alliance gets Vrykul, Horde gets Gorian Ogres.

In WoW, is dinosaur a classification of animals, like the raptors and devilsaurs? Or are they just beasts, that happen to have similar characteristics to our dinosaurs? If it is how they are classified, are diemetradons part of the same group?

I was reading up on dinosaurs, and saw something that suggested the oldest known dino is suspected to be a Eoraptor, a small, bipedal creature. The big guys, especially sauropods, came later, the evolution making them bigger. As humans are bipedal, and generally getting bigger over generations, do you think humans would ever see such an evolution, become that much bigger and going four-legged to hold the weight?

On the subject of why it is unlikely that humans (or any mammals) will get as big as the biggest dinosaurs (technically, the biggest animal alive today, the Blue Whale, is bigger than any dinosaur we’ve ever found) first read this, and this. The short answer is at present, the science does not support the idea that any mammal (humans included) will grow to sauropod size on land, due to the great difference in environment between the Cenozoic (the past sixty five million years) and the Mesozoic era that preceded it for over 186 million years.

So, we know that humans are not likely to grow to sauropod sizes, nor any mammals for that matter, at least for quite some time.  Now for the first part of your question – what is a dinosaur in WoW? Frankly, WoW‘s classification system is much more along the lines of ‘eh, close enough’ – for example, looking at Petopia, there are raptors, devilsaurs and direhorns as tameable pet families. WoW’s diemetradon (clearly inspired by dimetrodon, a pelycosaur related to our own ancestors and not a dinosaur) is essentially a dinosaur in game.

There’s no hard and fast distinction aside from that looks like a dinosaur, that doesn’t in WoW.

Do you think that WoW could do with a boot up the backside? For instance bring in an external writer to be creative with the story. Take it to places the current writing staff might not have considered due to being so close to the lore already.

Let’s be frank – not only does WoW have a lot of talented people working on it, they have recruited from outside to help write the game – Dave Kosak came in around 2009 for example. But let’s not pretend you asked this question as some kind of neutral, ‘do you think they need‘ question. No. You’re asking me, a writer who has written something like a million words about Blizzard’s lore, if I think they should hire me.

Not because I could do a better job than the people they currently have, because that’s manifestly untrue. They have an amazing staff – they designed and executed the 90 to 100 leveling experience and I’m a huge fan of that. Blizzard’s quest and story team is top notch. No, I just think they should hire me because I’m a freaking maniac for WoW lore and I think I could come up with some fun and crazy stuff. This is the same reason they should hire Anne, btw.

I don’t expect to ever get that call, of course. They have great people doing great work over there. I’m no longer egocentric enough to think I could step into that company and do any better than that amazing team already is doing. But wow, I’d love the opportunity to contribute to the game I’ve loved for well over a decade now.

Can you skirt needing Proving Grounds completed if in a full pre-made? Or just can’t LFD, need to walk in?

As far as I know, you just need Proving Grounds to solo queue in LFD, and not in a full premade. Whether that means you can use the LFD interface to randomly pick a dungeon for your full group, I am not sure. I believe you can, but I haven’t tested it.

Okay, that’s The Queue for tonight. See y’all next Tuesday.