The Queue: I’ll take one of those weirdo paintings, thanks 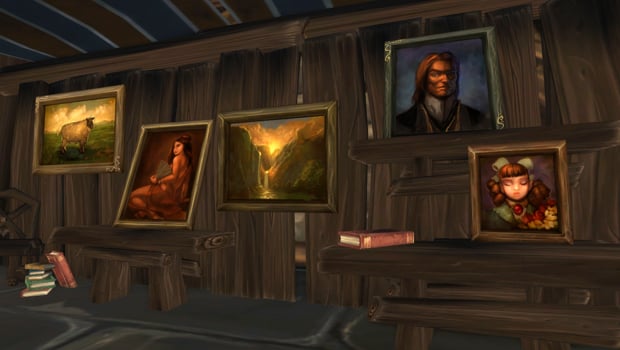 Did you know that Gilneas apparently has an art vendor who sells paintings that blink? I kind of wonder if the worgen and Forsaken are really the worst things Gilneans have to think about.

That’s not a bad idea in terms of giving us enough to do — short spurts of leveling followed by more time raiding, then another burst of leveling (and the story that goes along with it). From my perspective, I wouldn’t mind that at all, because it means we’re pretty much guaranteed a story that spans the length of an expansion, rather than the first third of it or so. But something like that would be changing one of the fundamental ways we’ve been playing the game for the last ten years. Whenever you do something like that, you have to kind of be wary about what player reaction is going to be.

At the same time, though, I think it would make a more plausible separation between gear in raids, and possibly keep a more constant stream of people going through that leveling-heroic-LFR-raiding-leveling route. Not to mention the obvious room it would leave for story beats in between raid tiers. The story could theoretically progress naturally, leading you into one raid tier, then progression from the fallout of that raid tier into the next.

I like the idea, but I don’t really see that on Blizzard’s radar.

Do you think we should get more changes to Professions than simply the 6.2 speed up of Milling?:P

Yes, because professions are a hopeless tangle at this point. We’ve gone from the relatively easy to understand concept of “Learn a profession, make a thing, use the thing” to “Learn a profession, make a thing, then make four more of those things to turn in to a person who will not teach you how to make other things unless you have these things for them to take. Then make a more powerful thing alongside more of these things that serve no purpose other than that the trainer demands them if you’d like to learn to make these other things to learn a thing to upgrade the thing you made already, and later on learn another recipe to make another thing to upgrade the thing you already have but this time you don’t make things to learn it, you turn in this other thing instead and somewhere in the middle, do the hokey pokey. Also, get a garrison building and stick a person in it.”

No, because the sheer amount of changes that professions need to make them a viable, fun thing to do again are more than they likely have time to devote to at this point in the expansion’s cycle.

It doesn’t necessarily need to be new races, but there better be some player customization next expansion. Or is giving my femUndead red hair too difficult to implement?

I am, and always have been, a really huge fan of the Barber Shop, ever since it was introduced. I am also, and always have been, slightly disappointed that the Barber Shop was by and large ignored after it was introduced, since it is one of the most logical places to introduce new character customization options every now and again. Character customization is ridiculously popular, and it honestly doesn’t matter what game you happen to be playing — people are obsessed with making their characters look really, really cool. Largely because they have to spend a lot of time looking at them. Introducing something as simple as a couple of hairstyles, or new color choices every now and again is a really, really easy way to give players a quick perk that they’d really enjoy.

Do we get an explanation for why the Watchers (the Night Elves, not you guys) are suddenly involved on Draenor?

We don’t! The novel Wolfheart actually goes a little bit into the current history of the Watchers — they were reformed by Maiev Shadowsong, but by the end of the novel, most of them are dead. Jarod, Maiev’s brother, was put in charge of a new security detail, although that branch was never given a name. I’d assumed that these Watchers are part of that new security force, but it wasn’t ever clearly stated, nor was it clearly established what would happen to any surviving Watchers who were not loyal to Maiev. So we don’t really know who these people are or where they came from, other than they were presumably sent by Darnassus to help out with the war effort.

Q4tQ: Where does the name “Stormwind” come from? My guess is that the developers just named it that b/c it sounds good, but I wanted to see if there was a lore/story element behind it.

According to the Warcraft RPG guides, the city was named that because of the occasional sudden squalls created by a ley line pattern in the mountains around the city. Although the RPG guides have since been declared non-canon, the explanation makes sense even if you remove the part about ley lines — it’s a coastal city, so coastal storms and winds are probably something the citizens of the city have had to deal with ever since the city was first constructed.

the elephant in the room then. Do you the official removal of flight, now and in future, is gonna affect subs?

I don’t know if it’s an elephant in the room, since everyone is pretty much talking about it. Will it affect subscription numbers? Probably about as much as the addition or removal of any other feature in the game has done. What I think is interesting, however, is that this means Blizzard will need to take a closer look at professions and zone leveling to better design them around the idea that we can’t fly. Archaeology in particular is downright painful when you can’t just hop on a mount and fly from survey point to survey point.

The problem is that we’ve been given something that we’ve really gotten used to having around, and a lot of the last several expansions were designed around being able to fly. They’re going to have to give us some really compelling ground-level content to make up for the fact that we can’t just take off and touch the sky anymore.

Or give us double jump like Wildstar. I’d take that as a poor man’s substitute.