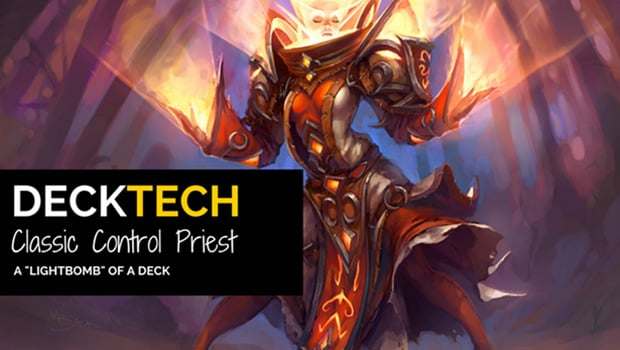 “Matticus, why haven’t you covered Priests yet? Don’t you play one in World of Warcraft?”

Why yes, I do. But there’s only been four of these deck posts written and a Priest deck isn’t one that I’ve played much of yet. Since many of you asked, I’ll forgo writing a Priest deck at week 17 and move it ahead to this week! The Priest isn’t the easiest class to wield. Many plays involve careful set up on your part. You’re not playing aggressively, your game plan is to dictate the match on your terms, which might involve stealing cards from your opponents and using it against them.

Your standard Priest mulligans apply here. Ditch any cards that are supremely expensive, have knowledge of what your opponent is playing and plan as if they’re playing the aggressive form of it. If you’re squaring up against a hunter, plan around Face hunter and not around Midrange hunter. If you’re challenging a warlock, assume they’re playing Zoo or Demon and not handlock. Go with cards like Northshire Clerics and Power Word: Shield. If you’re on the draw with the coin, you can afford to keep more of the expensive cards like a Dark Cultist or an Injured Blademaster (and this card will really help you in the opening turns).

Northshire Clerics, Dark Cultists, and Injured Blademasters will want to hit the board early. Take advantage of your hero power to trade effectively with your opponent’s minions. If you can remove two of their minions for every one of yours, you’ll be in a great shape. Having the Injured Blademaster out and preserving it with your hero power or other healing spells can be used to maintain board control against your opponent.

The inclusion of a Blingtron might be odd but it serves two purposes. First, it can combine effectively with Harrison Jones to provide your opponent with a weapon that is immediately removed while replenishing your hand. Second, on it’s own, it has a chance of removing an even more dangerous weapon that your opponent might’ve been wielding. I’ll take an Eaglehorn Bow over a Doomhammer or a Gorehowl. The rest of your mid game continues to be board dominance.

What about your board clearing tools? You have a Wild Pyromancer to help wipe out or soften any low health minions. The priest hero power ensures that the Pyromancer remains on the board. The threat of Auchenai Soulpriest and a Circle of Healing to inflict 4 damage to anything on the board is enough to ensure your opponent isn’t going to overwhelm the field. Finally, you have the pair of Holy Novas to help swing potential combat situations in your favor with the healing for your minions and the 2 damage to theirs.

Oh yes, and Lightbomb. This list includes only a single copy but many priest decks are starting to appear with two copies.

There’s a number of ways and tricks to close out the game. Vol’jin, Sylvanas, and Ragnaros serve as excellent finishers. Sylvanas almost forces your opponent to sacrifice their minions — use her as a control mechanism. Mind Control is another option, you can steal your opponent’s bigger minions to use against them. Some lists run Mind Control, others don’t. Entirely up to you.

While Amaz is well known for bringing a priest into tournaments or using them on ladder, he isn’t the only one. Brian Kibler used a priest deck during week 4 of the Kinguin tournament. There’s also a European streamer who’s reached legend multiple times using nothing but a priest by the name of Zetalot.

The Shrinkmeister combines quite well with both Shadow Madness and Cabal Shadow Priest in stealing opponent minions and putting them to work on your side of the board.

If you’re running up against multiple hunters or warlock decks playing early game minions, consider swapping in a Shadowboxer, a Zombie Chow, or a Deathlord to buy time. If you’re still struggling, an Antique Healbot will provide an additional health buffer. As you can see, the list of alternate priest cards can be quite expansive. The priest has the advantage of having numerous cards in their toolbox and can adequately deal with virtually any situation or deck provided they live long enough to do so. Other cards? You could add in a Sludge Belcher, Loatheb or an Emperor Thaurissan even. 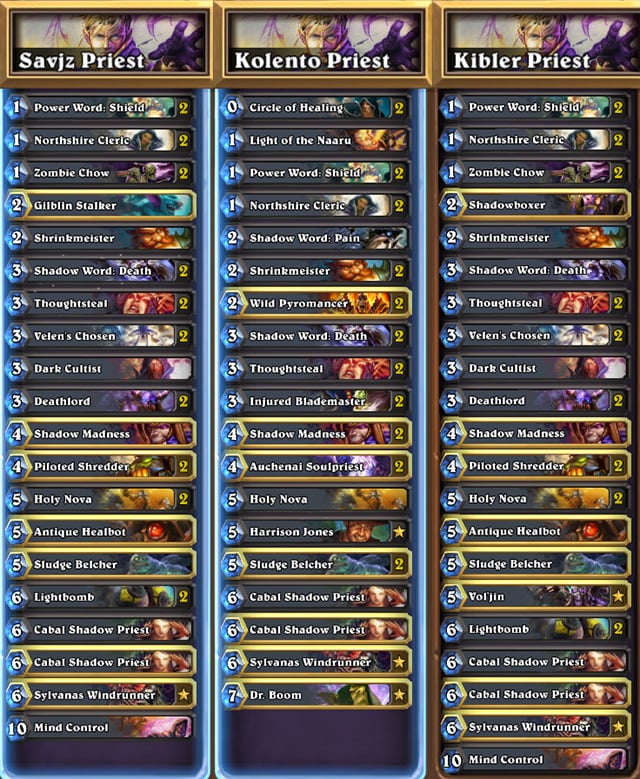 Druid: Fast druid’s key to victory is to get off their combo at turn 9. Stay above 14 health to survive the Force of Nature and Savage Roar tandem. Your Lightbombs and other AoE spells have to go to work here and control the board in your favor no matter what druid deck your opponent brings. Ramp druids rely on playing bigger minions earlier than normal.

Hunter: Northshire Cleric is your MVP early on. Most Face hunter cards have only 1 health and their damage isn’t high enough to kill the cleric outright. They aren’t going to trade their Wolfrider into the cleric. Ironbeak Owls and silences are saved for your taunt minions. Look for your Shadow Word: Pains here. Be aggressive with your hero power on yourself as you approach the midgame. They’ll eventually flame out and run out of cards — the longer the game drags on, the higher the chance of you winning. Midrange hunter variants will start out similarly, but now your cards like Lightbomb and Auchenai Soul Priest with Circle of Healing will make a larger impact. Play those when they’ll hurt your opponent the most. Your Cabal Shadow Priest can go after key cards, such as their Mad Scientist.

Mage: Mech mage is winding down so you might not encounter these as much on the ladder. Mechwarper is priority number one. If unchecked, mechs will start hitting the board fast and you will get overwhelmed, keep a Shadow Word: Pain in hand against it. With Freeze mage, odds are now stacked against you. Exercise caution on turn 5 as the mage can initiate their Frost Nova and Doomsayer combo to clear the board. Their victory conditions involve playing an offensive Alexstrasza, so prep your Healbot or Holy Fire to get your health back up to a safer level. I had one game against Freeze mage where my Deathlord died and triggered an Alexstrasza into play immediately, and they conceded after that. There aren’t many minions in Freeze mage so you can feel safe the Deathlord. 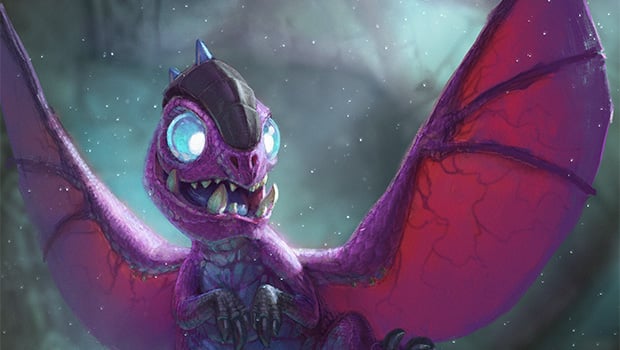 Paladin: I haven’t seen enough Dragon paladin decks to gauge how effective a priest is against them. Midrange paladin decks can get to you — use your AoE to counteract their Muster for Battle. Don’t overextend too much until their Consecration and Equality have been spent, because you’ll eventually get the upper hand.

Priest: My only advice against the mirror match is to not play two Northshire Clerics at once. I’ve seen far too many games where a Circle of Healing with a full (but wounded) board causes that player to almost draw out their whole deck. One Cleric is okay as it means that if the opposing priest uses their hero power, you stand to benefit.

Rogue: Miracle rogue continues to be one of those matchups that haunt me. Their plan is to disrupt your board by returning minions to your hand or outright killing them. Tinker’s Sharpsword Oil can ruin your day with its explosive burst potential.

Shaman: Hexes and damage spells can render your minions useless. One thing I’ve seen newer priest players do is stack the same minions with Power Word: Shield or Velen’s Chosen, only for that minion to be Hexed the following turn. Don’t fall into that trap until those crowd control cards are no longer a factor. The shaman game plan is to batter away at your health before unloading their burst spells like Lava Shock and Crackle directly at you. Remain aware of that possibility as the game goes on and make sure you’re tracking their available mana crystals and when they’re overloaded.

Warlock: Handlock continues to be one of the tougher games for priest players. Your Lightbombs will want to be saved for when their Molten Giants or Mountain Giants hit the board. Shadow Word: Death and Big Game Hunter are other key cards that you’ll want to consider adding in. You’re going to be on the clock because once Lord Jaraxxus enters the board, the uphill climb to victory becomes harder.

Warrior: I once witnessed a neat play where the opponent played a Grommash Hellscream (without it being damaged and triggering the extra attack effect) and the current player dropped a Shrinkmeister followed by a Cabal Shadow Priest to immediately commandeer him. Such a dirty but hilarious play. Against warriors though, be cautious of their weapons and recognize that your Northshire Cleric could be vulnerable immediately to their Fiery War Axe. Try to have some buffs or extra defense up before the Cleric hits the board. Look for a Zombie Chow or a Dark Cultist in your opening hands.

That’s the deck! Enjoy it and let me know how you fare!